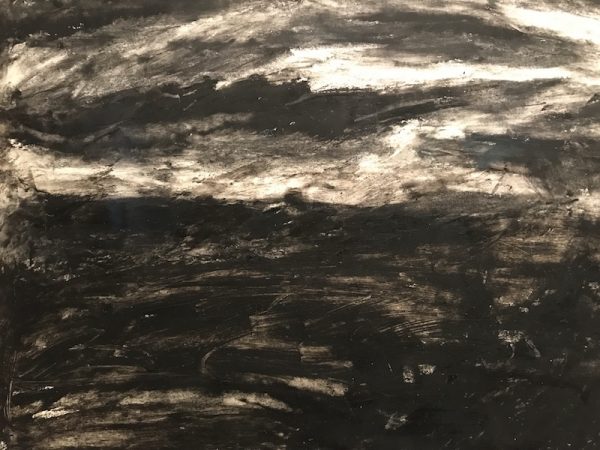 Tina Fuentes has two large exhibitions on view in Lubbock: Marcando el relámpago at the Museum of Texas Tech University, and Nubes tan negras, on view at the Louise Hopkins Underwood Center for the Arts. Both bodies of work are a result of  collaboration with scientist Dr. Eric Bruning, who studies the atmosphere, trying to determine if there is a link between the length and texture of clouds and the length of a lightning strike.  (The project is sponsored by the National Science Foundation.)

I spoke with Fuentes in her studio nearly three years ago, at the beginning of this project. She was animated as she talked about how Bruning was looking at the clouds, not just the air current or moisture, but using art words — “color” and “texture” — as part of his process. Fuentes’s sources range from the plains of eastern New Mexico and west Texas to the Sonoran and Chihuahuan deserts. Through a range of mediums — metal, paint, video and performance — she has acted as creator, calling forth the heavens through her marks: marcando el relámpago. 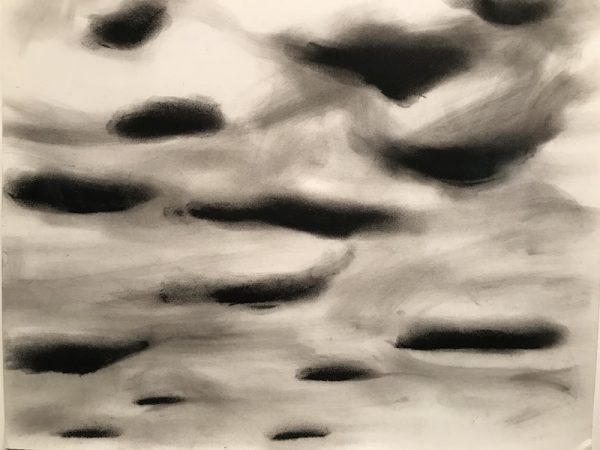 Some of these paintings, like Nube stratocumulus negra V, seem pulled directly from the unseen periphery in Goya’s Pinturas negras, such as Saturn Devouring His Son.

Others seem more innocuous, but when you look at them long enough, some long-buried instinct kicks in, telling you to run from the dark matter pooling at the bottoms of the fluffy, concealing forms of cloud cover. In El Movemiento, Fuentes’s sweeping calligraphic strokes snake along the paper, ambling along until their next clash. This is the nature of this part of the world, the Panhandle. The expansive sky is our defining landscape trait, with drop-shadows from petite clouds peppering red dirt fields. Most of the time. Then there are those few days a year when you may see the sky before you see the news or hear the tornado sirens, and you thank God you bug-bombed the storm cellar last month, and that you have a storm cellar at all. 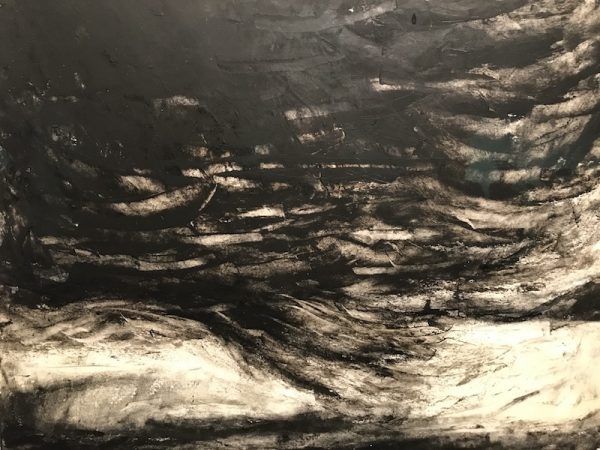 Sometimes it feels like it’s best to avoid cliché when it comes to painting subject matter — clouds, skulls, butterflies, boobs, heaven and hell, bowls of fruit, etc. But the trick isn’t coming up with new stuff to paint — it’s painting the familiar in a new or unexpected or unlikely way. Fuentes’ paintings look like clouds, but not as accoutrements of the sky. Her clouds are the cradle for natural disaster, the tumultuous wrecking force, the striking sinew of pure electricity.

On view at LHUCA in Lubbock through Dec. 30.

This article originally appeared in slightly different form on Dec. 8 in The Bowerbird, an art blog in Lubbock, TX.

I read with interest this article about Tina Fuentes’s and Eric Bruning’s exhibitions featuring their collaboration sponsored in large measure through a National Science Foundation grant. I noticed that there was a link to the Louise Hopkins Underwood Center for the Arts but no link to the Museum of Texas Tech University. So, for your interested readers here it is: http://www.depts.ttu.edu/museumttu/visit/marcandoevents.php

Keeping me honest on accreditation, Peter!