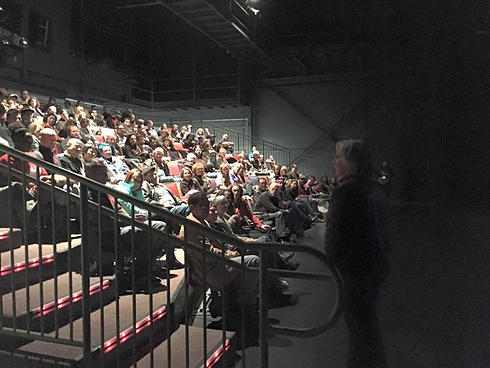 Perhaps it’s because we fail to correctly identify our geographical location, or maybe because we are 5 solid hours from more populous areas – but it seems that Lubbock gets overlooked.  Obviously Texas Tech plays a major part in shaping the nature of emerging artistic attitude in Lubbock, but that’s not all we have on our plate up here.  Here in the Panhandle (that’s right, not West Texas) of the Lone Star State there is a thriving art community where thousands of potential patrons are ferried to dozens of galleries each month, where successful artists can come to a residency with solid facilities available in clay, metal fabrication and print, and where a large number of sculptors, sculpture professors, and students recently melded together at the Texas Sculpture Symposium 2015.

On the first evening of the symposium, Judy Pfaff started her presentation to the packed Firehouse theatre at LHUCA. Seeing her new work was akin to having a precognitive glimpse of the cover of ICS Sculpture mag–surely coming to a newsstand near you next year. I was struck by formal choices that echoed my own affinity for circular and spherical themes.  It was pleasant to be gently guided through a menagerie of images of recent ambitious projects by such a humble presenter.

At one point she mentioned her MacArthur Fellowship and showed the fruits of receiving such an honor. My ignorant bliss of the MacArthur Foundation was only shown later when I asked fellow sculptors of the process of nomination and was rewarded with their dumfounded scathing.  At any rate, her keynote address was an attenuated glimpse into her studio practice culminating in images of finished installations and grandiose media gestures.  As a teacher, I gravitated to some of her closing statements, like “what keeps me going is learning overtime…” or when talking about studio process she said, “change it, do something, learn something.”  In her investigation of media in the studio she mentioned her objects – “I move them around until I can figure out why I’m using them.”  Her language and poetic arrangement of pedestrian media reminded me of something I read recently from Radio Free Albemuth:

There was a beauty in the trash of the alleys that I had never noticed before; my vision now seemed sharpened, rather than impaired. As I walked along it seemed to me that the flattened beer cans and paper and weeds and junk mailed been arranged by the winds in patterns; these patterns, when I scrutinized them, lay distributed so as to comprise a visual language.

After her talk the group walked across the street to the CASP gallery to mingle and view small sculptures brought by the attendees, everyone with their mandatory badges in tow.  Towards the end of that first night of the conference I had the pleasure to talk briefly with Ms. Pfaff about making in general – and the challenges of outdoor sculpture.  She jokingly chided me about answering “yes ma’am” to her questions.  I felt a small twinge of Texan pride (in the same way I feel guilty enough to take my hat off when someone is praying.)  After another obligatory “yes ma’am” to an inquiry, she was rapidly whisked off —I assume to an even more intimate dinner.  It hit me then, and at other times through the conference, that it was those congenial moments between near strangers that enabled a connection though mutual interest in media manipulation — intensified in the scale and scope of our small, yet potent symposium here in the middle of the Plains.

The next day included talks on Sculpture in the Digital Age, Opportunities for Artists in Lubbock, and a crowd-pleasing iron pour in the afternoon. The weather broke perfectly for the Texas Tech sculpture students lead by William Cannings to pour a few aluminum pieces, and for the Texas Atomic Iron Commission to pour several iron pieces.  Honestly, other than the evening get-togethers, I enjoyed going to the pour more than any part of the symposium –but not because of the warning cowbell, whoops and hollers when metal flowed, or even the sparks caused by the occasional drizzle.  I had the pleasure to view the occasion with fresh eyes. I have seen and participated in many pours, but it was a great joy to teach my friend and current CASP student, Nick Dragga, how to think in negative space in the course of about an hour (he asked all the right questions.) The only problem with a pour at a function like this is that it splits the waters between those working and those who were presenting.  Scheduled for the same time as the pour was a digital 3D demo in the Architecture building, so I was torn by not being able to be in both places at once, parallel to my lament over a seemingly obvious division between academia and grit-your-teeth Texas metallurgy. 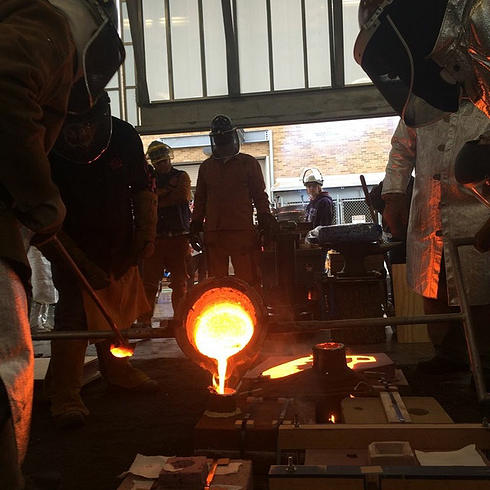 Eventually everyone met back up for dinner and drinks later in the evening.  I learned of the Texas Sculpture Conspiracy from a good sculptor friend Joe Barrington, which, contrary to its ominous title, is in fact a growing group of sculptors helping each other haul work all over the country. I got to see the delivery of three new commissioners to the Texas Atomic Iron Commission- two of which are good friends: Suguru Hiraide received the coveted Secret Asian Division honor, and Joel Kiser who rocked his new Roughneck Division duds for the rest of the evening.  Joel and I casually walked over to the Texas Tech student show exactly one block South/South-East from our dinner accommodations and we strolled through the grad and undergrad Tech art show. It was nice to see good student work framed by a vintage, barrel-roofed warehouse in the Arts District, but nicer still to talk with current students as though we were perceivably distinguished alumni.  It was a very pleasant evening that seemed to end to abruptly until someone mentioned the Unicorn, and the La Quinta Lobby, and bourbon.

This article is reposted with the kind permission of  The Bowerbird, Hannah Dean’s blog of art Review in Lubbock, TX.  Images Courtesy of Alberto Careaga and Harrison Brooks

I’d love to learn how to do that and expand my abilities as an artist. Very inspiring. Thank you