Cody Arnall’s “Who’s Got a Price on Their Head?” (vs. the Selfie) 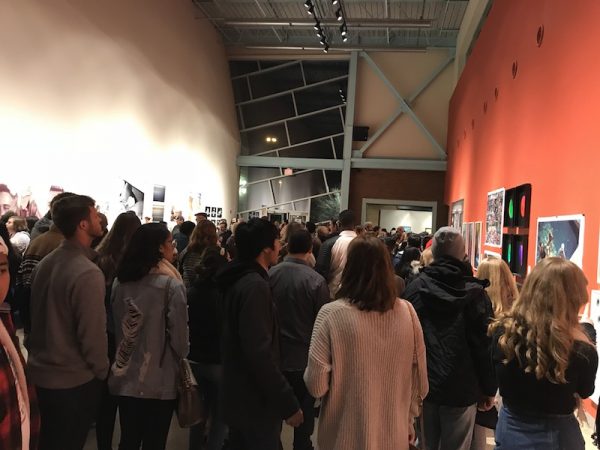 Lubbock’s First Friday Art Trail is always popular, but in years past the winter months have been notably less well-attended. Which is why, after dealing with the shoulder-to-shoulder crowds at the Louise Hopkins Underwood Center for the Arts at First Friday this month — and heavy lines waiting to get inside 5&J and the TTU Satellite gallery at CASP — I came away feeling proud of Lubbock for turning out in the cold. Still, in the midst of a lot of happy and chatty people looking at art (and sometimes touching the art; that’s something you can just about get away with in Lubbock), there were some weirder things I witnessed that night, and Cody Arnall’s room-sized installation Who’s Got a Price on Their Head? at LHUCA unwittingly framed one of these moments. 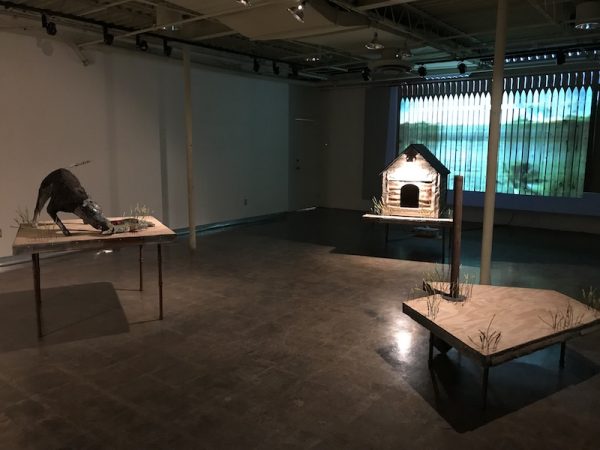 I entered the John F. Lott Gallery at LHUCA — a small, single-entry room that the Lubbock-based Arnall had blocked off with a swath of fencing, forcing viewers to single-file into the room. The installation is comprised of three platforms, the first hosting a dog mauling the neck of a cat. With teeth and balls bared and red pools surrounding the presumably dead cat, both animals have a pock-marked, waxy looking surface. It’s a pretty bleak sculpture. The next platform is trimmed with a few blades of greenery, with wavy edges that reference Bikini Atoll, where Arnall’s grandfather was a military telegrapher until the Cold War, and that beach later serving as the site for nuclear tests. The third stage sports a dog-house sized metal structure, which could be referencing the actual dog, an abusive family history, or the base where his grandfather spent time probably in isolation: likely all three. The final wall of the room is flanked by another fence overlaid with a projected loop of the Bikini Atoll tests’ mushroom-cloud footage, in seafoam and acidic green. 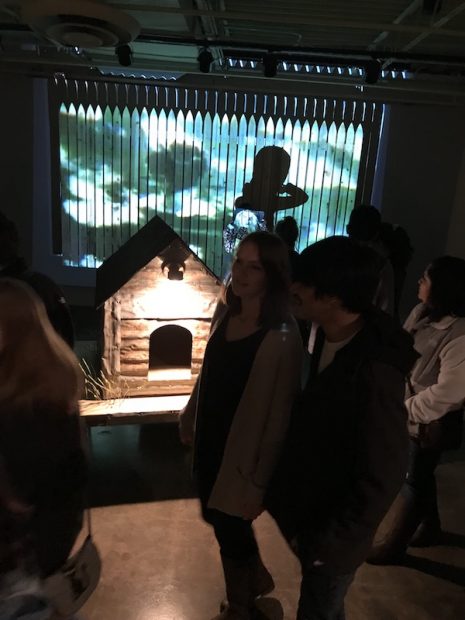 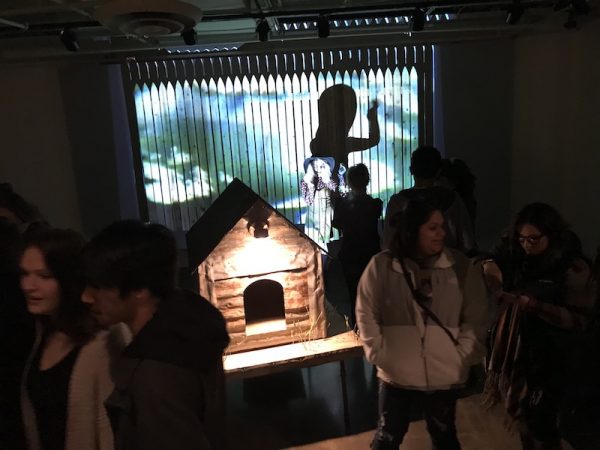 Not part of the artwork: a young woman posing for a photo, with the video projected over her body and face. She is smiling with all of her teeth, her hands thrust behind her head, creating a diamond shape with her arms, and it seems she quits breathing for the duration of the photo session. Her friends snap the picture, and she eagerly trots over to them to make sure she approves of it, or to admire her good idea. The contrast of the impromptu photo-shoot and the subject and content of the installation — family history of alcoholism and abuse, mutually assured destruction, and a dog ripping the family pet cat apart — was too much for me. 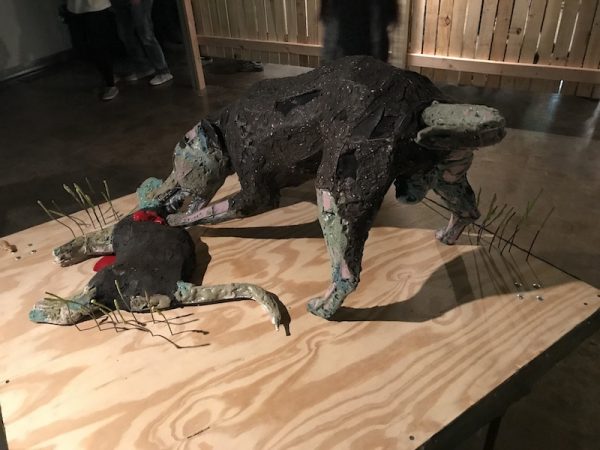 As symbols, a dog and a beach are so accessible. Arnall’s foil is subtle, by way of a single layer of fence-until-you-see-it’s-a-bomb. This installation isn’t selfie fodder in the vein of a Kusama room. I think it’s the direct opposite. Arnall’s work and statement are pretty cut and dry here; this is what I love about his show. This room is, visibly and notably, a signpost pointing to power that is embodied and also power that controls all bodies. A person taking a photo in front of a terror-inducing image is a fairly accurate well-check for my generation. The violence that we enact upon each other, re-contextualized by a viewer as not only non-threatening but as photo-op decor, is a pretty heavy way to ponder aggression and suffering in the chronic “am I going to perpetuate this shit?” sense. After all, big themes like isolation, nuclear decimation, and tearing each other’s throats out have become old news, even while (and because) we’re so inundated with and aware of and even numb to their constant reality.

This piece originally appeared in slightly different form on Feb. 3, 2018 in The Bowerbird, an art blog in Lubbock, TX.