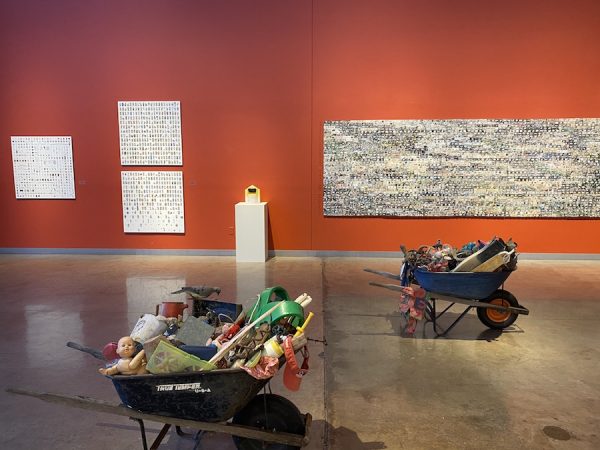 In 2011, The Economist welcomed us to the Anthropocene, the age of man. Or more specifically, an earth era defined by the role of a single species.

Two stellar but very different exhibitions in Lubbock for its First Friday Art Trail in January hit upon eco-centric themes. First, the Louise Hopkins Center for the Arts (LHUCA) in Lubbock is hosting Ditched, a show of Becky Wilkes’ project that involves sculptures and archival inkjet photographic prints of her finds when trash-combing Eagle Mountain Lake near Fort Worth, Texas during the 2014-2015 drought. (A quick search of the Texas Drought government website shows that nearly 8 million residents are still living in drought conditions in 2020.) Ditched is the most recent in a continued thread of LHUCA programming centered on the environment. 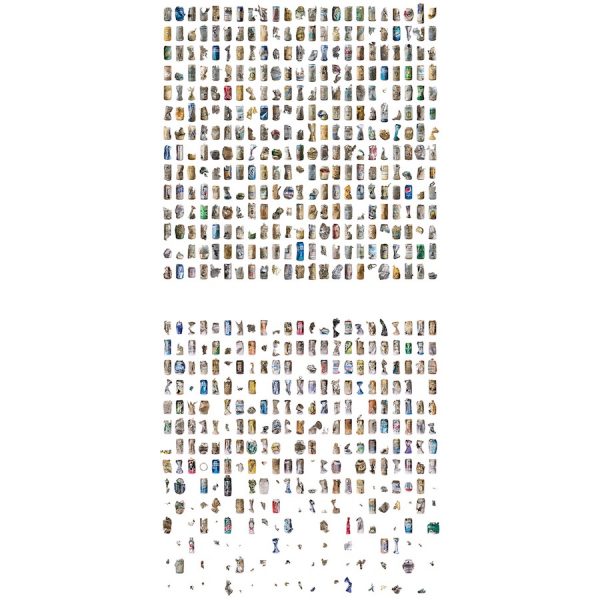 The mixture of contrived installations (like dirty objects placed in fresh “Lubbock drinking water,” and two wheelbarrows full of detritus in the center of the space) and cleanly documented, archival (in style) prints flank LHUCA’s long, red exhibition space. I could take or leave the sculptures, but Wilkes’ removed and stark flat photographic work is tremendous. The obsessiveness of the prints is visually and conceptually appealing. Removed from their half-buried lakefront sites, water bottles with the all the charm of used condoms suddenly become aesthetic, once they’re scanned, grouped, printed and mounted on Dibond. Weird. 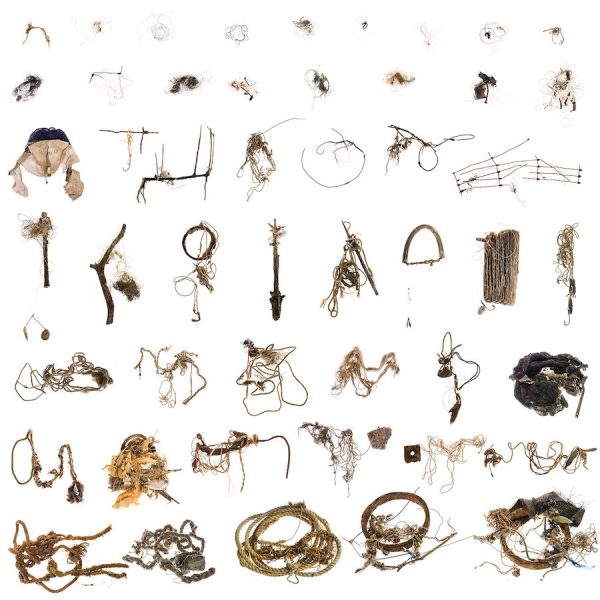 And while there’s a built-in sterility to the white-background prints, that sanitizing doesn’t win out. The trash collections are anthropomorphized: in Drinking Buddies, Wasted Buddies, which shows us a vertical diptych with booze cans in different stages of decay, some are unrecognizable as cans at all. For The Fallen, three crusty, tattered flags are pinned to the wall and maintain a ghostly quality. Snag’D, an image of 48 snarls of fishing line in varying stages of wear, reads like clumps of human hair.

When I was in  elementary school, my family would spend Sunday mornings at Brantley Lake in southeastern New Mexico. I would comb the gray sludge beach that was peppered with salt cedars and look for fishing lures, and later sell my haul to my brothers. These memories flood back as I comb through Wilkes’ images. It’s incredible how familiar litter is, how much it is part of my childhood memory base. All of our outdoor spaces — parks, ball fields, beaches — are filled with the scraps of consumer and throw-away culture. It feels strange to help my toddler gather up crushed Coke bottles and beer cans at every playground, only to move to them to the trash barrel a few feet away. Strange, because I realize that we are “disappearing” the objects by relocating them to the ocean or some landfill. Everything is bigger in Texas, so it’s no wonder that the island of trash overtaking the ocean is compared to us — it’s the twice size of Texas. Horrible, awe-inspiring, nearly patriotic?

A trolling bucket contains individual card images from the largest flat print in the show, and the viewer is invited to play a game and “collect all the cards.” The game instructions include the words “EXPLORE, EXCHANGE, COLLECT, RETURN” in all caps, almost as admonitions. It seems they ring hollow — for years news outlets have lamented the logistical burden of recycling (cities can’t afford it, China won’t accept it, etc.) — as Americans create about five pounds of trash per day per person. And that data is from 2015. Metal straws or not, I can’t imagine that we are suddenly “doing better.”

Two of the prints in Ditched depart from the archival format and become near abstractions, and also very painterly. Along with Gregory Eddi Jones, Becky Wilkes is shifting my bias against digital art. The mad, swirling, colorful Take Out and Bad Wrap are intriguing because of their flatness. Where a label seen in Bad Wrap: 2015 wrappers collected from 1 mile of lakefront should crinkle and shutter in the air currents, it can’t. These images are permanently frozen, static, semi-transparent, dead. But in an heightened and terrifying way. 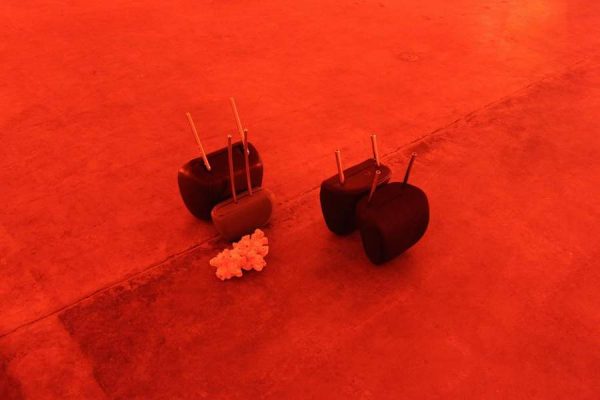 Another First Friday exhibition in Lubbock that took a deep dive into Anthropogenic themes was Adam Farcus’ Into Shadows, Terrors, Years at the Texas Tech University Satellite Gallery, with a performance component across the alleyway at in a studio at Charles Adams Studio Projects (CASP). The entirety of the Satellite Gallery installation was lit by heat lamps. I had seen photos of the work on a social media page before I saw it in person, and nothing prepared me for the physical discomfort of trying to examine a work with  bright red lights hitting my eyes. It was nearly migraine inducing, and clever. Farcus employed found objects — a small grouping of dead coral and upended car headrests created a compellingly stark piece. The physicality of the coral and metal rods played off of each other, with a sinister nod to the fact that many coastal cities could be underwater soon. The highlight of Farcus’ show was a letter from Texas state representative Jodey Arrington, hanging on a clipboard. It bookended the work; Arrington enthusiastically addresses Farcus’ concerns about global warming with the punchy phrase “the Shale Revolution,” in lieu of “Fracking.” The juiciest bit: the disclaimer at the bottom of the page that it is printed on recycled paper. 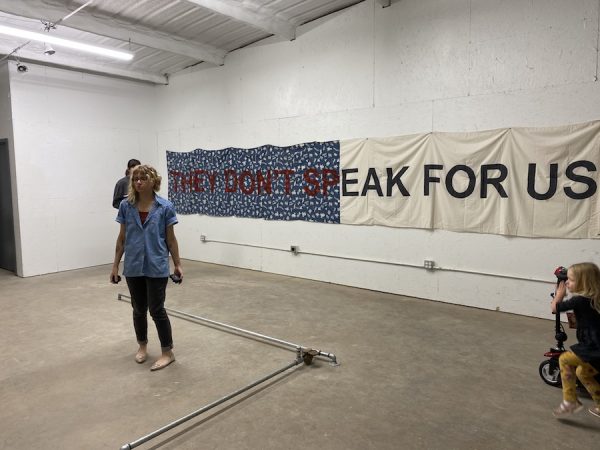 An Adam Farcus-directed performance at CASP

Wilkes’ and Farcus’ work falls into the same “we’re screwed” vein as that of many contemporary artists, like the drawings in Robyn O’Neil’s recent retrospective We the Masses. With Farcus, the human is present through written responses to global warming; in Farcus’ directed performance in CASP Studio D, young people carried rocks over pipes, and the walls were flanked with quilt-like banners, with one that read: “They Don’t Speak For Us.” This sounds like a Greta Thunberg quote, though I’m not sure (google didn’t help.)

In any case, with this performance, Farcus illustrates that the burden on and for the world’s youth is self-evident, and growing more so by the year. Conversely, with Wilkes’ show, there’s the absence of the human, and we’re left with images of what future archaeologists would find in our wake. I guess that is the contradiction here: it is exactly the presence of Homo sapiens that litters and burns the world to the ground, and we will erase ourselves. There are something like 316 million tons of human on earth, and 700 million tons of domesticated animals. Bugs, bacteria, and plants seem to be doing okayish, but there is only a fraction of left of TOTAL wild mammals, weighing in at 100 million tons. Humans often differentiate ourselves from other mammals by our “consciousness,” but as a collective, we seem to be no more introspective or less self-interested than say, cancer.

Welcome to the Anthropocene, indeed.

Becky Wilkes’ “Ditched” is on view through February 1 at Louise Hopkins Underwood Center for the Arts, Lubbock