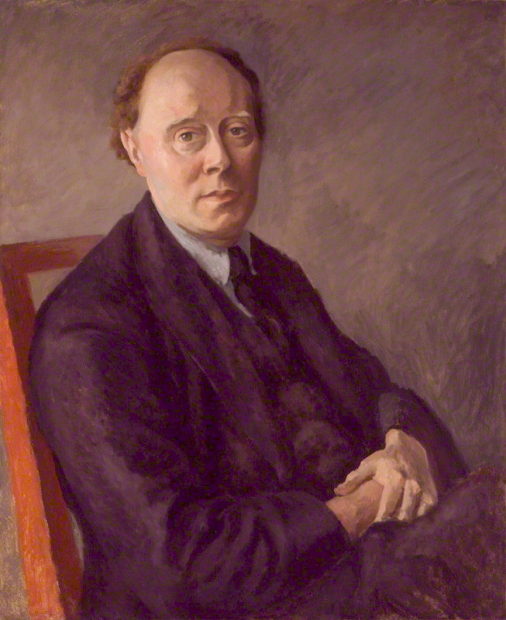 A year or so ago I found an old paperback copy of the early 20th-century art critic Clive Bell’s theory of art. I picked it up because I admired the arrogant confidence of a critic who would write a little book and title it Art. Not Medieval art or Renaissance art or Modern art. Just Art. And it didn’t disappoint. The first sentence of Bell’s preface is disarmingly humble: “In this little book I have tried to develop a complete theory of visual art.” No big deal.

The second sentence equivocates, but does so at least with elitist panache. Bell writes, “I have put forward a hypothesis by which the respectability, though not the validity of all aesthetic judgments can be tested… .” This clues us in to Bell’s personality. More or less a fallen aristocrat who thought that all art between Giotto and Van Gogh was garbage, Bell lets us know that even if his theory can’t really be proven, you’re probably an aesthetic rube if you have no idea what he’s talking about. The book is dripping with irony and sarcasm and I agree with most of what he writes. I do love a bastard. But when I finished, Art just didn’t sit quite right.

Bell isn’t some random, forgotten critic. He’s one of the earliest and most hardcore formalist art critics of the 20th century. Along with Roger Fry, he championed the abstract, formal qualities of painting over and above and at the expense of what they both called the “associated ideas” triggered in viewers by representational content. His theory begins pretty simply: “…either all works of art have some common quality, or when we speak of ‘works of art’ we gibber.” Seems fair enough. What is it that an object has to be or do to be “art?” Bell demands, as we all probably should, some justification for the designation of stuff as visual art.

Early on, Bell asks what quality is common to  “…St. Sophia, the windows at Chartres, Mexican sculpture, a Persian bowl, Chinese carpets, Giotto’s frescoes… and the masterpieces of Poussin… and Cezanne?” Answering himself, he replies, “Only one answer seems possible — significant form.” Bell’s Significant Form is, “…lines and colors combined in a particular way, certain forms and relations of forms, [that] stir our aesthetic emotions.” Well, obviously. Or is it?

Combined in what way? And what are these “aesthetic emotions?” The answers to both of these questions are, it turns out, entirely subjective. The only evidence of the presence of Significant Form for Bell is personal emotional experiences. To charges of relativism he replies, “…about taste as everyone is proud to admit, there is no disputing.” Do the formal properties of Giotto’s Kiss of Judas not move you? Do the pale colors and architectural folds of the disciples’ and Romans’ robes not excite your aesthetic sensibilities? Are Crate and Barrel and Mycenaean ceramics all the same to you? Look, if you don’t get it, Bell basically tells us, that doesn’t mean you’re stupid, it just means you have no aesthetic sensibility.

Bell does manage to lay a little grace on most human beings (since most human beings can’t tell art from a hole in the ground) by separating intellectual acuity from aesthetic sensibility. He gives art and science their own realms of autonomy. But for Bell there’s even hope for the unwashed. The good critic’s job, Bell writes, is to “…make me see in a picture that had left me cold things I had overlooked, till at last, receiving the aesthetic emotion, I recognize it as a work of art.” He continues: “But it is worthless for a critic to tell me that something is a work of art; he must make me feel it for myself.” Bell can’t get away from the notorious fact that the category of art depends almost entirely on that loosey-goosey category of “feelings” and doesn’t fit all that well into theoretical frameworks.

The ability to recognize and experience real art is, for Bell, a-historical and a-cultural: “To appreciate a man’s art I need know nothing whatever about the artist; I can say whether this picture is better than that without the help of history… .” As creepy and totalizing as this statement is, it’s fairly tough to brush aside. Bell recognizes that good art is derived from formal, visual properties — lines and colors as he says.

I agree that formal competence is the ground floor for a work of art to begin to do anything, even fail. Most people, artists and non-artists alike, recognize that this is how art works. We see paintings or other objects all the time that are so pitiful they can’t even really be said to fail. But the fatality in Bell’s theory is that he insists that formal concerns are the essence of the category of the aesthetic. Once we start talking about “essences” we’re already dipping our toes in murky waters that often conceal dead bodies. And more confusing (for Bell and us) is that he tries to wring religious experience out of matter-of-fact phenomenology. Priests have the good sense to rely on sleight of hand and defer to mysterious meaning behind the reality. Bell wants the meaning to come directly from the reality of the surface; he wants to analyze visual art up until the point that it results in an emotion that he compares to religious ecstasy. Then he stops. For him, that’s the end of the aesthetic discussion.

As an artist I’m sympathetic with his reluctance. The last thing I want to do is demystify all the mysterious fun and struggle I have in the studio. Bell writes that there are many other aspects of visual art — historical, political, social — that might be interesting, but none of them are aesthetic. I’m not so sure I agree with this like I used to. I’m a formalist first, but I’m also a historian and a storyteller. Bell demands art objects be ends in themselves. But the social purposes of narratives inform form, and the form then bleeds back into the narrative. Form and narrative content are locked together in a ring, one bleeding seamlessly into another.

But I do believe Bell is right when he concludes Art by defining it as secular religion: “He who goes daily into the world of aesthetic emotion returns to the world of human affairs equipped to face it courageously and even a little contemptuously.” In the absence of real religious conviction and reliable political stability, what binds society and the art it produces together? We can’t see it yet, but we’re building new religions. Right now they’re looking like right-wing and left-wing death cults. Courage and contempt seem like exactly the right ingredients for our regime.