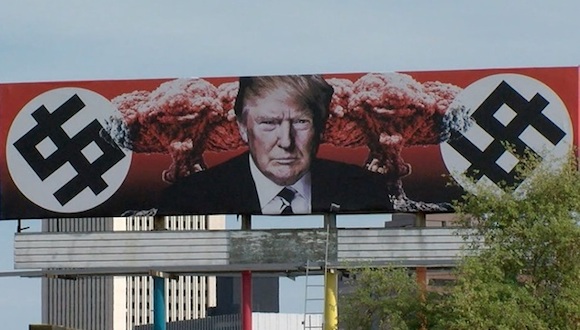 Last week, we reported on the confluence of art and advertising in terms of artist-deigned billboards. California-based artist Karen Fiorito falls into this tradition with her recent billboard artwork ridiculing President Donald Trump. The piece, which is on view in Phoenix, Arizona, depicts Trump’s face flanked by laughing clown-shaped mushroom clouds and dollar signs resembling Swastikas. On his jacket, the president wears a Russian flag lapel pin. La Melgosa, the boutique and gallery space that owns the billboard, had previously commissioned other artists to create works for the sign.

This is not the first time billboards have been used to target Trump. Back in November, a billboard in Russia depicted Trump alongside Vladimir Putin with the phrase “Let’s make the world great again — together!” In Detroit, the Nuisance Committee, an anti-Trump political action committee, commissioned a billboard that took aim at Trump’s anti-Islamic remarks.

Since the billboard in Phoenix went up, Fiorito says that she has received death threats. But still, she stands by her message. She told the Washington Post:

In that spirit, here is the other side of the billboard: “unity” spelled out in sign language.