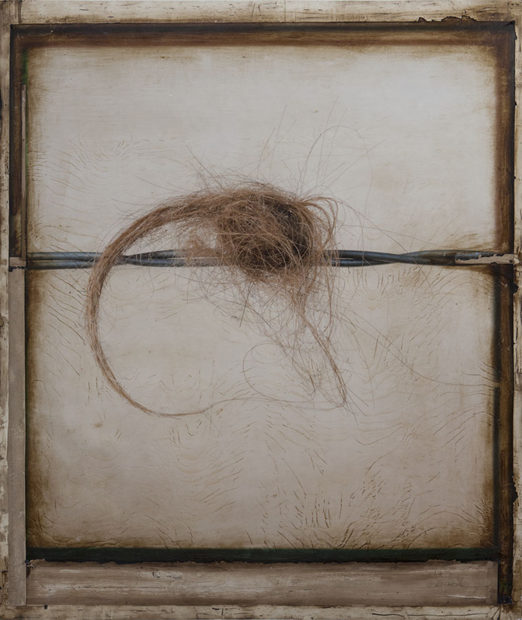 A still-life theme shapes concurrent exhibitions at two Fort Worth galleries: William Campbell Contemporary Art and Artspace111. The tradition of still-life painting still holds sway for many artists as a way of demonstrating their mastery of observation and reproduction of objects, usually through some version of realism.

Of the two venues, the most unusual still-life works are at the Campbell gallery, where Kris Cox’s solo show is nearing the end of its run on March 18. Cox’s mixed-media works primarily depict—at greatly enlarged scale—tufts of cattle hair that have been caught between strands of barbed wire fencing on a nearby ranch. As the animals rub repeatedly against the wire, the hair is rolled into ball-like forms. Other images in the show include dried dahlias and mechanical equipment, but the cattle hair is the most compelling visually. The works are macro digital photo prints on Innova cotton rag paper coated with beeswax; the waxy matte surface contains multi-directional marks from the artist’s rubbing, and the paper itself arches away from the wall. The works are unframed, but a frame of sorts is created by the artist as he paints around the perimeter, then adds a layer of pigmented wood putty that looks like cracking paint on a window frame. Asphalt emulsion wiped over the entire surface darkens cracks and makes the pieces look aged.  Highland Icon 5143 and Dahlia Icon 6243 are good examples of the work in Cox’s show. 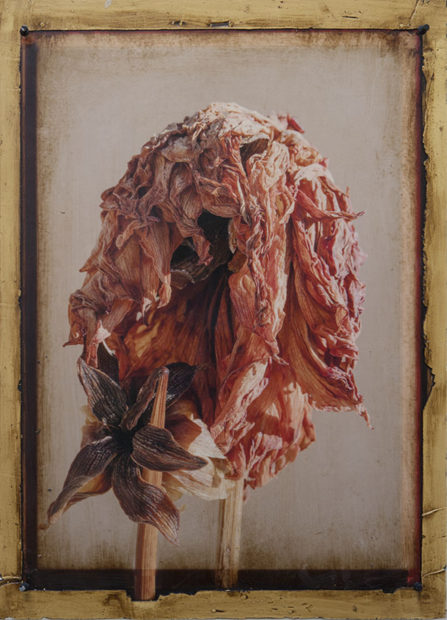 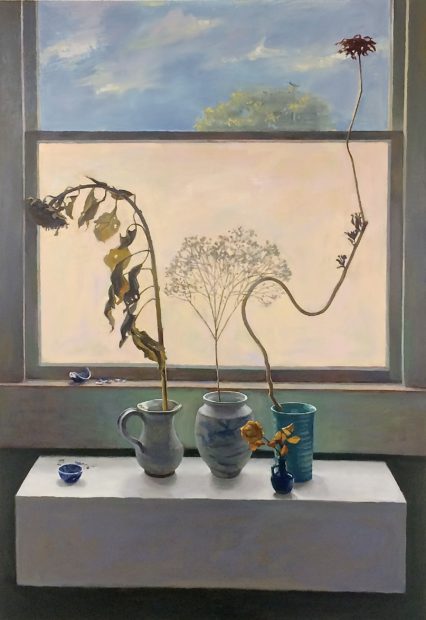 In this group of artists, Carol Ivey is most at home with this particular group-show assignment. She demonstrates her mastery of the still-life form in the oil-on-canvas Gathered and Arranged. The complex arrangement of multiple vases and dried plants is placed in front of her studio window, and natural light floods in, backlighting the arrangement and suffusing the objects with soft light. 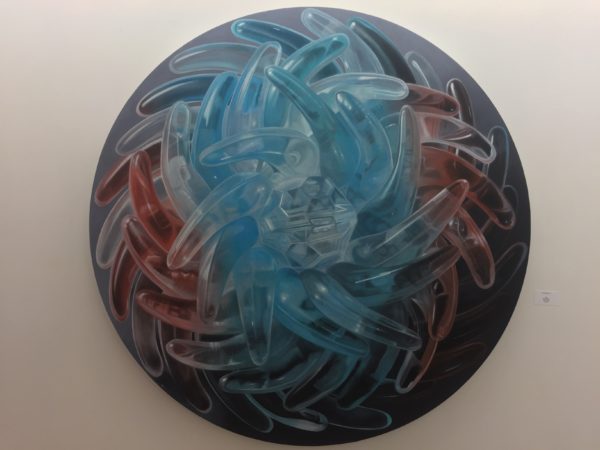 Ann Ekstrom is also well-aquainted with the still-life theme, and her Nest oil-on-canvas painting is a show stopper, both in its size as a five-foot wide tondo and with its profusion of circling, layered translucent forms. 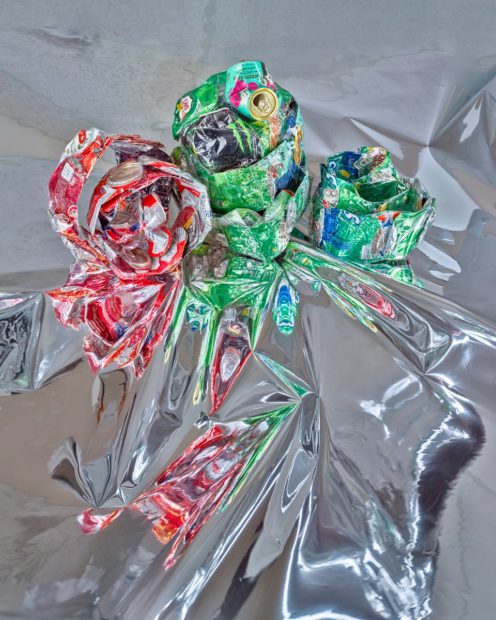 Marilyn Waligore was the top prize winner selected by Eric M. Lee, the Director of the Kimbell Art Museum, at Artspace111’s Third Annual Regional Juried Exhibition. Her two photographs here demonstrate the same complexity of color and reflective surfaces that won her that prize. 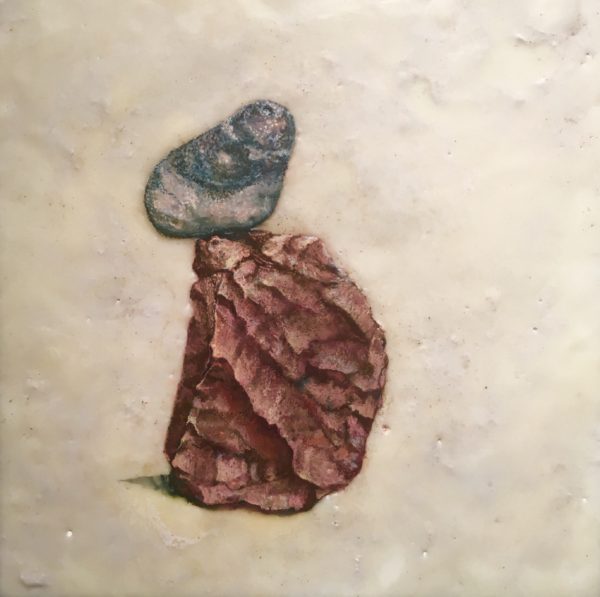 Janet Chaffee continues her series of thickly poured encaustic panel paintings that are colored with dry pigments. Reenchantment of The World #2 departs from abstraction to focus in on a fractured rock form that is painted directly onto the encaustic background. 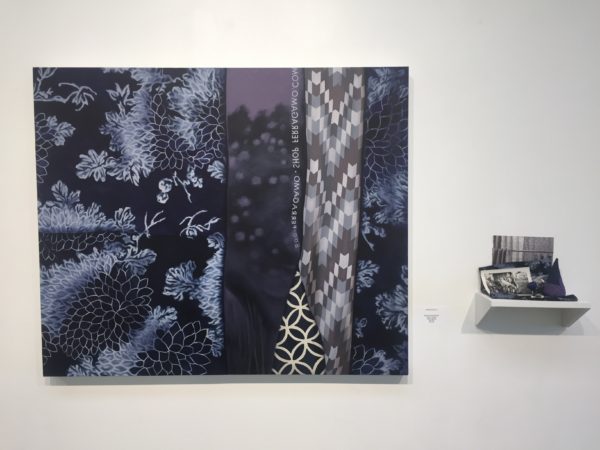 Devon Nowlin pairs her trompe l’oeil painting technique on stretched canvas with a tiny sculptural installation on a small shelf to the side that contains sewn fabric objects corresponding to her painted image, in addition to photographs and other items. The painting juxtaposes deep blue/purple fabrics of many patterns, and the photographs in the pendant sculptural installation give it a nostalgic tinge, and also exposes the artificiality of a traditional posed still-life arrangement. 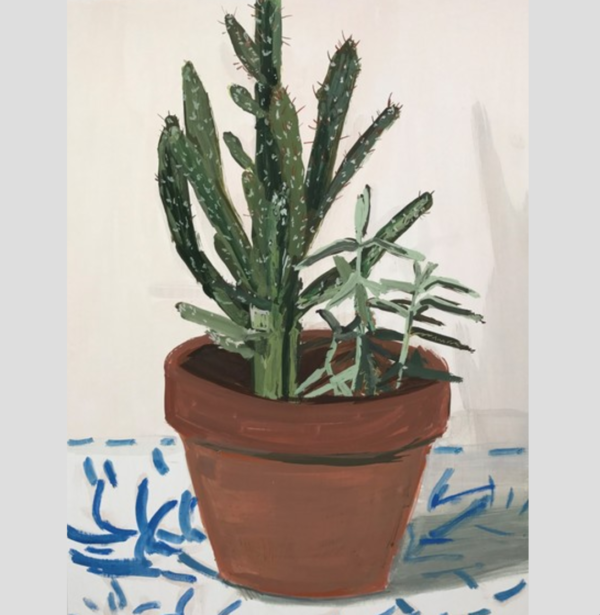 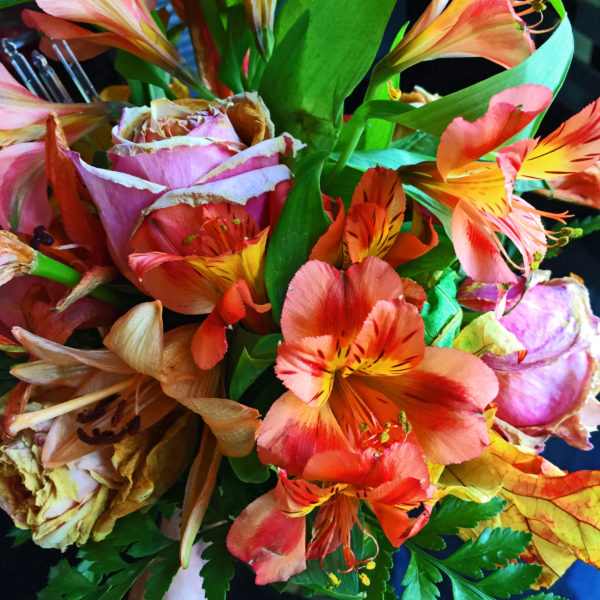 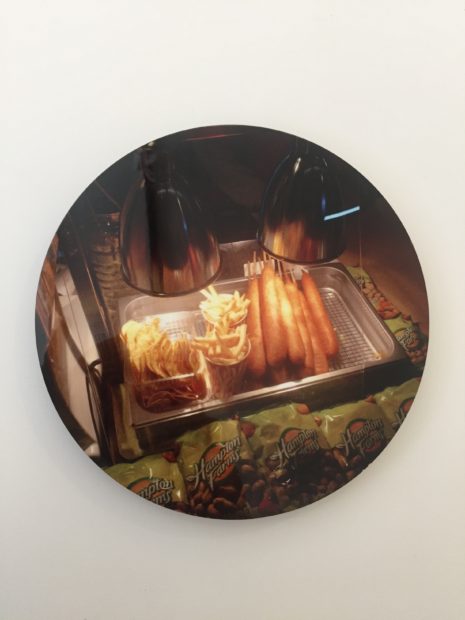 Nancy Lamb’s CORNY DOGSSSSS is a tiny 8-inch tondo mounted on a round metal backing. It riffs on the theme of food often used in still-life arrangements using one of the food staples of the Texas State Fair. 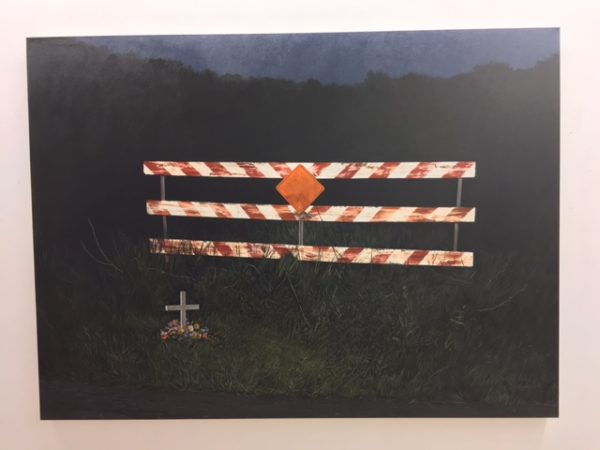 Daniel Blagg brings up the rear, so to speak, with his 59 x 80-inch painting Dead End, which is surely not intended as a commentary on the show theme itself.  But his work readily falls into the vanitas aspect of the still-life theme, as it reminds the viewer of the brevity of life—the makeshift cross in the lower left marks the untimely death of someone who didn’t heed the road-closure barricade. Omnia mors aequat (Death makes all equal).