This Saturday, October 12, is the last chance to catch the recently returned paintings of Fort Worth artist Nancy Lamb, from the Smithsonian’s Rockwell Museum in upstate New York. Fort Worth’s ArtSpace111 exhibition of the works, in its newly expanded Great Gallery, is part of Lamb’s Refired Pow! show. 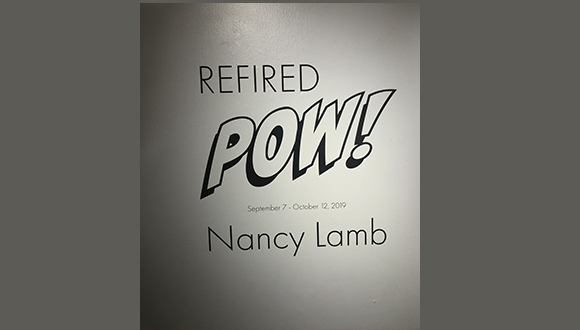 The Rockwell show was a select retrospective of 15 of  Lamb’s social and party paintings, borrowed from collectors, and the paintings are as universally Texas as they are uniquely Lamb’s. The artist’s subjects range from museum directors to total strangers, from friends of friends to family members. 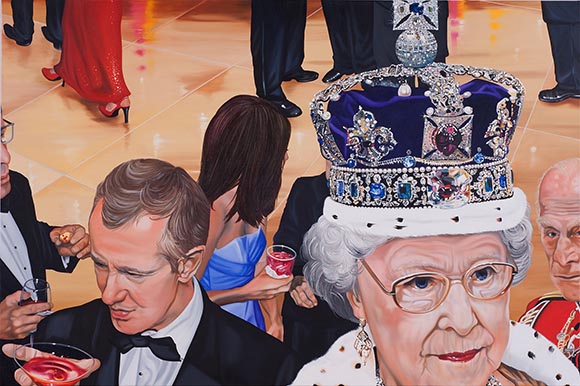 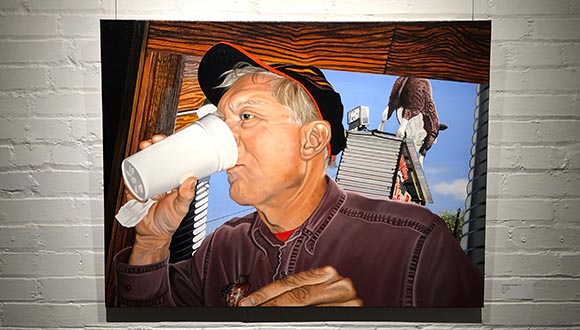 Nancy Lamb, Too Heavy On The Sauce. This is a Portrait of Bob Powell, the artist’s late husband.

Lamb’s paintings shine a hard light on the circles she finds herself in, yet without a single trace of snark, malice, or indictment. 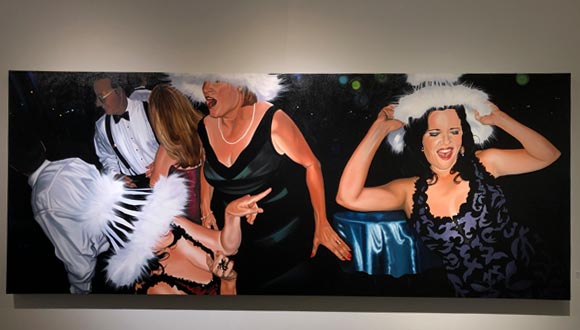 Lamb is the constant observer, reflecting back what she sees and rewarding us with etched grooves in faces that tell stories, all embellished with ornate clothing, jewelry, and human action and interaction. 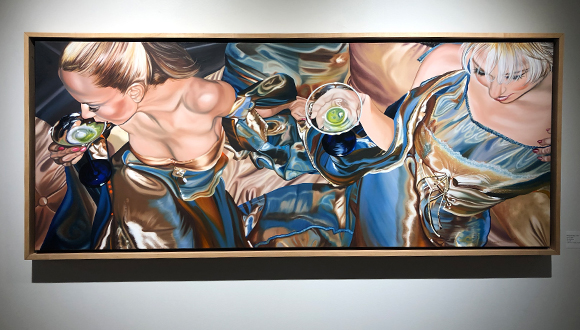 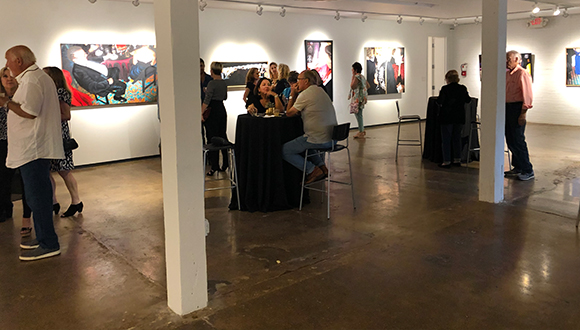 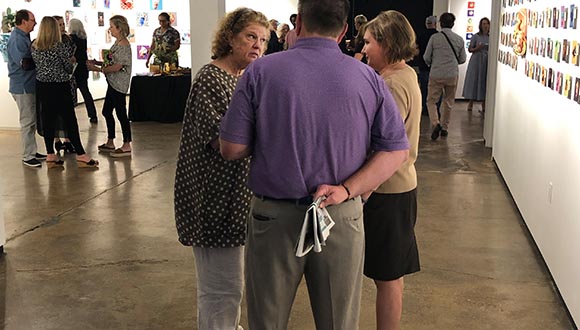 Nonetheless, Lamb reflects discernment and restraint when it comes to to the images from these soirées that she turns into paintings. 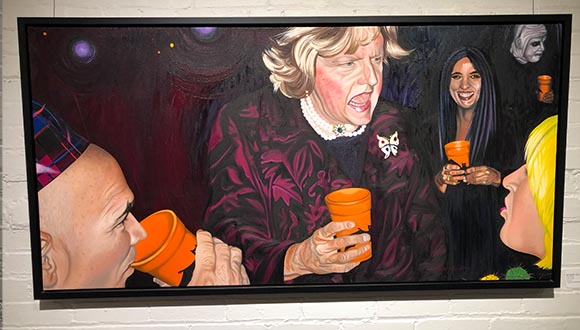 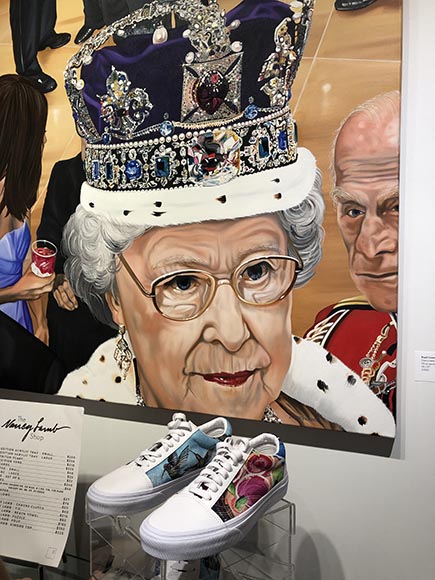 The artist paints from photographs taken at the many social events and art parties that she’s frequented since the 1980s, and from more personal photographs she’s created from catching people off-guard. 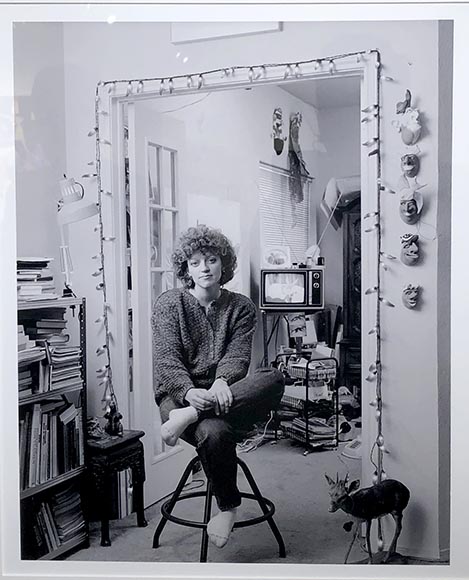 Portrait of the artist as a young woman.

Lamb is a Fort Worth icon, and I would imagine her collection of photos and memory cards tell an important story about Fort Worth through the artist’s eyes. 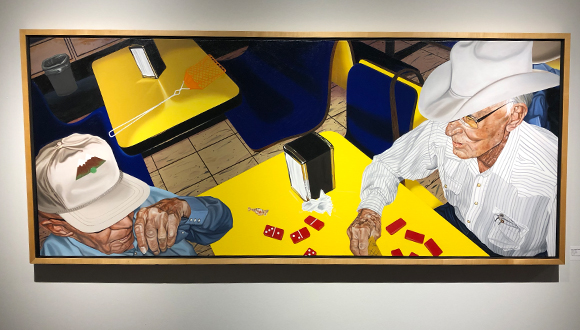 Lamb’s subjects, painted from a paparazzi-like perspective, are brightly lit in flash lighting. While they reveal much in one sense, they’re also brimming with mystery and untold stories. Some of the untold story/mystery in one painting, though, Dairy Queen and Dominos (2001), is revealed through the words of Lamb in a text message to Glasstire:

“Bob and I were driving to Colorado and we stopped in Claude, Texas at a Stop and Go. I went in for a bit and as I was coming out I see these two old gentleman that I wanted to take a photograph of; I go out to the car and I’m really nervous about it, my heart is pounding because it’s sort of the first time that I’ve taken pictures of strangers, but I go back in anyway and take photographs. Problem is is that I don’t get their names and I don’t tell them my name.

It takes me about two years to do the painting, and about a year after that a woman from Dallas calls me and asked me where I got the image. I tell her and she says that’s my uncle John, John Goodin.

It turns out that they filmed the movie HUD with Paul Newman in Claude, Texas. John Goodin happened to be in the first scene with the first line in the movie, and his whole life he got residuals for that movie and was kind of famous in Claude. Sadly his niece told me that he had just died… but she also told me the day I took photos of him he had gone home and told his wife that someone had taken his photo.

He and his friend in the painting practically owned all of Claude and they had gone to high school together and Bob and I became friends with his widow, and visited every time we went to Colorado. I added the Dairy Queen interior complete with flyswatter, and have them playing dominos like you’d think they would.” 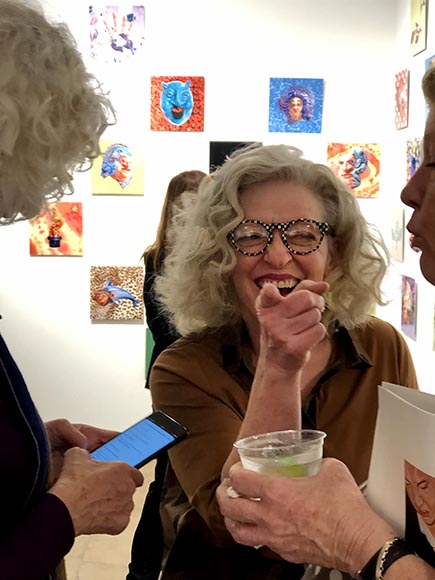 This and That: Stella Alesi and Henri Matisse