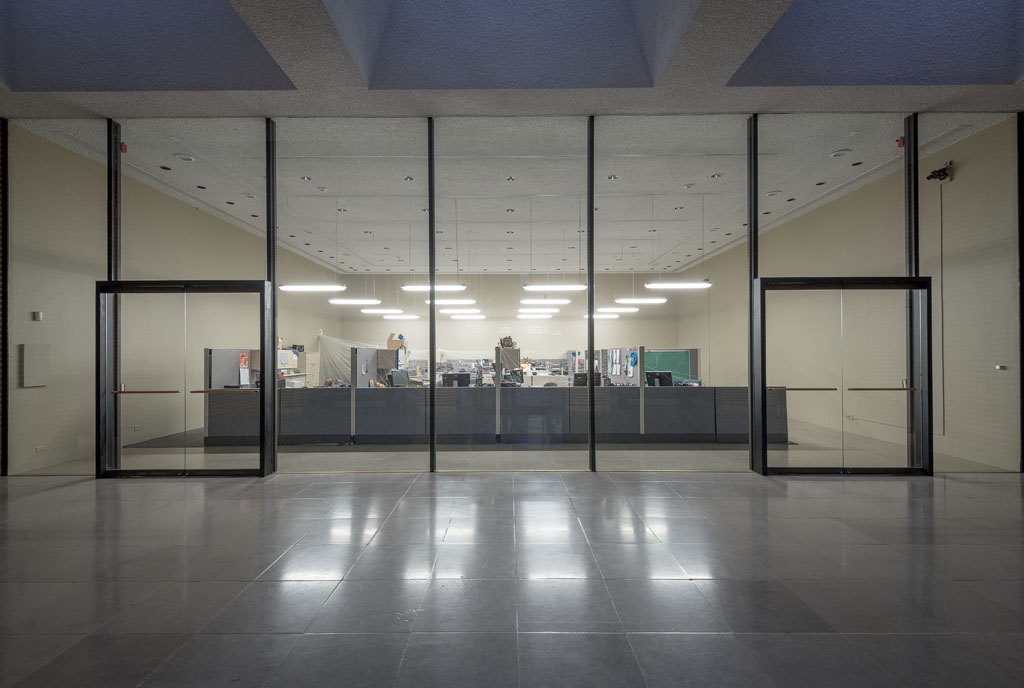 I am partial to installations of kinetic processes. Roxy Paine’s Second Nature exhibit at the CAMH in 2003 made a major impression on me as something eerily impersonal yet chaotic, with Paine’s art machines belching paint and molten plastic in a disquieting automated rage. 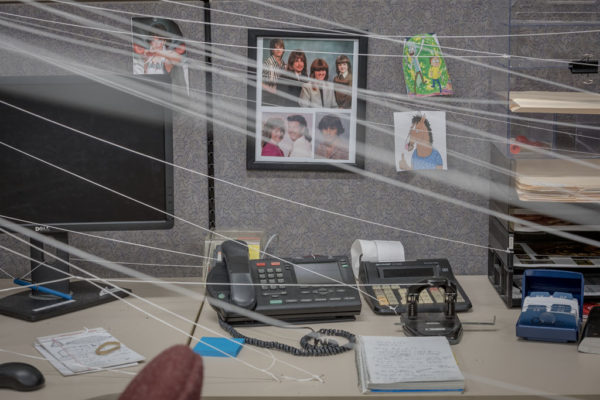 Jonathan’s Schipper’s excellent installation at Rice Gallery deals in glacial entropy, but it shares a spark with Paine’s exhibit—an exhilarating queasiness that comes from, well, processing something. Here Schipper has installed a crushingly accurate multi-cubicle workspace, seemingly placed in a tremendously bleak hologram of the late 1990s. The awful, bulbous designs of Microsoft’s “golden era,” zip drives and Dell desktops, lie sickly on surfaces of slick particle board. Faded family photos and generic ribbons and diplomas of achievement crookedly hang on the walls. All the furniture is of course extremely drab. But Schipper wisely does not lay on the despair too thick; there’s nothing mocking or mean-spirited about his tableau. It simply is unromantically and brutally real. 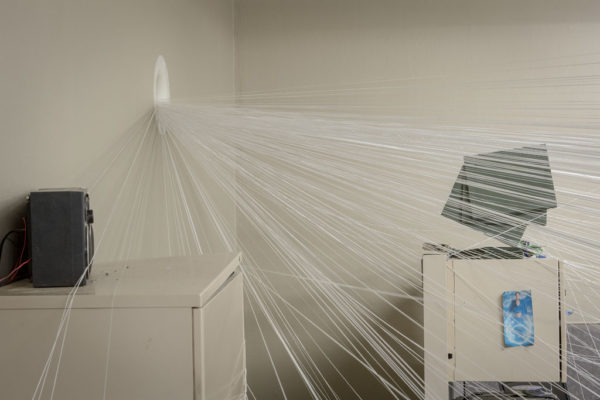 But in the corner of the room, a perfect white portal—like an ocean liner window—sits placidly. Coming out of the portal are thousands of white lines that attach to all the objects in the office—photos, copiers, computers, chairs, everything. Behind the portal, a 45-ton winch slowly and imperceptibly pulls the strings (the winch moves at approximately one millimeter per minute), and by extension all that they are pinned to, towards itself, in the process destroying the office and by the show’s end leaving it a total ruin. In the adjacent room, a time-lapse video displays the to-date carnage on loop. 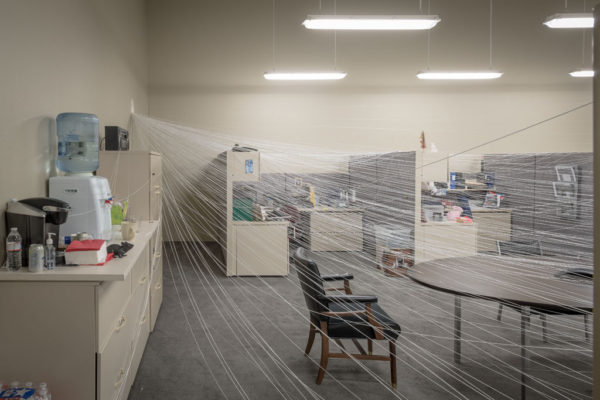 Side by side, the two symbiotic pieces—the time-lapse video and the installation—create disparate experiences and a fascinating hinge for the show. The video is cathartic, recalling the brilliant installation and video by the Danish collective Superflex, Flooded McDonald’s, where a McDonald’s is painstakingly recreated and then slowly flooded into a joyous, apocalyptic bedlam. There’s something surreal and righteous in the wreckage, as if a trickster god of taste and pizzazz appeared to mete out punishment on homogenized dreariness. 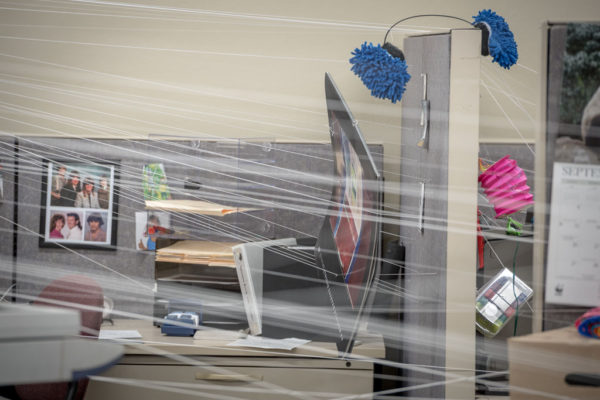 The installation creates a different reaction. The silence of the cubicle hangs on an inexorable dread that is deeply disquieting. The portal, especially after viewing the time-lapse, becomes a malevolent, nihilistic abyss, akin to the filmic voids (with encompassing soundtrack drones) in movies like Eraserhead and Irreversible. The white lines ignite a lattice of patterns and references in the mind. There are thoughts of death and the destruction of the environment, of surveillance, of the brutal enmeshing of late-stage internet connectivity—full transparency, zero privacy, endless performance.

Schipper states: “The most static object is still in motion at a molecular level and the world is always changing. Even if the object was this perfect thing that stayed the same, we as a society change how we view it. My installations are about destruction and creation, and they generally have no static point. It is the process of changing them that is the point.” 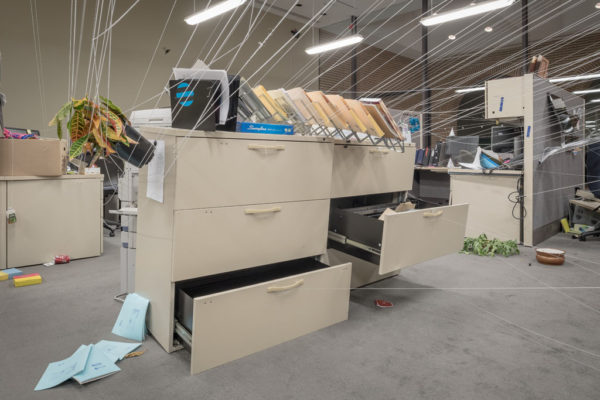 By splitting the show into the installation and the time-lapse, Schipper articulates this concept fluidly and profoundly. The show contains multitudes: stasis, anticipation, movement and memory. From this pinnacle of banality—the office cubicle—Schipper forges a distillation of time and change, allowing viewers to step outside of themselves and witness. Given the tenor of 2016, there’s something elementally horrifying and resonant about this experience.

See it before it closes!: Yasuaki Onishi at...

I saw this show and thought of my dad and how he has worked at an office just like this with the same company for 30 years. I showed him pictures. He can relate, but is ambivalent. He says it’s like destroying his natural habitat. Like the rain forest for office nerds. He’s adapted to the A/C and thin carpet and the stiff posture of sitting at a desk; this sort of space suits him. This room does not suit me, except it’s still a gallery so it does. To see an art space dressed up like an office is a funny oppositional pairing. The people who work in each are thought of as opposite personality types. Compliant vs free spirit.

It still feels like a gallery with tall ceilings and open air space. I want to see it with the drop down ceiling tiles – sagging with water stains from the dripping air conditioner. And the lights should flicker with that god awful buzzing from a worn out ballast*. I want to see dirty mouse pads caked with grime from years of shedding skin and spilled coffee.

It’s still very much a gallery because of the voyeuristic theatrical thing of not being allowed inside of it. We aren’t supposed to walk on the carpet, that’s the stage, but we can walk around it and look in at the desks. And in this slow production we are watching part of our culture destroyed. It’s not a part we choose to elevate or recognize on national holidays, but we know this space. We visited our parents there at Bring Your Kids to Work Day. More recently, we’ve come to understand the pent up frustration of work first hand. So the ruin porn draws us in..

The fascination of seeing our universe in an alternate state.

Why is it interesting to watch something break? Violent destruction is something we’ve seen so many times in action movies it’s become tedious. They’re having to come up with bigger and weirder ways to make things go boom. Like spoiled kids, we are used to being given what we want in that department. But we’re used to seeing it on a screen and we’re used to it happening fast. This is the slow crunching, teetering on the brink. It’s the tension, not the breaking that we want.

Even if the motor didn’t pull the room in, it would still be destroyed. The plants would die, the food would mold, animals would gnaw through the fabric of the chairs, and dust would cover it all. Because, not only is it collapsing, it’s devoid of people. The workers it holds are also responsible for maintenance. If the show could last forever it would be this never ending battle between infrastructure and natural decay over time. Although Schipper’s collapse is relatively slow, it’s still man-made destruction. It’s destruction as unnatural as the cubicle space is to begin with.

*anyone suffering from a buzzing ballast needs to replace them. It is easier than you think and will save your life.