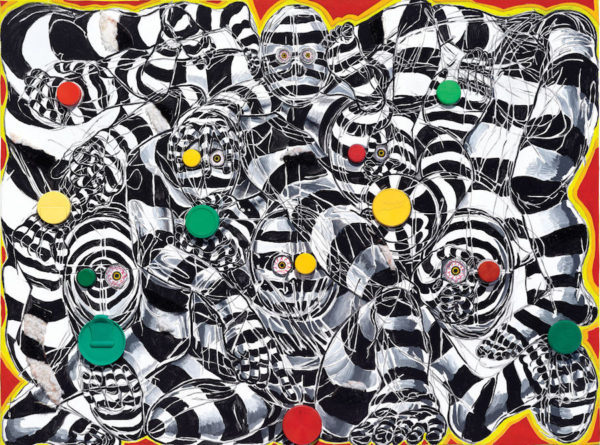 Houston viewers can gird their loins and prepare for their eyeballs to pop when they step into a corner of Trenton Doyle Hancock’s ongoing history of the universe. (The show is on view at the former Rice University Art Gallery, which stepped in to host after Art League Houston, which organized it, was damaged in Hurricane Harvey.) In Mind of the Mound, an exhibition of prints, drawings, paintings and sculpture mounted in conjunction with Hancock’s celebration as the Art League’s 2017 Artist of the Year, viewers can catch a glimpse of that rare artist who presumes to weave together all of human history, all art history and all the great mythologies that have powered the human domination of the planet into one epic adventure.

Hancock is a Hobbesian artist. If Jean-Jacques Rousseau tells us that man “is born free but is everywhere in chains,” Hancock’s universe beautifully contradicts Rousseau and shows us that man is born bound up in the chains of his own inherent violence and stupidity. For Rousseau, the struggle for human freedom pits the individual against an external world that robs him of freedom. For Hancock, the struggle for human freedom pits man not against external oppression but against himself — against his own evil. In Hancock’s hallucinogenic cartoon world, it’s not at all clear that the arc of history bends toward justice. 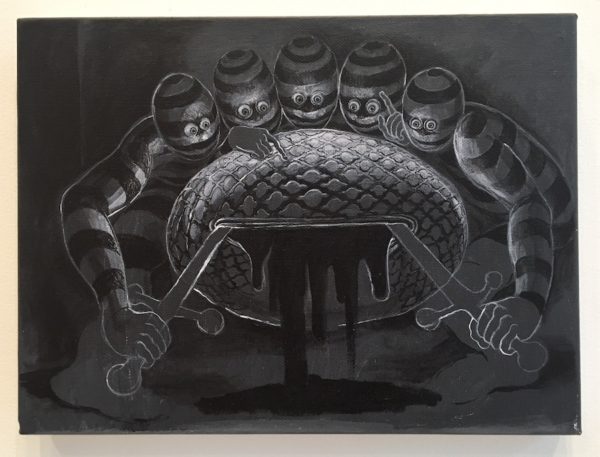 But if Hancock tells us we’re doomed to imperfection and injustice, he does so with relish and sense of humor that forces us to laugh at and even revel in our pitiful fate. It’s his acceptance of the Hobbesian outlook which tells us that the human state of nature is “nasty, brutish and short,” wrapped up in a package of formal chops and visual joy that gives Hancock’s work its undeniable power. The goal of art is not to eliminate pain but to transmute it into beauty — to find the joy in the suffering. Even as he plunges us into a universe of suffocation and liquidation, Hancock rewards us with an infinite array of color, dense pattern and the visual language of late Medieval and early Renaissance painting extruded through a Roger Rabbit meat grinder. 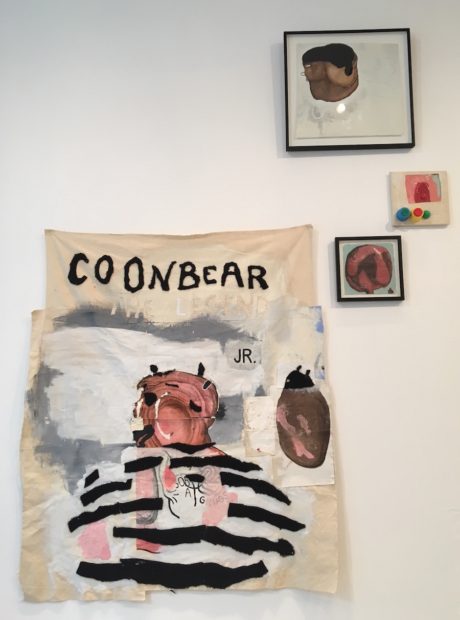 There are precious few artists who attempt to create the kind of ambitious mythological gospel that Hancock has been writing for the last twenty years. So what is it that allows him, and a very few others, to weave an entire universe around the center of their own autobiography? To do so is, after all, a wildly egoistic undertaking in this chaste age of shame and humility.

Isolation helps. A feeling of deep loneliness that allows an artist to hover over the world and see it for what it is. Hancock, like all of the best artists, has survived the apocalypse and knows that the revolution is not coming — it’s always already here. The racism, the changing climate the violent insurgencies — they’re all real and they’re always happening. The plots and conspiracies dreamed up by Hancock’s many characters reflect the history of fallen civilizations and the chicanery of great and cruel empires. It’s an American (and Texan) retelling of the Bible in all its bloody contradiction. 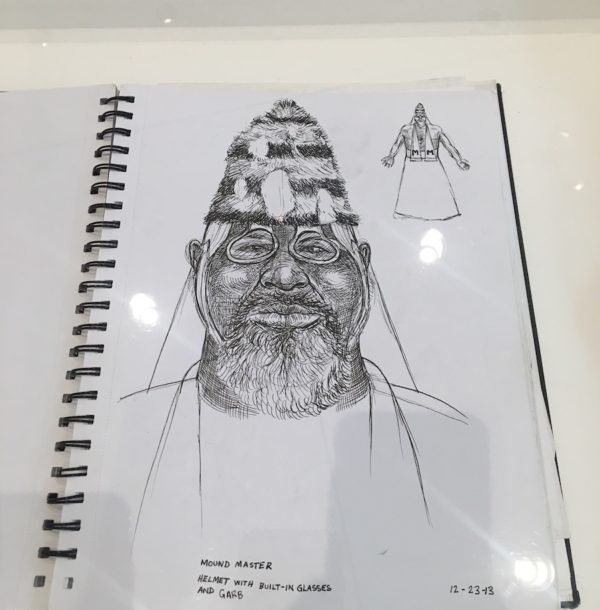 For a long time artists have looked to the world of popular capitalist entertainment for aesthetic pleasure and moral guidance. Hancock understands that the old monotheistic religions no longer speak to the 21st century. But the disquieting human truths embodied in those religions (and those before them) remains unchanged. The contemporary spirit of art may come from comic books and television and cartoons and popular music and movies, but it still remains for the individual artist to weave these strands together, and, as Edward Gibbon writes in The Decline and Fall of the Roman Empire, to “…illustrate his age and country by the efforts of a single mind.” Few artists figure out how to successfully tie their popular (and often childhood) inspirations back into the long history of art and religion to create an authentic style.

The central hero (and villain) in every Trenton Doyle Hancock project is Trenton Doyle Hancock, the Artist. This is dangerous territory for any artist, and a pretty high achievement when they manage to pull it off. What allows an artist to presume that his single experience of reality is universal — that his grief and joy and horror are so universal that he can assume the heroic mantle? Most artists don’t try, and many who do fail, showing their weakness and their ass when they fall.

So does Hancock triumph? Well, a hero is only as good as his last battle, and an artist is only as good as his last show. Hancock is holding on for now, riding his color-saturated whirlwind to great effect. But the snake is always hiding in the garden — whispering, tempting, seducing. When an artist is as strong as Hancock is and has been, the stakes are always high, and there’s a long way to fall.

Trenton Doyle Hancock’s ‘Mind of the Mound’ is at  Rice University Art Gallery through November 17th, 2017.