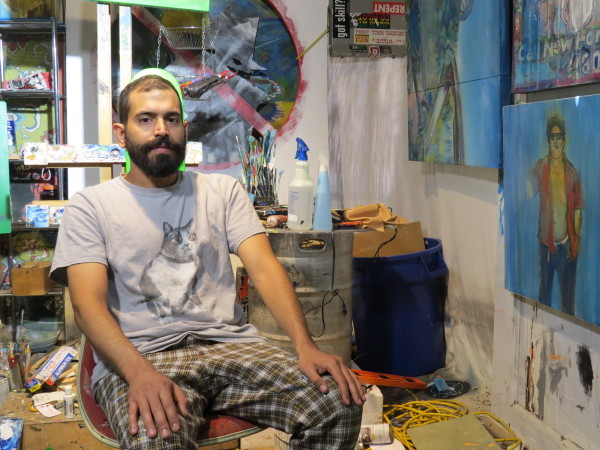 Although Ed Saavedra often bills himself as the “senior creative co-conspirator” (i.e. co-director) of San Antonio’s long running Fl!ght Gallery, he has been exhibiting his own work since 2002. Saavedra has steadily focused on problems surrounding the divide between authority figures and the marginalized or underprivileged. His latest efforts, which are on view until September 3rd at Gravelmouth in Southtown The Arts District, include a number of text-based works highlighting examples of aggressive acts by police officers.

As a person of color, Saavedra (who is of Mexican-American and Columbian heritage and was raised on the outskirts of San Antonio) has himself been racially targeted by police officers on numerous occasions. The earliest incident occurred when he was a young child hanging with some friends in a non-school environment and, for no apparent reason, was instructed by an officer to empty his pockets. As an adult, he has had to repeat this scenario often, with the worst experience being when a policeman forced him to lie face down on the ground, and then stomped on the back of his head. 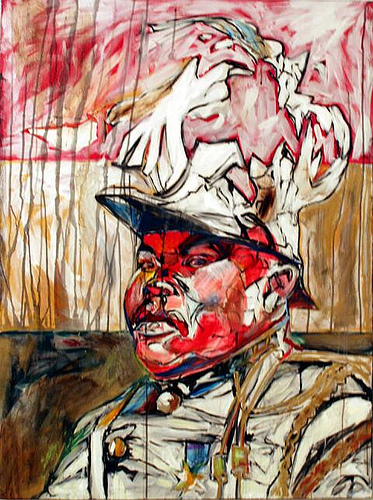 So it’s not a surprise that as an artist Saavedra was attracted early on to painting memorial portraits of subjects who transcended their otherness to become cultural heroes, such as the Black Nationalist leader Marcus Garvey, and Harvey Milk, the first openly gay member of the San Francisco Board of Supervisors. A celebrated figure in the lyrics of reggae, Garvey was an early civil rights champion in America, and the founder of the Universal Negro Improvement Association. He promoted resettlement in Africa, but was eventually deported to Jamaica after being convicted of mail fraud. Based on an archival photograph, Saavedra’s portrait Garvey’s Ghost (2005) depicts Garvey in the celebratory regalia he wore in a parade through Harlem in 1922. Through forceful, agitated brushwork, Saavedra animates the composition to express the air of pride and determination that undoubtedly motivated a historical forerunner of today’s Black Lives Matter movement. 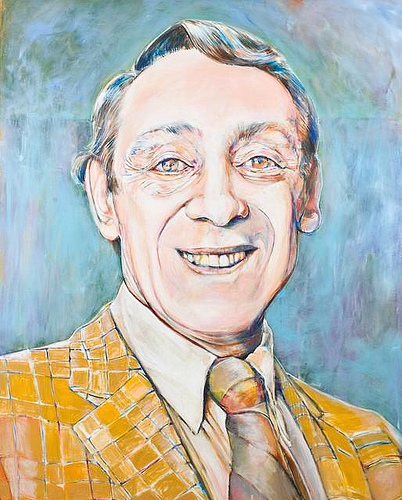 Saavedra’s portrait of Harvey Milk was inspired by the 1984 film documentary The Times of Harvey Milk. Born a year after Milk was assassinated, Saavedra became intrigued by Milk’s role in what is now called the LGBTQIA movement and wanted to honor him with a portrait.  Basing the image on a black-and-white photo, Saavedra took artistic license and colored the supervisor’s suit yellow and drew focus on Milk’s knowing eyes—visual reminders that Milk was known for being a genuinely warm and kind human being. 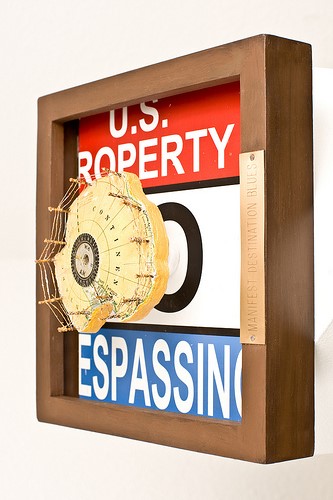 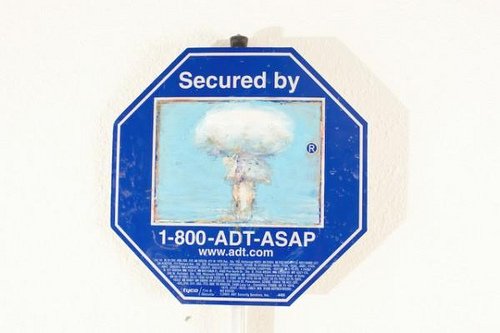 As a counterpoint to his portraits of individuals who fought for human rights, Saavedra has made a number of found-object sculptures that question the role of authoritarian structures in society, with an emphasis on Texas. In 2009, he repurposed abandoned security signs to muse satirically about the ongoing debates surrounding barriers along the U.S./Mexico border. For Manifest Destination Blues, Saavedra attached a cut-out section of a globe to a found NO TRESPASSING sign. To call attention to what he considers the ludicrousness of walling off countries, he used nails and a guitar string to fence in the zero-population continent of Antarctica. Visual irony is also at play in Saavedra’s Secured By (Cloud), where he painted a mushroom cloud on the face of a found ADT security sign, something that becomes useless and inconsequential in the event of a nuclear explosion. 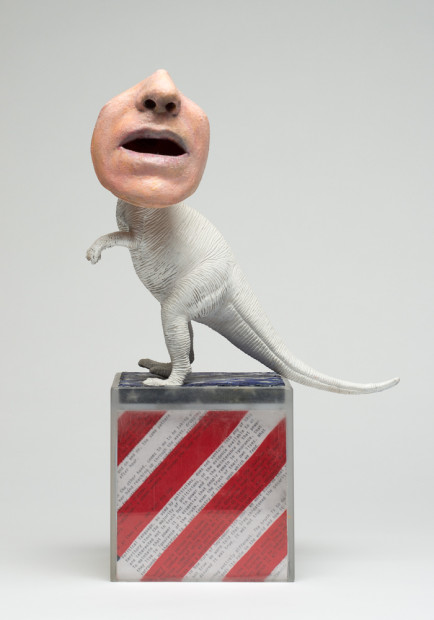 In another assemblage, Appetite for Extinction (2012), Saavedra takes aim at politicians who are out of touch with contemporary life, sniff out victims for attack, talk a big game, and lack vision. To articulate these ideas, which derive from playwright Harold Pinter’s 2005 Nobel Prize acceptance speech about the dishonesty of politicians, Saavedra constructed a figure with the body of a dinosaur and a mask-like face featuring only a large nose and an open mouth. For a pedestal, he built a cube that can be switched on to illuminate from within. Adorned with stars and stripes motifs, text from Pinter’s speech, and a photo of an explosion, it presents a dystopian perspective on America that is uncannily precursory of the view being propagated by the current Republican presidential nominee. 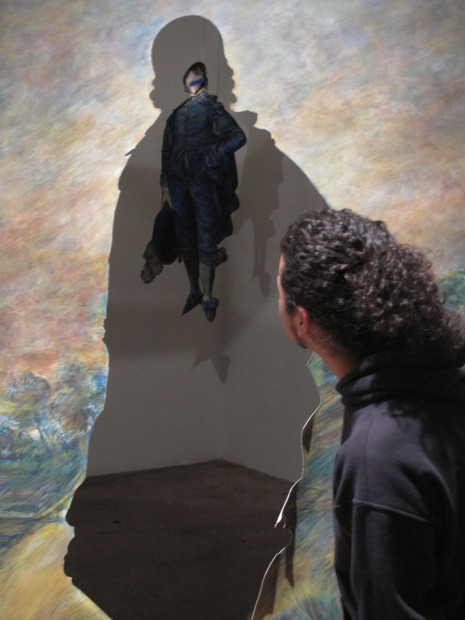 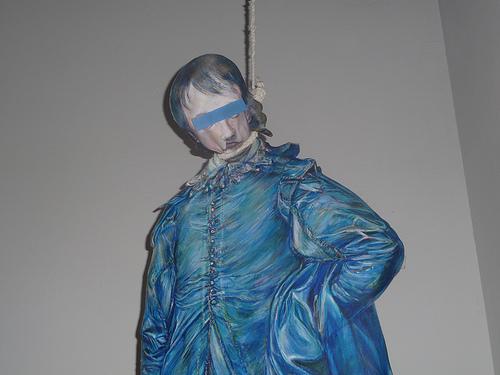 Requiem for an English Major (detail)

Having had his own confrontations with police officers, Saavedra has become passionately concerned about the treatment of inmates in the Bexar County Jail, where there have been an alarming number of suicides among prisoners there, with four such incidents occurring just last month. But the first of the jailhouse suicides to capture Saavedra’s attention was that of Harlen McVea, who hanged himself with a bed sheet in 2009, after scrawling a suicide note with mustard squeezed from a packet. In response, Saavedra created Requiem for an English Major, an installation exhibited at Blue Star Contemporary in 2011. Consisting of two parts, the installation included Excuse Me While I Disappear (2010), the artist’s painted replication of Thomas Gainsborough’s The Blue Boy (1770) with the figure cut out, and 15 Minutes After Lights Out (Bexar County Jail) (2011), the cutout figure mounted on Plexiglas with blue painter’s tape over his eyes and suspended from a bed sheet. As visitors approached the work from a distance, only the opening in the painting was visible at first. At closer range, one could see the hanging figure staged and spotlit in the distant corner like a media spectacle. 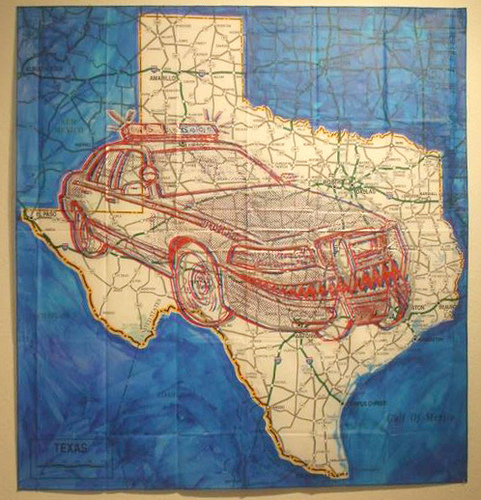 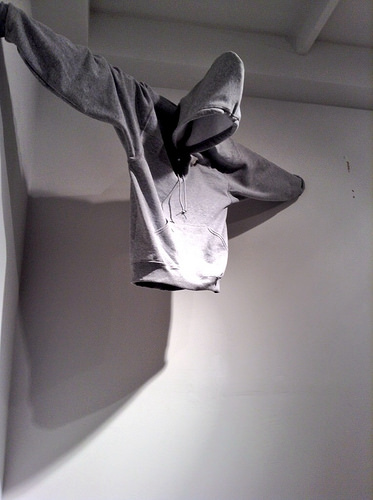 Don’t Leave Nothing in Your Clothes, 2014, mixed media, dimensions variable (from “They said we looked suspicious…,” a collaborative project with Justin Parr)

Over the past few years, Saavedra has frequently addressed the topic of police brutality. In Lone Star Rebus (Police State) (2013), he introduced a recurring motif of a shark-toothed police car, which in this instance is shown superimposed over a screen-printed map of Texas.  With the car almost as large as the state itself, viewers are encouraged to think about the enormity of police presence and the ubiquity of police cars in Texas. More solemn in temperament is the mixed-media work Don’t Leave Nothing in Your Clothes (2014), a hoodie suspended like a crucified Christ that serves as a poignant commentary about feelings of defenselessness that are regularly experienced by the targeted victims of police harassment.

For the current exhibition at Gravelmouth, Saavedra has planted his messages of alarm on a number of small drink coasters, replacing the usual beer logos with emblematic images such as the hungry police-car teeth or snippets of text lifted from newspaper articles about the arrests of people of color. If actually used as coasters, these artworks could convey political commentary in an inconspicuously subversive manner. 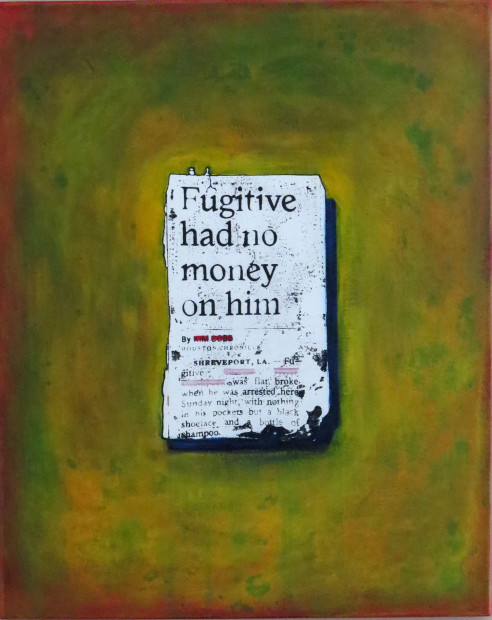 Here Saavedra has also included some stirring new paintings in which news clippings resemble tombstones floating against abstract backgrounds. Especially moving is Shoestring Budget (2016), where the background recalls Mark Rothko’s luminous color fields and, as in many of Rothko’s paintings, evokes grief.