Born in San Antonio in 1983, Albert Alvarez grew up in the city’s Southside barrio. The neighborhood he lived in was marked by poverty and crime, and his own family was not unaffected. In Alvarez’s 2007 self-portrait, I am Albert’s Hard Times, the artist documented his early years, and included an image of his uncle on his deathbed, dying from a heroin overdose. Appropriating the pictorial style of the self-taught artist Joe Coleman, one of his heroes, Alvarez told his own story. In the center of the painting, Alvarez depicted himself with the long hair he sported at the time looking somewhat like Albrecht Dürer, also one of his major influences. 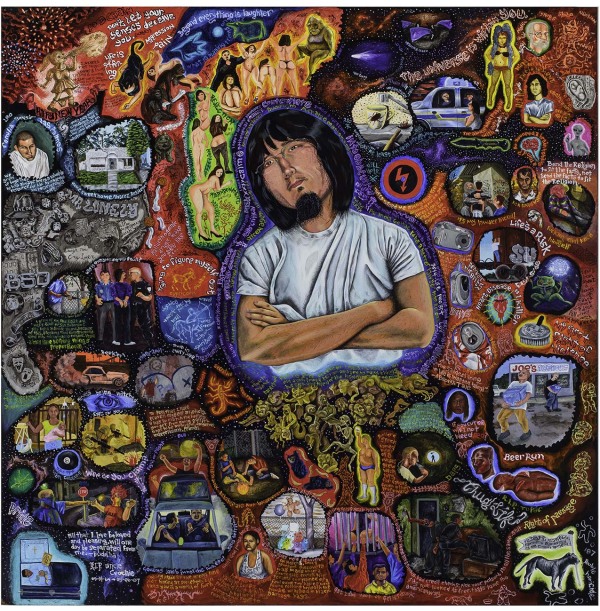 Surrounding his self-image are scores of tiny vignettes, including the heroin scene, various views of street violence, police arrests, and strippers, interspersed with references to daily life, such as his family’s house, a cell phone, and a roaming black cat. The painting, which is in the collection of the San Antonio Museum of Art, is overloaded with imagery, more, in fact, than can be absorbed in one or even multiple viewings. During the years that I worked at SAMA, I marveled so many times as I witnessed Latino high school students with eyes glued to this work. For many of them, it is their story too. And it is brutally honest. 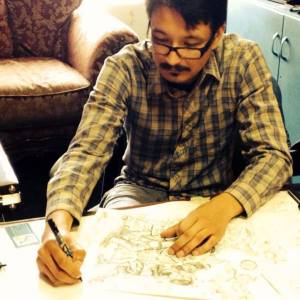 San Antonio is fortunate to have a distinguished history of support for talented Latino high school students. Alvarez, along with Ruth Buentello, Jimmy James Canales, Eddie Chavez, Emette Rivera, and Ashley Sanchez, were all mentored by Donna Simon, who taught for many years at Brackenridge High School, in addition to giving private lessons. Simon was also a founding board member of Say Si, an afterschool arts education program for youth. Alvarez attended Say Si, and the results earned him a four-year scholarship to the Rhode Island School of Design, where he concentrated on digital animation. 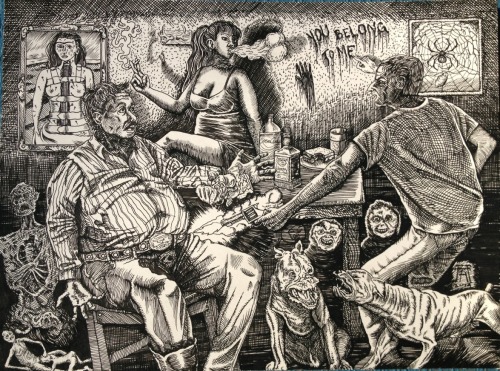 When I first became aware of Alvarez in 2006, he had just returned to San Antonio from RISD, and he was making the rounds of art openings with sketchbook in hand. For he is always drawing, and he does so loosely in the style of Dürer and often while riding the bus. Earlier this year, a retrospective of Alvarez’s obsessive and intricately detailed drawings was held at Bihl Haus Arts in San Antonio. In the exhibited works, viewers could see Alvarez musing on a variety of topics, including alcoholism, boredom, sex, religion, and war. Although small in scale, the drawings were successfully animated through their crisp execution and provocative subject matter. As the artist is constantly producing new drawings, the dialogues unleashed in this exhibition continue to evolve and expand, and can be found in progress or completed on the Facebook page of the artist’s alter ego, Albrechto Alvarez, and also on his blog. In perusing the latter, I came across a recent drawing entitled Life on the Edge. Meticulously rendered in the artist’s characteristic manner, the drawing depicts a disturbing narrative about twisted relationships and domestic violence, with the focal point being castration by gunfire. 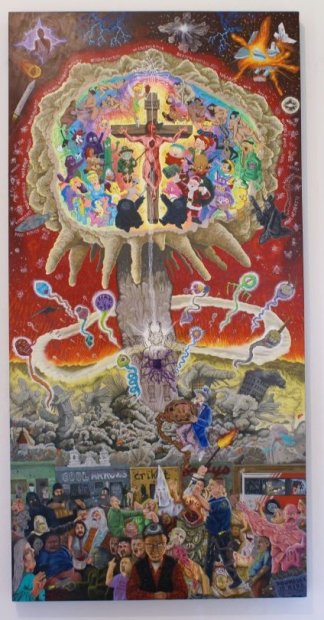 As prolific as he is with his drawings, Alvarez is also a masterful painter who, in a 2012 exhibition at Sala Diaz, demonstrated how the power and impact of a tiny little painting can resonate like a sonic boom. In a brilliant installation strategy, Alvarez left most of the gallery barren, and exhibited just a single painting. Entitled Codename Doomsday, this epic narrative is another self portrait of sorts, in that the artist depicts himself in the painting’s foreground as a visionary with a third eye, imagining the contemporary apocalypse that fills the remainder of the work. Organized into registers, the jam-packed imagery moves from the earthly realm at the bottom to a crucifixion scene in the upper regions. In the street scene staged behind Alvarez’s self portrait is a crowded display of inhumanity—derelicts observed from life combined with images of a Klansman, an Islamic terrorist holding a decapitated head, and another terrorist firing a machine gun inside a bus that passes by. As our eyes move upwards, we become witnesses to a massive explosion, the Twin Towers going up in smoke, and Uncle Sam holding a fetus attached to a woman below who is being choked by a policeman. Rising from the ashes of the explosion are several sperm-like creatures carrying evil spirits, which direct us to the mushroom cloud itself. Here we find Christ on the cross, his body saturated with blood visible from within, as if performing before an audience of cartoon characters. 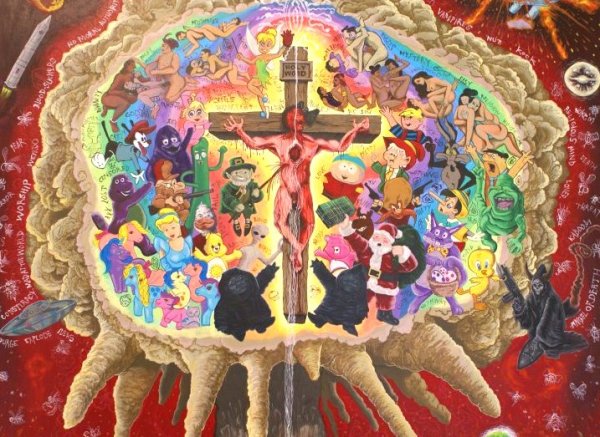 Present among the cast of characters are Santa Claus, Disney’s Pinocchio and Cinderella, Dennis the Menace, Fred Flintstone, South Park’s Eric Cartman, and Disney’s Tinkerbell, who dances on one arm of the cross while waving her wand. For Alvarez, these figures represent childhood innocence lost to memory, an idea that is suggested by a ring of copulating couples that envelops and contains them. Reflecting his interest in Buddhism, Alvarez also depicts a Buddha at upper left, presiding over the apocalypse as if it were destiny. 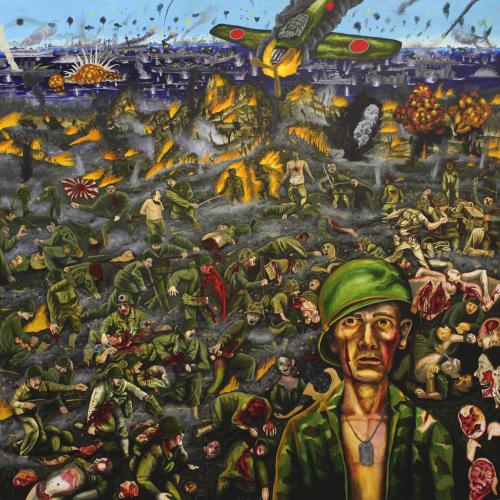 In another recent painting, which began as a memorial tribute to the artist’s late grandfather, Alvarez took on the subject of war. Alvarez became interested in World War II because his grandfather had been a soldier who fought and was wounded in the Pacific, and who received a Purple Heart and a plethora of other medals. Yet rather than see himself as some kind of hero, Alvarez’s grandfather almost never spoke about his war experiences, suffered from nightmarish flashbacks for the rest of his life, and took an antiwar stance politically. Working almost entirely from memory, Alvarez based his painting Hell in the Pacific on images remembered from media portrayals such as the film “Saving Private Ryan” and the TV miniseries “The Pacific.” In Alvarez’s painting, the foreground figure was appropriated from The 2000 Yard Stare, a famous war painting by the late El Paso artist Tom Lea. Whereas Lea’s painting emphasizes heroism and uses an idyllic landscape with subtle war references as a backdrop, Alvarez’s work details the horrific indecencies that he imagines to have filled his grandfather’s nightmares.

In Alvarez’s skilled hands, tough subjects are given uncompromisingly authentic treatment. Keen observation, skilled draftsmanship, meticulous painting technique, and an incredible attention to detail are all qualities that make Albert Alvarez’s art so visually engaging. And because “reading” his art entails a process of discovery and excavation, it becomes almost effortless for viewers to confront the unspeakable. 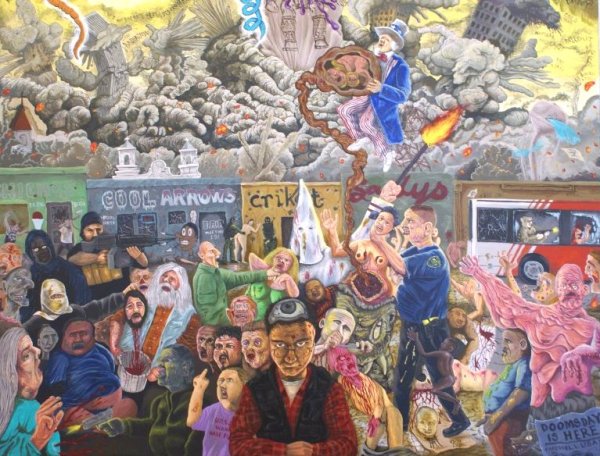 Constance Lowe and the Deception of Appearances

Sensitive writing about one of SA’s most sensitive artists–glad you are with Glasstire.

Great article! I have an old drawing of a knife inside a glass of water that Albert gave me in High School. It’s a Albert Alvarez original!

FYI – Albert was one of the most determined, talented, kind, respectful students I ever had the pleasure of teaching in Room 123 at Brackenridge High School. I wish him only the best as he continues to pursue his career as a gifted artist.

David is a good collector of Albert’s. Good thing he is writing on Glasstire, and odd he is no longer working as a curator for SAMA.