Building a Bigger Picture: Jason Salavon at The Public Trust

by Michael Frank Blair May 31, 2016
FacebookTwitterEmail 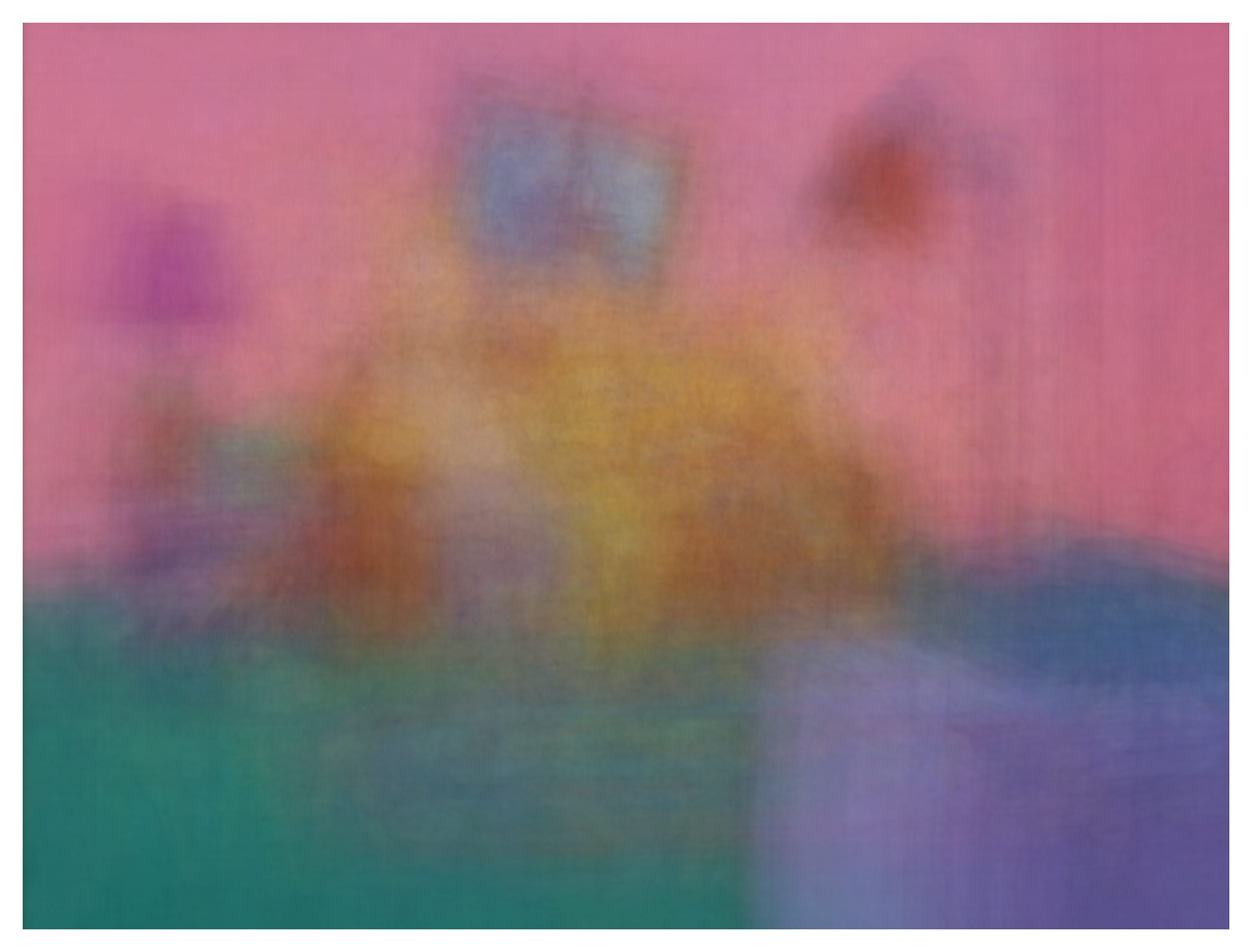 All the Ways (Couch Gag)

Jason Salavon is the fourth artist to participate in The Public Trust’s ongoing series of exhibitions under the title Soliloquy, which feature a single artwork by a selected artist. Soliloquy as a concept opens up a space for internal reflection on part of the viewer, and is here meant to open up a reflective space for the work by removing or narrowing context: asking us to look longer, harder, and with more intent than we normally would.  I’m a slow thinker, so I appreciate the series and wish more spaces would experiment with it. And Salavon’s addition to this series is dense enough visually and in implication to fill the bill and then some.

He actually cheats a bit at the game by sneaking in a couple of related works to accompany the main piece, which is a 14-by-10-foot printed wallpaper titled All the Ways (The Simpsons) affixed to the back wall of the gallery. To its left is a video feed with the same title, and in the foyer a print, All the Ways (Couch Gag).  All three pieces are generated by software the artist has written that applies algorithms to large amounts of digitized information—in this case the first 26 seasons of, of course, the animated sitcom The Simpsons.

Salavon isn’t interested so much in narrative as in the patterns found from a thousand-mile-up, God’s-eye-view of things. He recognizes what corporations have known for some time: that when culture feeds itself into large reservoirs of data, there’s a host of new, wonderful and terrible things we (and others) can do with it.  The artist seems to be on our side in this case. He slices up, compiles, reshapes and reanimates this material in an effort to get at a bigger picture of our culture at large and an outside view to its structure and scale.

As we enter the space we’re greeted by a print, All the Ways (Couch Gag). What looks at first like an ethereal watercolor with jewel-toned patches of color dissolving into each other turns out to be an amalgamation of 540 couch gags from the show (that’s roughly one per episode), layered onto each other. (The Simpsons ‘couch gag‘ is the different ending at the end of each of the show’s otherwise identical opening title sequence.) This is a kind of pictorial average that we are seeing. You can make out the general outlines of walls, carpet, lamps, and the Simpson family sitting together on the couch. There’s nothing funny in the image except that it feels strangely beautiful.

All the Ways (The Simpsons)

The video piece in the back corner of the galley is similar, showing a large number of episodes merged together and playing all at once, in real time, on a screen. It feels poetic and eerie, with ghostly traces of movement floating across the screen like steam from a coffee cup. The flat, pungent colors are here nuanced, rich, and even sophisticated. Like a lot of Salavon’s work, it’s hypnotic.

In fact, Salavon has used this same layering device in the past, in the self-explanatory Every Playboy Centerfold 1988-1997, as well as Homes for Sale, which likewise give us a composite of some of the more conventional and hardworking image-categories of our visual culture.  Leaving out the juicy details is intended to give us a clearer picture of the Jello-mold that those details squeeze into.

For the centerpiece of Salavon’s turn at Soliloquy, an imperfect grid of squares covers most of the wall, at first resembling a tapestry or textile from the 1970s, full of rich browns, burgundies, and greens. As you approach, the colors separate into the opaque, acidic palate of the TV show: radioactive green, Marge’s blue hair, banana-yellow skin, purple walls… we know this world. Each square is made up of pixel-wide bands of color forming concentric squares, giving equal weight to the prominent color from each frame, of each episode, of each season of the show, for the full 26 seasons it has been on. It’s all there, all at once, minus the dialogue, the narrative, the gestalt. It’s an indexical map of sorts worked into physical forms—a world that never before existed in the round. Standing before it is mesmerizing as we try to reconcile the chronological pattern with its simultaneous optical buzz.

And these pieces are related to other work Salavon has done with popular media. He experiments with restructuring images and video according to new space-time forms, in a sense taking the one thing that makes an image an image (the way it is perceived) and scrambling it. Data streams and signals are funneled into geometric forms, into a digital Playdough fun factory, and it makes what material existence our media images do have dance to a new rhythm. We are looking for patterns. He finds them for us. 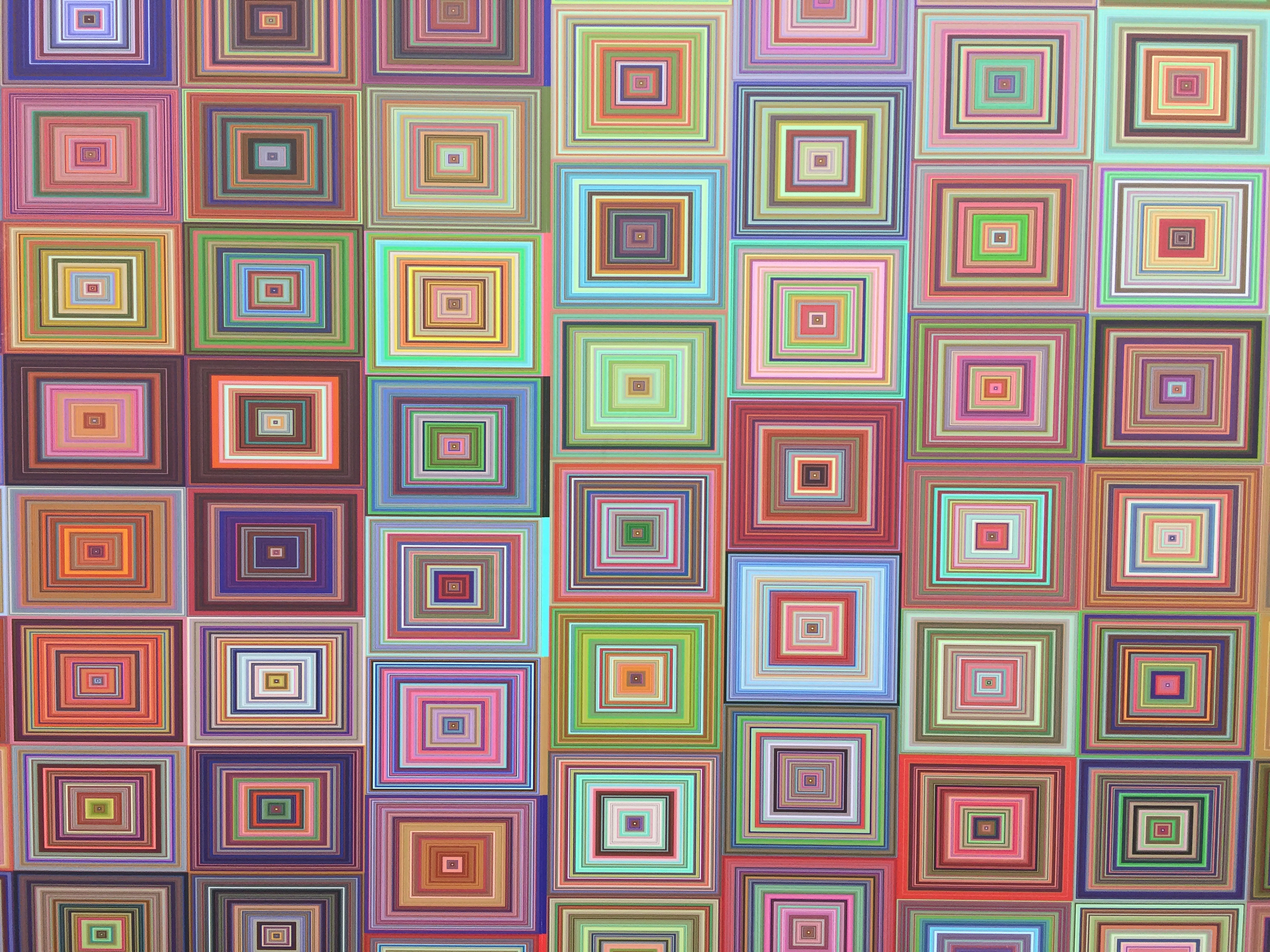 For me this speaks to the time we spend looking, and the gradual disentanglement of narrative time from the texture of real time, or how those two are overlaid and color each other. Our brains haven’t changed all that much since our species developed visual systems of representation, but the tools we use to record, represent, and re-view our realities have steadily evolved alongside technological innovation.

Salavon’s work feels like a reassessment of the visual. What I like most about these pieces is that they preserve the visual link of color throughout all of the witchcraft the software performs. And that he shapes all that vast, compressed data into aesthetic objects that appeal to ways of knowing even our ancestors might recognize. Thanks to The Public Trust for giving us the space to mull it over.

Through June 19 at The Public Trust, Dallas.