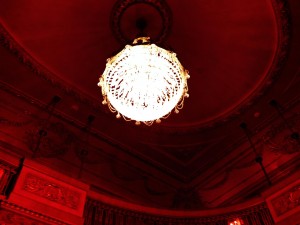 Gregory Ruppe and Jeff Gibbons, two Dallas-based visual artists who often collaborate and recently launched the venue-within-a-venue Culture Hole, have designed the sets for an upcoming performance by Dallas Neo-Classical Ballet. Poe’s Masque of the Red Death has been adapted by the company for a full-length ballet, along with composer Jordan Kuspa. The music will be performed “by SMU’s new music ensemble, SYZYGY, led by Matt Albert.”

This is Dallas Neo-Classical Ballet’s fifth production since it launched in 2011 (it was founded by Emilie Skinner and Victoria Tran). Think of this as being in the tradition of Merce Cunningham working with Rauschenberg (over decades), Leigh Bowery designing costumes for Michael Clark’s productions, and closer to home and more recently the Dallas Opera commissioning set design by Frances Bagley and Tom Orr (for 2006’s Nabucco). Ruppe and Gibbons are technically the artistic directors of this Masque. It’s one night only, at the Majestic Theater, on April 7.

Info and tickets here and here.