by Thomas Ezekiel Williams May 21, 2013
FacebookTwitterEmail

Overall, Jeff Gibbons’ show(s) at Oliver Francis Gallery in Dallas is great—please go see it. It feels a little disjointed, but dealing with it by apologetically making the exhibition into “four solo shows” is unnecessarily cute, and is one concept too many. The work is above that. Here is my review, in three parts. 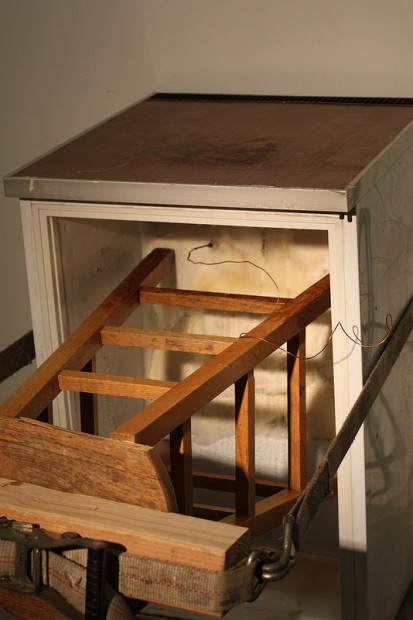 In “CHEE$E,” a door-less mini-fridge preserves a slab of fresh-made milk curd behind a plexiglass sheet, held in place by a stool and a large ratchet strap from a flatbed semi-trailer. This thing makes me feel at peace with the universe; it’s so simple—yet details like the hole drilled in the plexi for the thermocouple and the stool stolen from the artist’s alma mater make it really perfect. 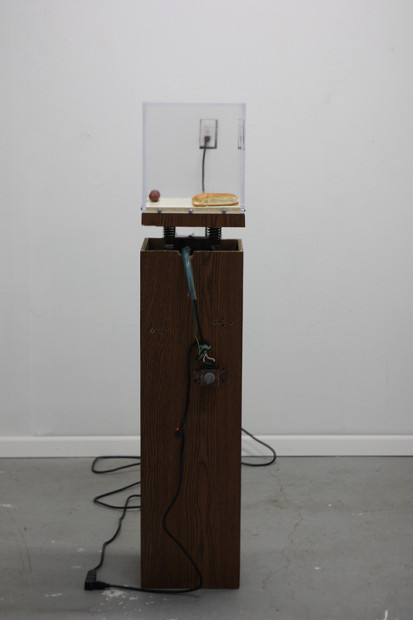 “Chances Are” is at the opposite end of the gallery. A plexiglass box containing a cooked hot link and a lightly toasted bun sits on a pedestal. Periodically, a machine within the pedestal starts vibrating in a non-threatening way, causing the hot dog and bun to chase each other around in a Freudian re-enactment of tabletop football games from the 70s. When it shuts down, the machine lurches and clumps to a halt in a violent rage. 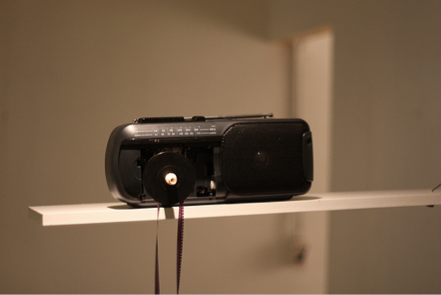 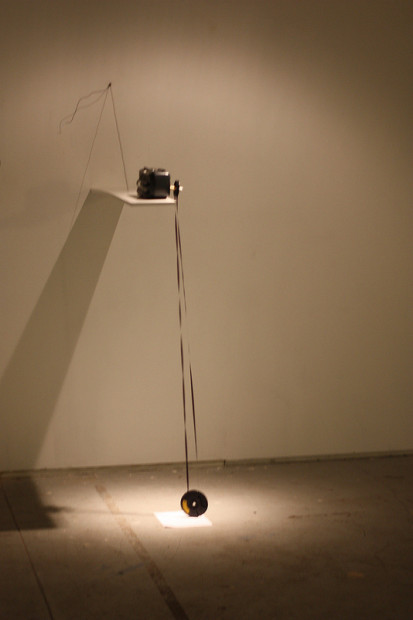 In “It Makes Me Cry Sometimes,” a cassette deck placed on a rickety shelf has been modified to wind a long loop of film that reaches down to a reel on the floor with a piece of paper underneath, meanwhile blaring a hauntingly modified version of the Beach Boys’ “Don’t Worry Baby.” The reel’s movements, along with the soundtrack, are hypnotic but it still seems to be missing something. 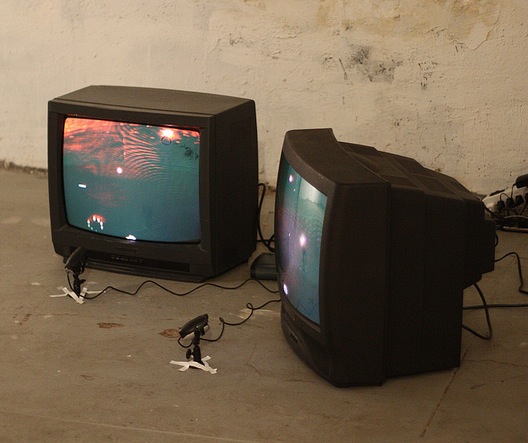 In “Mirror,” two classic tube TVs sit on the floor. Each has a small camera mounted in front of it and displays the other’s camera feed, giving a charming feedback effect. As people move about the room, the changes are reflected in the tubes and mixed into the feedback. This thing is fun to look at but I do not understand why it is on the floor; the decision seems arbitrary.

The Not So Much

The three mostly 2-D pieces in the show are all overpowered and feel unnecessary.  “Swiss on Table,” an embossed drawing of a hunk of swiss cheese on a plate, sits below a wall sconce borrowed from the artist’s apartment building. “Nothing is Real” is a pretty cool drawing of a refrigerator with a penis, next to some forgettable text. Finally, “Intermission,” a composite photograph of every frame of Gone With the Wind, has the word “Intermission” either superimposed on top or it has risen to the top of the composite, as it was the only thing sitting still.

What About Painting? A Chat With Jeff Gibbons

I saw this show last weekend while in Dallas and was blown away by the strength of the work! The deep intricacies and playful nature are quite impressive!

Had a chance to visit with Jeff in his studio and see some of this work recently — Boylet Toilet is still my favorite, but I agree that the absurdity and intricacy of his pieces (especially when you see a lot of them) are really something. Sorry to have missed this show, thanks for the post!

It seems to me that the “Good” and “Not So Much” pieces may be being penalized somewhat unfairly by comparison to the more spectacular works.

I believe the show will be up for a while longer, and f.w.i.w., recommend it.