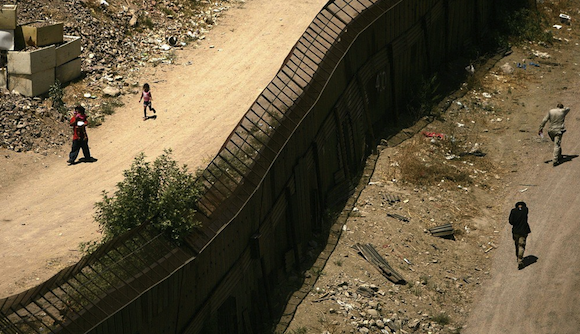 An online competition calling for architectural proposals for a Donald Trump-inspired border wall design has sparked much controversy in the architectural world and border communities, reports Sukjong Hong in today’s New Republic.

The competition, “Building the Border Wall?” (originally posted without the question mark), calls for architects to “Design a barrier of architectural merit that is realistically priced to build and made of materials that will not only be effective in keeping out waves of illegal immigration, but that will also be relatively inexpensive to maintain.”

The Third Mind Foundation—a group of “architects, designers, and artists who wish to remain anonymous,” according to its website—is sponsoring the competition. On the jury page, a panel composed of deceased luminaries such as Frida Kahlo, Rosa Parks, John F. Kennedy, and Buckminster Fuller presides. The Foundation also states, “We take no position on this issue. We remain politically neutral.”

Many architects and community leaders are outraged and calling for a boycott of the competition and those related to the competition, calling it a promotion of xenophobia. Some are viewing it as an opportunity to “work within the system” in order to turn it on its head. Many border community leaders are suggesting that there are much more pertinent issues along the border that architects could work on.

Ten years ago, in 2006, The New York Times held a similar competition (the issue/topic is not new) and to my recollection there was no controversy.
http://www.nytimes.com/2006/06/18/weekinreview/18hamilton.html