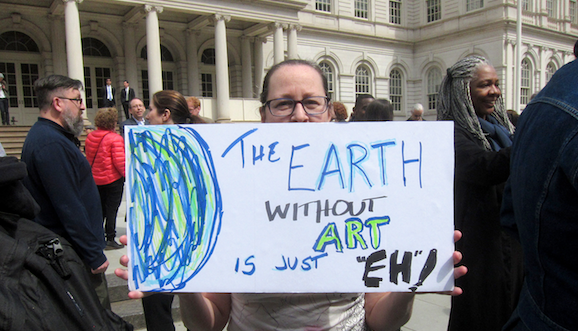 Artforum recently quoted Americans for the Arts president and CEO Robert L. Lynch: “The nation’s arts and culture industry supports 4.8 million jobs and yields a $26 billion trade surplus for our country. Despite the president’s State of the Union speech proclaiming ‘Americans fill the world with art and music,’ there seems to be a disconnect on the need to invest in our nation’s future support of the arts and arts education. The federal investment in the arts helps power the creative economy across the country.”

President Trump lied to the National Endowment for the Arts (NEA). And the National Endowment for the Humanities (NEH). And other important national arts related organizations. “Americans fill the world with art and music,” stated Trump in his recent speech, while simultaneously presenting the 2019 budget, which would drastically reduce allotments to all agencies to amounts just enough to untangle themselves from the government and ready themselves for total demise.

Trump’s attempts to eliminate these agencies failed last year. But Texas is not an alimony-friendly state, so arts organizations might need to get ready for the big break up.