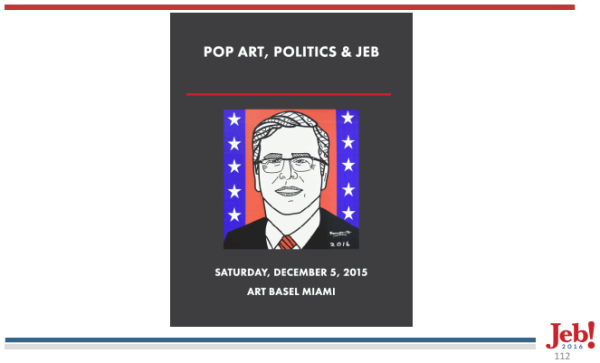 A few days ago, U.S. News &World Report obtained an internal 112-page document from the less-than-inspired Jeb Bush presidential campaign. Among the many strategies outlined for the upcoming months was this tidbit:

They’ll need that message to be heeded in order to make it to their fourth-quarter fundraising rollout, scheduled for Dec. 5 at the trendy Art Basel in Miami. The event is called, “Pop Art, Politics & Jeb.”

A fundraising party at Art Basel Miami? Not a bad idea, considering how much money will be floating around in one spot on one weekend. But vying for attention at what has become a celebrity-packed circus has certainly got to be more difficult than trying to outpoll a dozen Republican candidates.

Just what do Pop art, politics, and Jeb Bush have in common? Maybe Jeb is investigating a possible backup career as his artistic brother’s gallerist.