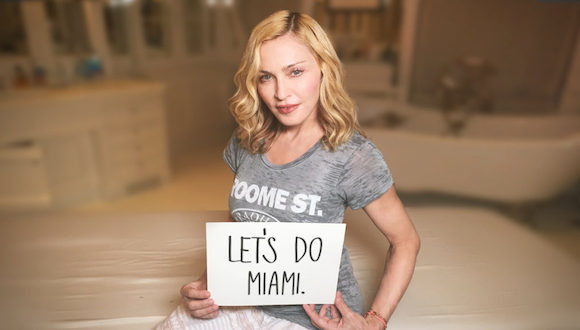 A few days ago, Artnet News reported that pop superstar Madonna wants to take an art world virgin and their lucky plus-one on an all-expenses-paid vacation to Art Basel Miami. There’s one catch: to be eligible, you have to donate to the latest fundraising campaign for Raising Malawi, a nonprofit co-founded by Madonna in 2006. Via the campaign’s page:

Are you Like a Virgin to the art scene? There’s no better place to immerse yourself in some of the world’s most inspiring artists, galleries and collections than Art Basel. And when you factor in the one and only Madonna, who’ll be there in all her Madonna glory, you’ll be Vogue-ing your way to popstar heaven. Grab a friend and head to Miami, where you’ll go to Art Basel, get pop cultured at an art auction and then get 1-on-1 hangout time with the music queen and Ray of Light herself! Yes… your pop music prayers have been answered. Flights and hotel included.

Even though there is only one grand prize winner, art enthusiasts can win other prizes from the campaign—who wouldn’t love a set of four serigraphs featuring exclusive images of Madonna? Or a lithograph from the singer’s Erotica concert tour? (Yours for only $5,000!)

It is unclear if Madonna is officially in cahoots or collaborating with any aspect of this year’s art Miami art week—will she perform? Will she curate a show? Only time will tell. Until then, art virgins can dream of a fantasy involving some art and a whole lot of costume changes.