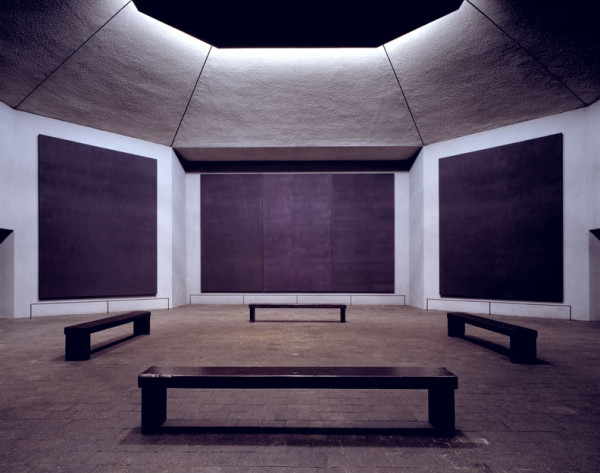 A few days ago, superstar astrophysicist Neil deGrasse Tyson (director of New York City’s Hayden Planetarium and executive editor/host of Cosmos: A SpaceTime Odyssey, the recent reboot of Carl Sagan’s landmark television series) posted an AMA (“ask me anything”) on reddit on the topic of art.

Of the many questions asked, one was, “Which three works of art would you choose to give to an alien species that you feel best expresses the human experience?” The Rothko Chapel topped his list! Here is Tyson’s response:

I think I would have them visit the Rothko Chapel, in Houston. Obviously, there’s more than one work of art there, but it emanates from the same soul of creativity. That would be one of them, if I would be allowed to group that as one work of art.

Another group of art, I would say the Sistine Chapel, the ceiling. That captures the height of our artistic expression, triggered by religious emotion. And religion is a big part of what civilization has been. The Rothko Chapel is a path to your inner solitude.

And the fact that art can get you there – in a space, I think – matters.

And I would say third, again it’s a space – the Waterlily Room, in Paris, where you have the Waterlilies, where as Impressionist Art, you don’t think Waterlilies by seeing the artwork, you feel them. And it’s a way to have art convey a feeling more than a visual.

And this would tell the aliens that we, as a species, do much more than think.

And then they’d have to contend with that.

Maybe they’d vaporize us, haha! I don’t know any force operating in our culture but art to capture that fact.

(Thanks to Cody Ledvina for catching this and passing it on to Glasstire!)

As a Houstonian, I’ve been to Rothko several times. I’d love to go to the others someday. My experience in the Rothko is that of being claustrophobic and yet expanded into the entire universe at the same time. As such, I believe it would be an excellent choice to show aliens. I’m just not sure what they would make of it.

Damn!Tyson states that these are places we FEEL, and now “Houston’s second poet laureate” proves it!
http://www.chron.com/opinion/outlook/article/Houston-s-poet-laureate-connects-with-our-city-6327987.php

Please invite to aliens for visits on this earth