The three recipients of the 2020 Óscar Romero Awards: From Left: Gérman Chirinos of Honduras, Bernadette Demientieff of Alaska, and Jorge Díaz of Puerto Rico.

An award ceremony for the winners of The Rothko Chapel’s biannual Óscar Romero Award (ORA) will be live-streamed by the Rothko Chapel on Tuesday, June 30. The award, which Glasstire announced this past April, recognizes “courageous, grassroots, human rights advocacy.”  The 2020 focus on climate justice is echoed in the works of this year’s honorees Gérman Chirinos of Honduras, Bernadette Demientieff of Alaska, and Jorge Díaz of Puerto Rico. Their work in the areas of art, spirituality, and human rights exemplifies a commitment to climate justice and the creation of a more sustainable, livable world.

Executive Director of the Rothko Chapel, David Leslie, will host the virtual ceremony, with an invocation from Myokei Caine-Barrett, Shonin, the Resident Priest of Houston’s Myoken-ji Temple. The 6:00 PM CDT ceremony will be available in English and Spanish, and  attendees can register on the Rothko’s website here.

“We were looking forward to having the Óscar Romero Award be the first major program in the restored Chapel and expanded campus and are committed to moving forward with this timely and important program, in spite of the pandemic, in order to present the work of these courageous activists to an even larger audience through streaming,” says Leslie. 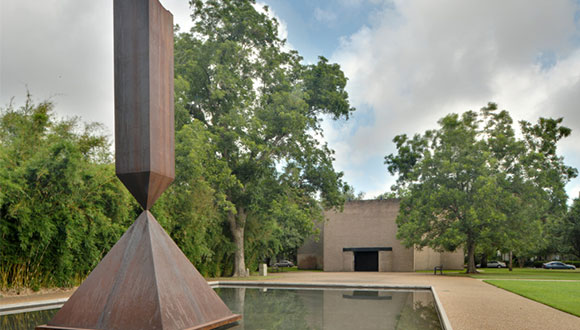 The Rothko Chapel, which has been closed since March 4 of last year, and was scheduled to open this June after the completion of Phase One of its $30-million overall improvement plan, remains closed due to the Coronavirus pandemic.

Saint Óscar Romero, canonized in 2018, is the award’s namesake. As Archbishop of San Salvador, Romero was assassinated by Salvadoran extremist political forces on March 24, 1980. Romero opposed military violence and courageously defended the poor and others at the margins of El Salvador’s society.

The Rothko Chapel has bestowed the ORA since 1986 to human rights activists who often work under extraordinary circumstances in the advancement of human rights around the world. An unrestricted cash stipend is awarded to the selected honorees to further their work and increase its visibility.

“This year’s award expands upon our 2019 Spring Symposium, which explored the wide-ranging impact that climate change is having on frontline and marginalized communities around the globe,” explains Leslie. The program is underwritten by The Jacob and Terese Hershey Foundation.

The winners of the 2020 Óscar Romero Award, via the Rothko Chapel, are as follows:

Gérman Chirinos
“Gérman Chirinos is a land and water rights activist from Honduras. He is fighting for the future of formerly protected lands in southern Honduras that are facing invasive development projects that limit community access to water and land. Gérman helped found the Southern Environmental Movement for Life or MASSVIDA, an association of 37 communities in active resistance to the destruction of land and water. Gérman’s steadfast commitment to his work comes at great personal risk, as there have been two attempts on his life. Upon announcement of receiving the ORA, Gérman said, ‘This award will help to shed light on our struggle and the human rights violations committed against the communities that make up MASSVIDA. We will no longer be silenced; our work will become known.'”

Bernadette Demientieff
“Bernadette Demientieff of the Gwichyaa Zhee Gwich’in tribe in Fort Yukon, Alaska, is Executive Director of the Gwich’in Steering Committee, which was formed in response to proposals to drill for oil in the coastal plain of the Arctic National Wildlife Refuge. Bernadette has devoted herself to protecting the land that the Gwich’in people refer to as ‘The Sacred Place Where Life Begins.’ She also serves as an advisory board member for NDN Collective, the Care of Creations Task Force, Native Movement Alaska, and Defend the Sacred Alaska. When asked about her years of environmental advocacy, Bernadette said, ‘I am not an activist or an environmentalist; the fight came to my front door. We must all remember that we are on a spiritual path and that co-existing and respecting each other’s ways of life is important. We have to remember that being kind and compassionate is part of creating a beautiful world.'”

Jorge Díaz
“Jorge Díaz, co-founder of AgitArte, is a puppeteer, educator and bicultural organizer committed to working class struggles against oppressive systems. Jorge has been working on the frontlines in response to the climate crisis and political catastrophe caused by government handling of recent natural disasters in Puerto Rico. Jorge is an editor of the book When We Fight, We Win!, which sheds light on the stories, philosophies, tactics, and art of today’s most pressing movements including the environmental movement, immigrant rights, prison justice, and the LGBTQ movement. Jorge is also a founding member of Papel Machete, a collective of radical artists dedicated to education, agitation and solidarity work in Puerto Rico and its Diaspora.”

The 2020 Óscar Romero Award also serves as the launch for a series of programs that celebrates and reflects upon the upcoming 50th anniversary of the Chapel’s dedication, which will be celebrated beginning in 2021.

The Rothko Chapel is a contemplative space that interconnects art, spirituality and compassionate action through a broad array of public programs and community initiatives.  It is open to the public every day of the year at no charge.  Founded by Houston philanthropists Dominique and John de Menil, the Chapel was dedicated in 1971 as an interfaith, nonsectarian sanctuary, and invites visitors from around the world to experience the power and sanctity of Mark Rothko’s monumental paintings. The Rothko Chapel is an independent non-profit organization whose mission is to create opportunities for spiritual growth and dialogue that illuminate our shared humanity and inspire action leading to a world in which all are treated with dignity and respect.

Emerging from a Challenging Year