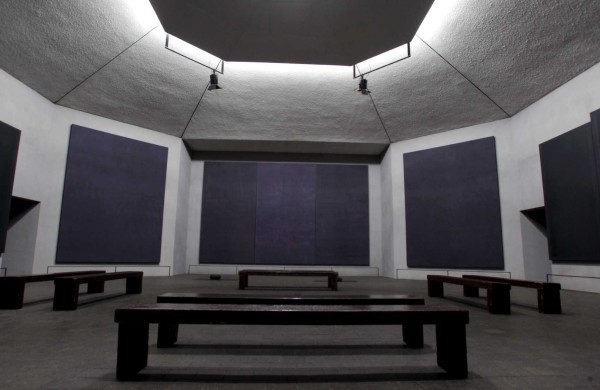 Beginning on March 4, 2019, Houston’s Rothko Chapel will be temporarily closed while improvements, upgrades, and new constructions are added to the building and its campus. The chapel itself will be closed through December 21, 2019 and will reopen with a modified entryway, audio, security and fire systems, and a new lighting system. This project aims to revamp the darkened interior that has been a hallmark of the building since soon after its construction. 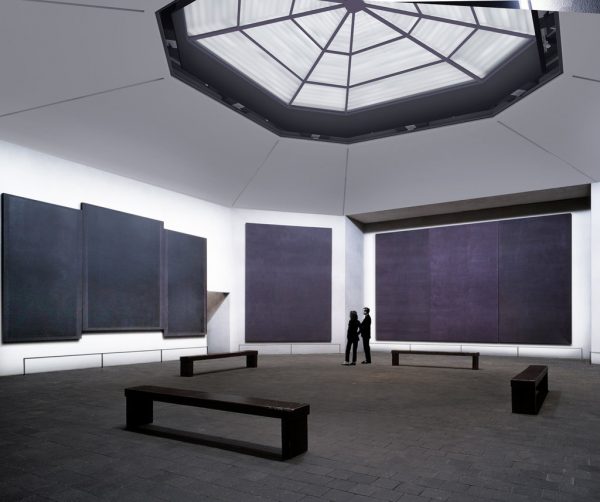 When the Chapel was in its planning phase, Mark Rothko had wanted to model the space after his New York studio, which included a large skylight. Once this design came to fruition in Houston, however, the natural light was so intense that the institution feared the sun’s UV rays would damage Mr. Rothko’s paintings, and subsequently chose to mute the skylight’s effect. Now, the Chapel is working with George Sexton, a lighting designer, to create a special skylight that will allow softened light to come into the space. This retooling of the building also includes a new lighting system that uses digital projectors to cast even light within the space.

A comparison of skylight and baffle systems that have been installed at the Rothko Chapel, left, with a new design by George Sexton designed to create the quality of daylight that artist Mark Rothko wanted for his 14 paintings. Photo: Houston Chronicle / Rothko Chapel

Another part of the institution’s $30 million restoration and expansion project is the construction of a visitor welcome center just across the street from the Chapel. This new building will help contextualize the Chapel and Mr. Rothko’s work, will act as a space where visitors and groups can gather, and will also double as an expanded bookstore for the institution. Two other new buildings will help with programmatic and administrative needs: a program center will accommodate the Chapel’s robust schedule of public programs, providing spaces for presentations, performances, film screenings, and other events; and a new building for archives, a library and administration offices will support the institution’s staff.

A rendering of the new Welcome House, left, administrative offices, meeting room and plaza that will be built across Sul Ross Street from the Rothko Chapel. Photo: Houston Chronicle / Architecture Research Office (ARO)

The project also incorporates smaller improvements to the grounds surrounding the Chapel, both in the expansion of greenspaces and in improving the walkways around the reflecting pool. With Houston’s history of flooding in mind, the Chapel will construct a new, elevated energy building for its mechanical systems. The plan does not mention Barnett Newman’s Broken Obelisk sculpture, which was recently restored.

Since it was founded in 1971 by John and Dominique de Menil, the Chapel has served as a Houston institution dedicated both to art and social justice. The non-denominational spiritual space, which the de Menils commissioned from Mr. Rothko, regularly hosts talks and symposia on issues ranging from civil rights and gender equality to the lasting effects of climate change on humanity.

The Chapel’s first phase of renovations, including the reopening of its building and the grand opening of its visitor center, is expected to be completed by the end of 2019. The second phase of the project, which includes its program center and administration and archive building, is slated for completion in 2022.