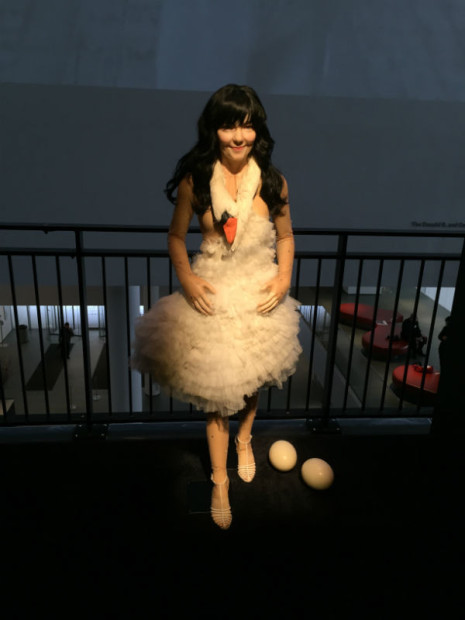 In his review titled Ladies and Gentlemen, the Björk Show at MoMA Is Bad, Really Bad, national art critic Ben Davis introduced the news about the blockbuster show that will open to the public on Sunday, March 8, at the Museum of Modern Art:

There has been an immense volcano building up under the Museum of Modern Art for some time, a well of rage from old-school art fans about its turn towards commerce and celebrity and tourism. The current Björk show, celebrating the Icelandic songstress as, in the words of curator Klaus Biesenbach in the catalogue, an “era-defining artist,” will very likely be occasion for an eruption. You may expect an immense Eyjafjallajökull-sized ash-plume of critical bile to appear over midtown any second now. Because, ladies and gentlemen, this show is bad.

I went in ready to defend MoMA. Björk, I thought, is something interesting, the epitome of a certain kind of odd-duck cool. Many, many reviews will be written about MoMA’s “Björk” show fiasco—scathing, hilarious reviews, reviews whose savagery will be in direct proportion to the smarmy hype leading up to it—based on the premise that celebrating a pop star is by itself bad. I don’t agree. Nothing in principle is bad about a Björk show, or even about a little pop-culture populism.

But the pop turn raises challenges that have to be thoughtfully addressed. It has to be done right. You need to nail it, and MoMA has instead stepped on a nail, or rather, hot lava.

A Strangely Unambitious Hotchpotch, by Jason Farago, The Guardian

Björk will be on view to the public at the Museum of Modern Art, 11 West 53rd Street, New York, from March 8–June 7.

I love Bjork and have been disappointed by all this, but–given that it’s MoMA–not terribly surprised. It’s not impossible to mount a great show of a rock star (the David Bowie show at the V&E was supposedly quite good) but apparently this ain’t it.

Pop music, even at it’s best isn’t appropriate for MOMA. Artists seem to have a hard time understanding that liking or supporting pop music doesn’t make you interesting or different it makes you normal – and there is nothing wrong with that.
So much of these things (dance-party-as-artwork, pop star art shows, artists singing an ironic pop song as performance)  play into the old, tired idea that academia and the “art establishment” are the enemy when really it is corporate pop culture. As much more experimental as Björk is than most other pop musicians, she remains part of corporate music machine and this show is just a cash grab. They may as well do a Jackass show and tie it into “endurance performance art”. Jackass actually outdoes so much performance art but I still believe intent is important to an artwork.