(Ed note: Sometimes Glasstire’s Brandon Zech returns from a large art event with some insightful and keen-eyed observations about how it could be better next time around. Here’s his latest.)

Day for Night is a two-year-old music and art festival hosted in Houston. I attended the festival’s first iteration in 2015 and had a truly good time. Last year’s Day for Night featured light installations and three stages spread across the grounds of cavernous warehouse spaces in Houston’s Washington Avenue district. The bill for the festival was strong, featuring sets by Kendrick Lamar and New Order, and art installations by Nonotak Studio and Casey Reas, among others. 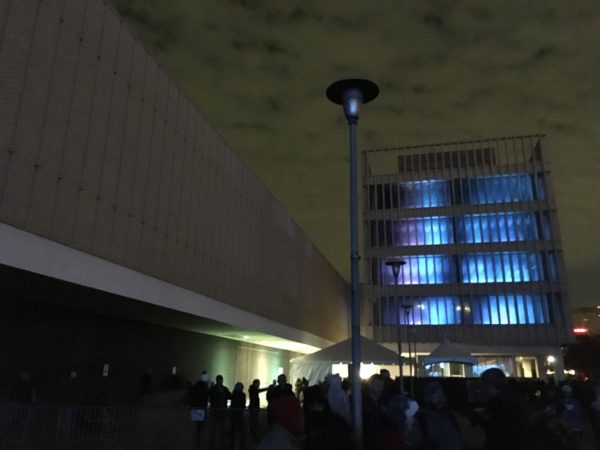 Day for Night 2016 at the Barbara Jordan Post Office

This year’s Day for Night, held last weekend, was set to go above and beyond last year’s offerings. Day for Night was moved to downtown Houston’s Barbara Jordan Post Office, an enigmatic and abandoned 16-acre midcentury building. As for the lineup, the festival reupped Nonotak, added a host of other artists, and was able to secure a set by electronic musician Aphex Twin—his first U.S. performance in eight years.

Day for Night 2016 was set up to succeed, and it did in some respects. The lineup was phenomenal, the brutalist post-office building was fantastic, and the light installations were even better than last year’s. However, with large-scale immersive experiences, the devil is in the details—you don’t want to be jarred out of your festival bliss by the myriad things that either don’t work or are victims of organizational neglect. The general feeling I got is that Day for Night 2016 needed some help. Here is how the organizers could turn the ship around before next year’s run.

1. Don’t ghettoize the stage that boasts hometown heroes and local talent. The festival’s smallest stage, which offered Houston acts like Fat Tony, the Wild Moccasins, and MNYNMS, was sequestered behind the looming post office building, and was hard to get to since there was no way to cut through the building. It was also nestled behind dumpsters overflowing with trash (see below). I don’t know where else the local stage should have fit into the festival, but if it weren’t for the festival map (also see below), I wouldn’t have even known it was back there.

2. Have enough trash cans for the number of people you expect to attend your event. Festival attendees can be pigs and will throw nearly anything on the ground; we know this. But if they can’t throw their trash in a can because every can or dumpster they encounter is already overflowing, then they can’t be blamed. 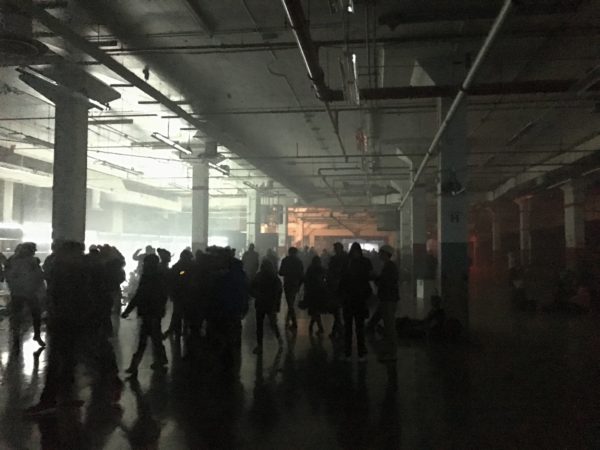 3. Provide some sort of physical schedule and/or map to the festival attendees. In my two days at the festival, I looked for and never once saw a pocket-sized printed version of the festival’s map or schedule. The mobile version worked okay, but nothing beats having a physical copy in your back pocket, and phones don’t always work inside concrete buildings.

4. Don’t advertise something as an accessible experience when it won’t be. Björk Digital was Day for Night’s headlining art installation. Advertised as “an immersive exhibition of digital and video works,” it promised a “private theatrical experience” of Björk’s work. Boy was it private. I was not aware of the advance reservations that were required to see Björk Digital, and evidently many others weren’t either. It was announced on the festival’s Facebook page (and to people who had already bought their tickets)—but even that registration process didn’t go smoothly for many. At the festival, only 25 people were admitted to the installation at a time. However, there was a standby line, so that when someone didn’t show up for their reservation, you could take their spot! This line was long with hopeful festival-goers, many of whom spent most of their day waiting, only to be turned away. Even the success stories are miserable—I have friends who waited eight hours in the standby line before they were admitted.

There are remedies for this. Day for Night could have been far clearer in all its promo material about the strict exclusivity of the installation; or it could have kept Björk Digital open after the festival was over and allowed people to schedule reservations throughout the rest of the week. Or, Day for Night could have charged extra admission to the installation and made even more money. At least then people would have known what they were paying for, and wouldn’t have been expecting an experience that was impossible to have. 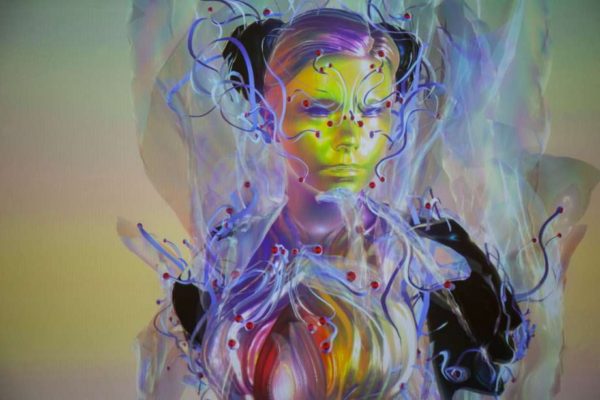 5. If you charge a mint for VIP status, treat your VIPs like kings. I can’t speak on this firsthand, but there have been a number of people crying out on social media that their VIP passes weren’t worth the money. I guess if you pay $700 for a VIP ticket you would expect people to kiss your feet upon arrival. Or maybe that’s just me.

6. Have a way for people to wash their hands or find free water, or some kind of alternative. This one is self-explanatory. I used a restroom in the building and… surprise! The sinks had no running water. There was also no hand sanitizer around. Some of the porta-potty stations were better about this, but inside the building, not so much. This is also where water refill stations throughout the festival grounds could’ve come in handy, had there been any.

7. Have enough passes for press. My press credentials had been pre-approved online, but then there was a mix-up when the festival started, and I didn’t know if I could even get in until 4 p.m. the day of. (The doors opened at 2 p.m.) I wasn’t the only press member who experienced this maddening glitch.

8. Even the smallest things matter, in terms of a sense of professionalism. Blonde Redhead’s flight to Houston was cancelled. This isn’t the festival’s fault. But misspelling “unfortunately” on the stage’s sign is. I understand that the festival’s staff is under a lot of pressure to make things run smoothly, but it’s important that they take an extra minute and make sure things are done right, or else it undermines festival-goers’ sense about who’s in charge of their experience. 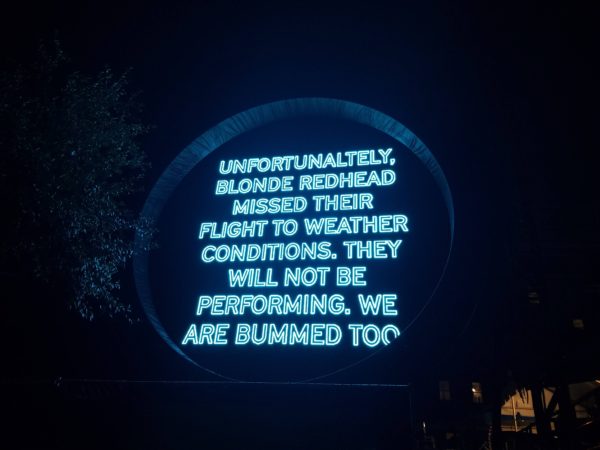 So overall, the festival suffered from rookie mistakes that could have (and should have) been avoided. Free Press Houston, one of the event’s hosts, is no stranger to festivals; for a while they ran the Free Press Summer Fest—I went to the first one back in 2009 and it was great. They also ran last year’s Day for Night which, in my experience, went off much more smoothly than this year’s. Houston needs a good festival, and Day for Night has the potential to be just that. Here’s to hoping this year was only a sophomore slump.

For those who remember (and I don’t), RIP the beautiful Southern Pacific station on this site that was on torn down to make way for the tremendously ugly post office, whose own days are numbered.

I wish we had bullet trains in Texas.