From uptown to midtown ….my art odyssey continued with visits to El Museo del Barrio, the Whitney, and  MoMA. Stay tuned for parts 3 and 4, featuring some galleries, later this week.

EL MUSEO DEL BARRIO / HERE IS WHERE WE JUMP

This was a group exhibition of young/emerging artists, often working with issues of Latino identity. An overriding theme was work that dealt with or re-interpreted images associated with colonialism and works of high modernism. I read these as attempts to inject a counter voice to the white male versions of cultural and art history, but they often came off as one note. A lot of the work felt fresh out of school and not quite fully resolved or developed yet, but it was good to see some new work by artists I had not heard of. Here are a few images to follow with brief notes. 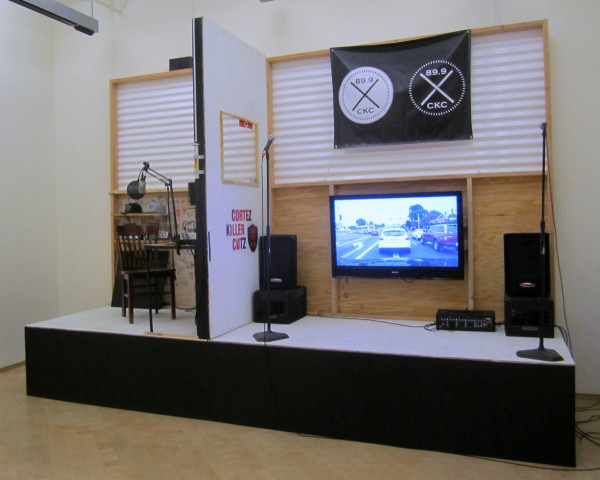 I loved the spirit of this radio program, but I wished there had been more to look at/experience in the gallery. Eric Ramos Guerrero borrowed Columbia University’s radio frequency to broadcast in Brooklyn a “dedication” show similar to the Sunday evening programs on the radio in San Diego where Guerrero grew up. Dedication shows often consisted of women dedicating songs to incarcerated boyfriends, gangs commemorating fellow gang members, or teenagers celebrating new love. I liked listening to the music, the sentiment behind it, transposing something from one place to another and from childhood to the present. 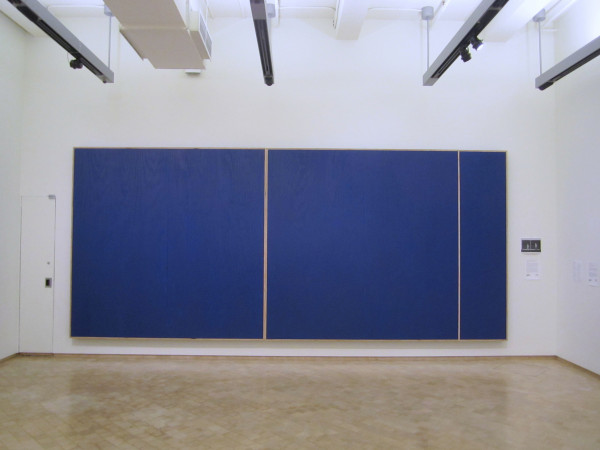 Giandomenico Tonatiuh Pellizzi’s Transitional Geometry (Cathedra) was an actual size, plywood version of Barnett Newman’s Cathedra painting which was slashed with a box cutter in 1997 by Gerard Jan van Balderan. Veneration or degradation? 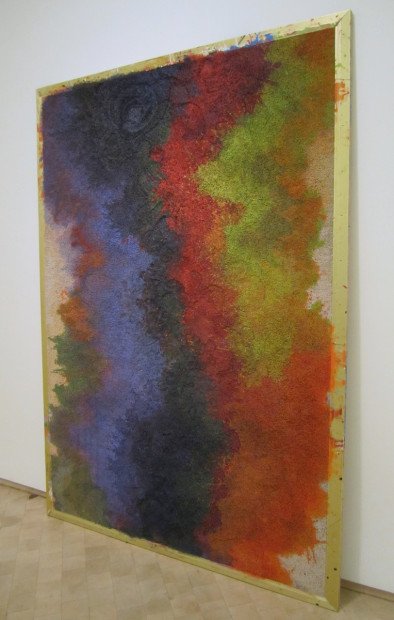 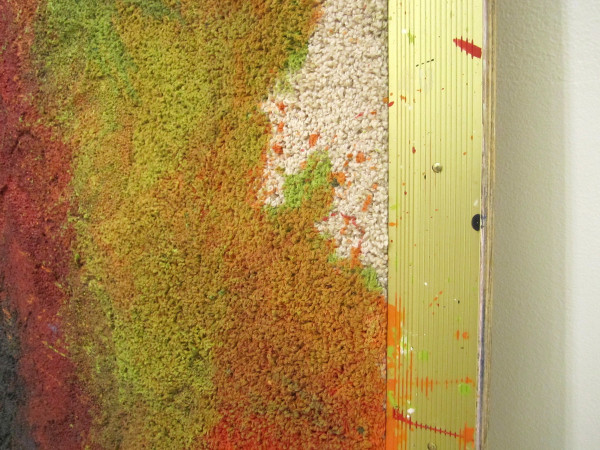 A riff on a Morris Louis stain painting, Matias Cuevas’ Image and Likeness is made from carpet and leaning against the wall. More clearly a kind of “lowering” or sullying, putting painting into an everyday, vernacular language, but it risks being a little heavy handed with literally “stained” carpet. Also, do these kinds of art historical references really have that much power/weight/baggage or are they an easy way to make work that is immediately regarded as “serious” or engaged in some kind of art conversation? (This is always an open question for me when it comes to art that relies on “high” art references.) Also, everyday materials seem almost more common now to see in galleries/museums than “fine art” canvases and oil paint. Perhaps the “shock” or assumed edginess of high/low mixing does not have the sting it used to. Just a thought. 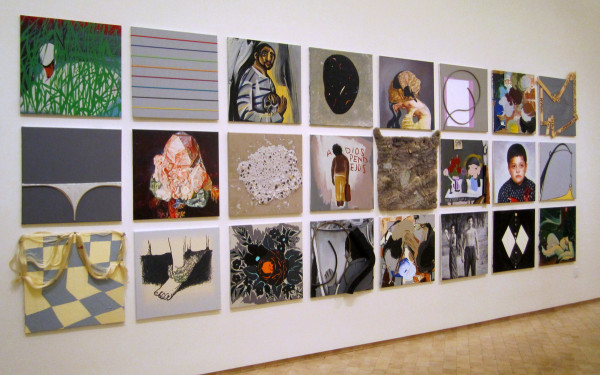 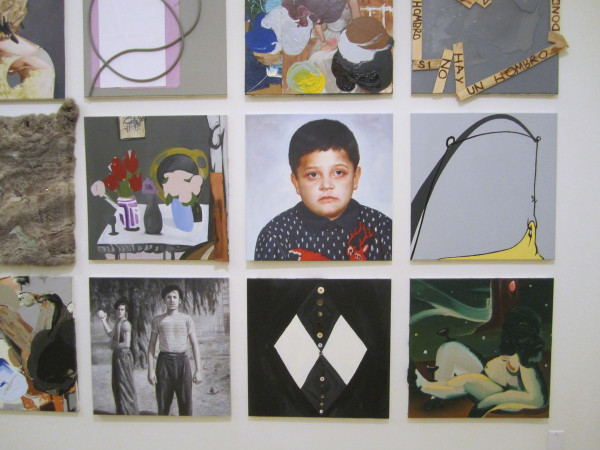 Polyglot painting by Edgar Serrano. Like many other “no-one-style” painters, Serrano skillfully mixes clunky abstraction, abject surfaces/materials, photorealism, surrealism, and cartoony/graphic/flat graphics. I liked the variety and some of the individual paintings, but I could not piece together the whole story or what they were leaving me with. The wall text said that Serrano hopes to “confront and disrupt racial stereotypes,” but I could not decipher this.

This was a large exhibition of a particular brand of performance art done during 1970-80 in New York that deconstructed or pulled apart the theatrical experience to create an unconventional form with fetishized props, manic monologues/self-dramatization, and often minimal narrative/structure. These were often performed late night in lofts, storefronts, and alternative spaces, and the exhibition attempted to bring them to life by displaying them with original or reconstructed props/sets. It was a history lesson of a specific moment, but at times very difficult to get through the grainy videos and lengthy texts. The reconstruction was well-executed and informative, but left me with the nagging feeling that, once a live performance is over, it’s over. 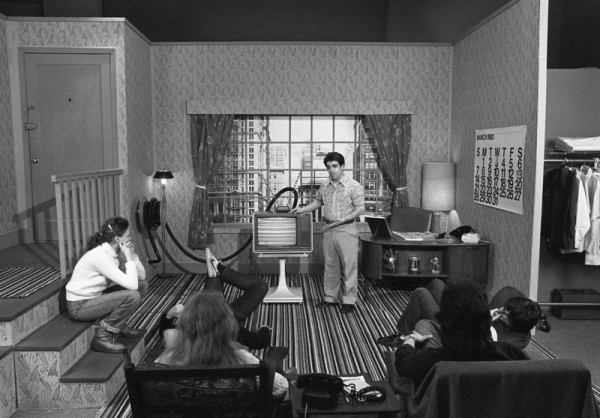 One gallery was devoted to Michael Smith’s lonely/everyman character who parodies television commercials, sitcoms, and musical theater to transform it all into something that is at once sad and comic. 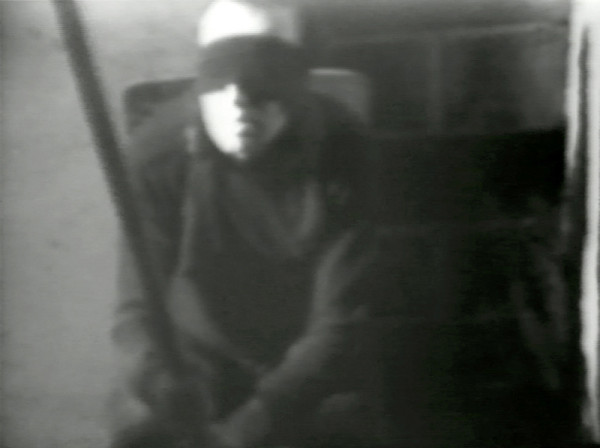 The exhibition includes documentation of one of Vito Acconci’s unsettling performances. Here, he sat for three hours in the basement of 93 Grand Street and waved a metal pipe and a crowbar to ward off anyone who tried to come near him, often threatening to kill them. As the title implies, he “claimed” his space in a typically off-kilter, obsessive, paranoid fashion. Visitors to the gallery at the time could watch on a video monitor upstairs. 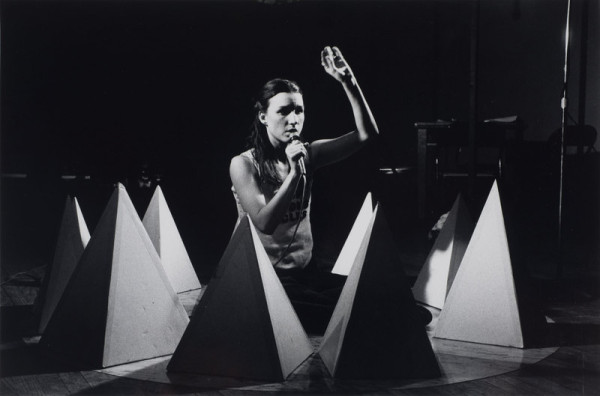 Jill Kroesen, The Original Lou and Walter Story, performance at The Kitchen, December 21-23, 1978. Courtesy the artist. Photograph by Robert Alexander

Jill Kroesen sits in a circle of pyramids and tells a story. Videos like this made me think about how performance is like a precursor to our current YouTube culture of self-dramatization. I am not sure if this lends any significance to a performance like this, but both can be equally uncomfortable/difficult to digest. 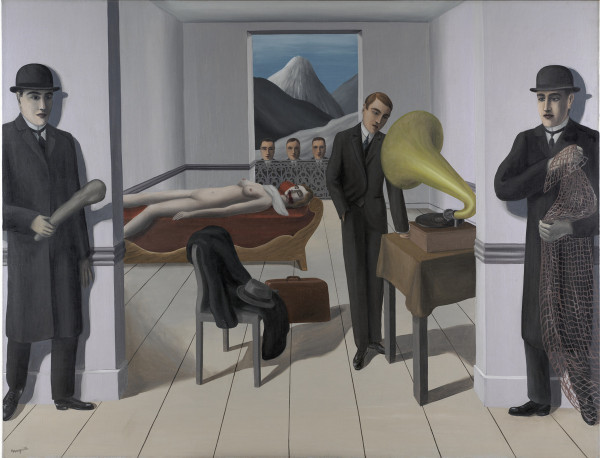 Despite an insane crowd, I liked this exhibition quite a bit because of the opportunity to see some of Magritte’s earlier work that feels fresh because of its simplicity and eccentricity. It is also a nice opportunity to see a lot of work by such an influential painter and sort out what you do/don’t like. I prefer some of the simpler work that relies on one or two elements awry. The above image is a little bit of an exception as one of the more narrative-based and theatrical inspired by Magritte’s love of the pre-World War I popular crime fiction series Fantômas. This show will travel to the Menil, so Houstonians will be lucky enough to see it soon. 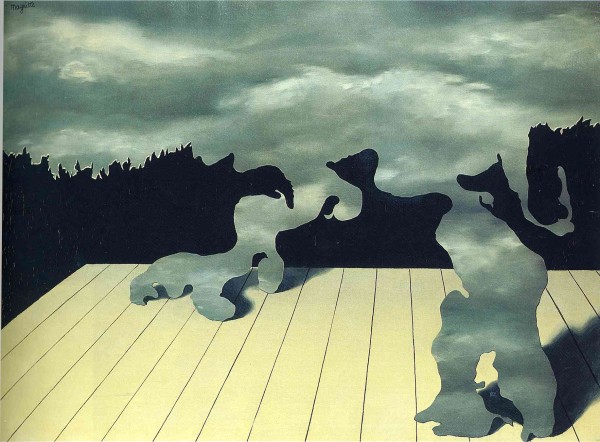 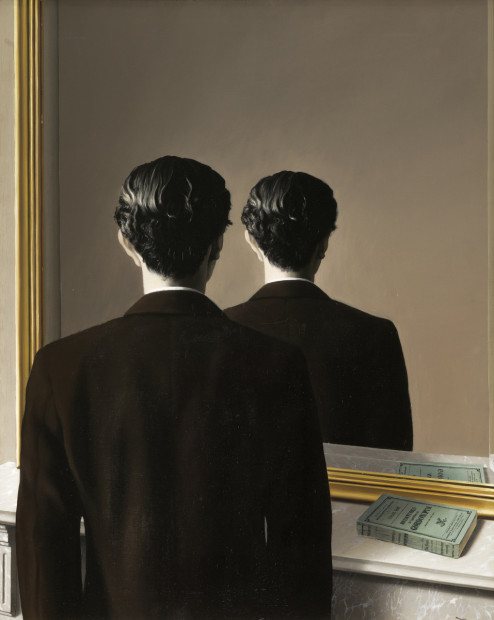 Here is a portrait commission for poet and patron Edward James where he looks in the mirror and only sees the back of his head. Who can see who? James cannot see himself and we cannot see James, so what are we seeing?