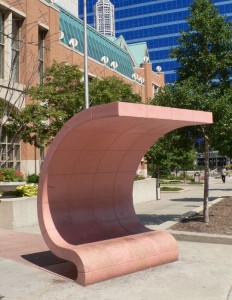 Jeanne Clair Van Ryzin of the Austin American Statesman reports that “The once subversive, renegade artist-turned-architect Vito Acconci” will create a public sculpture at the Consolidated Rental Car Facility at Austin-Bergstrom International Airport. She notes that Acconci did a similar project in 1998 at Milwaukee’s Midwest Airlines Center which she called “a strangely bland and mundane series of covered concrete benches. Let’s hope Acconci does something more exciting for Austin.”