Dueling Cabinets of Curiosities: the Menil and the MFAH

by Rainey Knudson May 15, 2015
FacebookTwitterEmail

The marvelous is always beautiful. – Surrealist Manifesto of 1924

In 1999, the Menil Collection opened an installation called Witnesses to a Surrealist Vision, and introduced to most Houstonians (myself included) the concept of the wunderkammer, or cabinet of curiosities. The Menil’s intimate room, which remains on view today, is a collection of odd and exotic, mostly anthropological objects that were inspired by the collections of Surrealist artists.

Cabinets of curiosities are a centuries-old idea of collection and display that presents objects—extraordinary, finely or strangely wrought, possibly taboo, and ultimately mysterious—for the pleasure and wonder of the viewer. The concept goes back to the Renaissance, when elites would collect “amazing” objects, both man-made and natural, in a kind of proto-scientific, aesthetic fetishization of the material world. 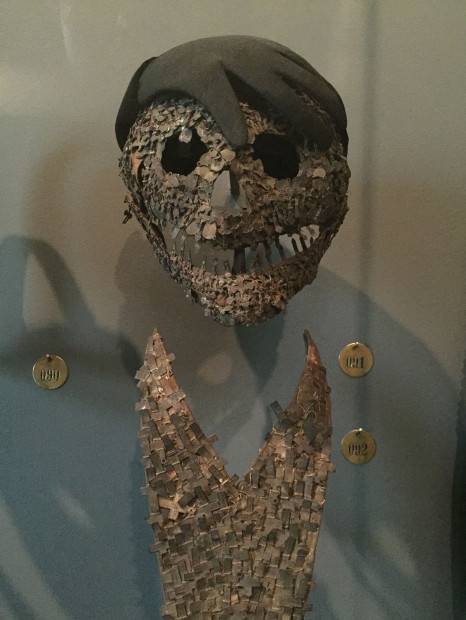 A Child’s Death Mask with Collar from France, late 19th or early 20th century. Lady’s Hat in the Shape of a Hand, late 1940s, designed by Paulette.

In the years since the Menil opened Witnesses, a whole mythology about this particular installation has cropped up—that some of the objects in it actually belonged to the Surrealist André Breton himself; and that the room is a recreation of the office of the curator Ted Carpenter, who was the guiding force for Witnesses and who died in 2011. I asked Paul Davis, the current curator of collections at the Menil, whether he could confirm these apocryphal stories, and it seems Witnesses begets its own mysteries:

Your question—what objects in Witnesses did Surrealist artists own—is one that I’ve been trying to nail down for myself. This mythic fact is rather pertinent to me right now… it’s very likely Breton possessed some of the objects at some point and that this information was not noted or recorded, but transmitted through oral history.

Davis’s response reads like a passage from Lawrence Weschler’s seminal book Mr. Wilson’s Cabinet of Wonder, about the Museum of Jurassic Technology in Los Angeles, a truly wonderful, latter-day cabinet of curiosities-cum-P.T. Barnum’s Museum. It begs the question of what is real, what is imaginary, and what the difference is in the Menil’s little wunderkammer. 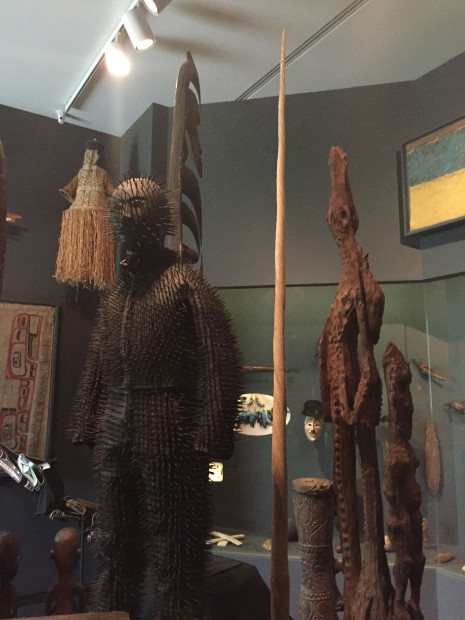 Installation view of Witnesses to a Surrealist Vision.

While there was a strong emphasis in earlier cabinets of curiosities on natural history and antiquities, there was also a lot of mythologizing and outright leg-pulling going on. This exploitation of the viewers’ credulity is represented at the Menil by a slender, very long narwhal tusk, which would have been presented back in the day as a unicorn horn. Perhaps much of the intention and details about Witnesses has been lost permanently, and maybe that is the best and only logical outcome for a room meant as an homage to the Surrealists. But I suspect—I hope—that there are other mysteries and jokes hidden in Witnesses. It would be a shame if they were already lost to history.

While I could easily imagine an earlier generation at the Menil to be capable of pulling the audience’s leg, it’s harder to believe the same thing of the rather humorless Museum of Fine Arts, Houston. It turns out they have their own cabinet of curiosities. Last year, I wandered upstairs at the MFAH’s Beck building into a small gallery, which I recognized as another wunderkammer in our midst.

Panoramic view of the MFAH cabinet of curiosities

Whereas the Menil’s installation is specifically about the Surrealists, and mostly includes objects designed for ritualistic use by tribal peoples, the MFAH’s version is about densely hung European paintings, with a few vitrines of carefully selected objects and books. I asked the curator, the charming James Clifton, if he was engaging in any leg-pulling at the MFAH, and he laughed and admitted that one of the books, a Royal Society catalog from 1681, was opened to a page titled “Skin on ye Buttock of a Rhinoceros.” Another book, titled “The Microscope Made Easy,” Clifton described as “Microscopes for Dummies in 1744.” He also shared that the natural objects on view—shells, mostly—came from Ebay, and went on to say:

The puffer fish (or, perhaps as I should call it as a museum object, The Puffer Fish) also came from eBay: $4.95 (plus $5.00 shipping). Thanks to my profound knowledge of natural history, I realized after careful consideration that its plastic googly eyes weren’t original, and we had them removed by the fine conservation staff here at the MFAH. The MFAH’s mountmaker, Frances Trahan, crafted a beautiful mount for the fish; she can make anything look like a work of art. 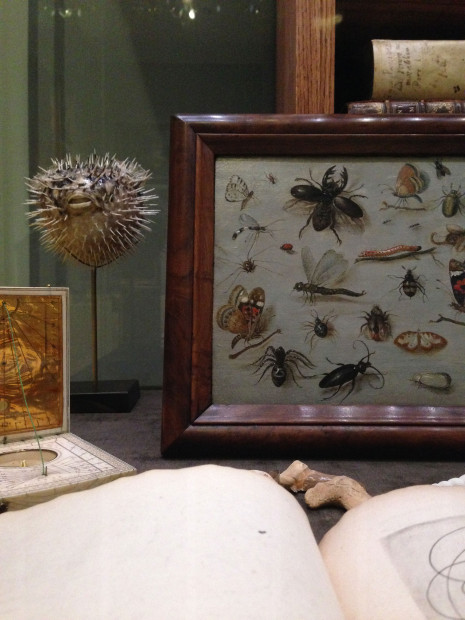 The elevation of a humble fish carcass through the fussiness of museum display seems like a good wunderkammerish joke, but Clifton assured me that all the man-made objects in the room are presented authentically for what he believes them to be. The rest of the gallery involves a few antique scientific instruments and other fancy geegaws, an impressive ebony portable altar, and several very remarkable paintings, including two 16th-century portraits I’d give my right arm to own. It’s a pleasure to study the room. Clifton told me that three years ago, he took the labels off the walls and hung the paintings more closely, in order to more accurately resemble the cabinet of a gentleman collector of the 18th century.* 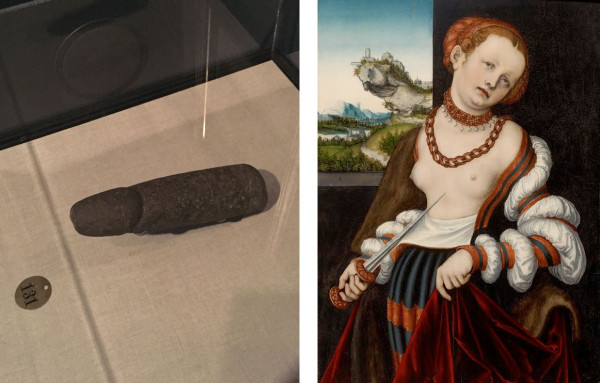 Is that an outcropping or are you just happy to see me? (left): Pestle in the Form of a Phallus, 3rd millennium BC, from Witnesses to a Surrealist Vision; (right): Lucas Cranach the Elder, The Suicide of Lucretia, 1529, Oil on panel, 29.5 x 21.25 inches. Collection of the Sarah Campbell Blaffer Foundation.

When the Menil’s wunderkammer opened back in 1999, I remember one sophisticated Houston collector commenting that it was far too tidy and sterile – that a true wunderkammer would be more dense and disorganized, inviting exploration rather than polite observation.

The cabinets of curiosities at the MFAH and Menil Collection, while quite different, are both historical reenactments that only hint at the gorgeous messiness of a true wunderkammer. Their objects are for the most part protected from viewer interaction. André Breton’s collection would have been far more haphazard, and an 18th-century European prince’s cabinet would have been far more intimate.

Put a bird on it: (left): Tableau of Bird Specimens from the Menil Collection; (right): Willem van Aelst, A Still Life of Game and a Blue Velvet Game Bag on a Marble Ledge, c. 1665. Oil on canvas, 26.5 x 21.25 inches. Collection of the Sarah Campbell Blaffer Foundation.

Indeed, the wunderkammers we experience in museums today are less about the objects they contain, and are more exhibits about exhibiting, displays about display: “This is how it used to be done.” Imagine moving from a cabinet of curiosities in a museum today to the next room, which we might call the Gagosian-style hang: “Here is our intimate little cabinet of curiosities, very 17th century; and here is our Gagosian room, where your individuality can be subsumed by the vastness of empty space between the oversized abstract paintings. This is what they did in the 20th century.”

Perhaps as a reaction to the minimal aesthetic in contemporary art galleries, cabinets of curiosities have today become all the rage. They seem to be everywhere: there are conferences dedicated to them; popular video games like Minecraft incorporate collecting and display; and a researcher named Robert Gehl even describes YouTube as a modern-day wunderkammer, although I’m not sure I agree with him. The crafty site Pinterest is awash in photographs of cabinets of curiosities, and—here’s the kicker—Houston’s own Museum of Natural Science, a stone’s throw from the MFAH, has an entire section in its gift shop dedicated to selling mass-produced “curious” objects for the aspiring steampunker who wants to assemble a little display of fake antique medicine bottles and fake animal skulls at home. 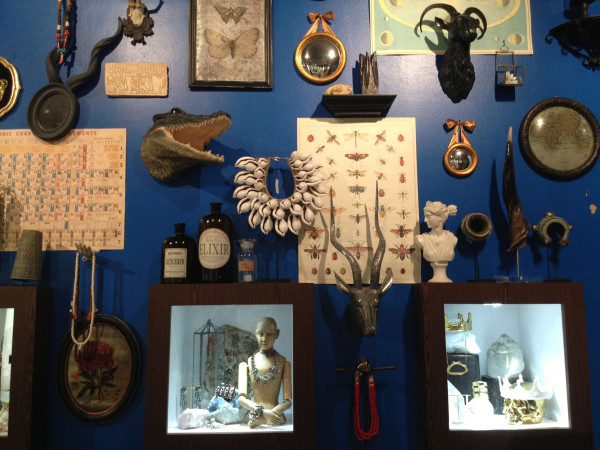 What is to explain this phenomenon? What explains the allure and pleasure of exotic objects, even when they are fussily presented in a museum setting, or mass-produced and sterilized of any true mystery?

Partly, of course, it’s a desire for the authentic and handmade, and comes out of the same impulse that’s driving craft (and local food movements) all over America. But I also think it reflects an anxiety that the very notion of “exotic” is disappearing from our world.

There’s an evolutionary compulsion for human beings to seek out the Other. Whenever we bump up against the barrier of knowledge and wonder what lies beyond, we experience curiosity, which is fundamental to our species. Perhaps the appeal of cabinets of curiosities can be explained by the fact that people seek totems from outside their own tribe as a tangible confirmation that there is something larger than themselves. The objects typically contained by wunderkammeren—strange, fantastic and mysterious—are stand-ins for the ultimate unknowable. And that is a subject we never tire of. 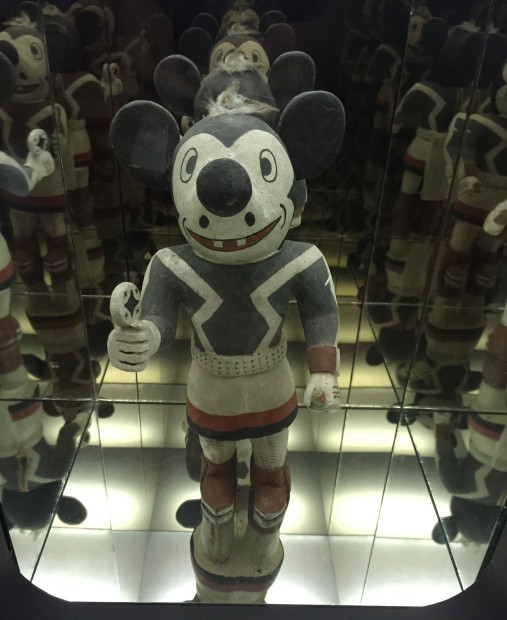 Mickey Mouse Kachina, c. 1950, from the Hopi tribe in Arizona. From Witnesses to a Surrealist Vision.

* [Perhaps the most remarkable fact about the MFAH’s cabinet of curiosities is that it isn’t the MFAH’s at all—all the objects in the room, and indeed in the adjacent galleries, belong to something called the Sarah Campbell Blaffer Foundation, a fully separate institution with an elaborate long-term agreement to house its works in the MFAH. Apparently, when the MFAH wants to borrow a Blaffer Foundation piece for a gallery a hundred feet away, a loan agreement must be signed, as if it were borrowing from an institution in another city. This highly unusual arrangement, wherein the Blaffer Foundation would technically have the right to pack up its belongings and leave someday when its lease is up, is a subject I’d like to return to another day.]

Rainey–next time you are in town, come by and visit my cabinet of curiosities. I have a whole studio filled with incredible specimens!