After a two-year battle with cancer, artist Melesio “Mel” Casas died at home on Sunday. Grace Casas, his wife of 35 years, told the San Antonio Express-News that he was surrounded by family. Mel Casas is best known for his humorous, political works and was considered one of the elder statesmen of the Chicano movement of the 1960s and 1970s.

Casas was born in El Paso, Texas, on November 24, 1929. He joined the army after high school and fought in the Korean War (1950–53), during which he was injured. He returned to the states and attended Texas Western (now the University of Texas–El Paso), where he earned his BA and completed his MFA from the University of the Americas in Mexico. Casas was professor emeritus at San Antonio College, where he taught for 29 years before retiring as chairman of the art department in 1990.

In the early ’60s, he helped found the Chicano art group Con Safo at a time when Chicano art was not being shown at mainstream venues. Until very recently, Casas painted tirelessly throughout the decades. In 2012, the Smithsonian purchased its second work by Casas, Humanscape 62 (Brownies of the Southwest). He has had a number of solo exhibitions, including one earlier this year at San Antonio College, entitled Mel Casas: Artist as Cultural Adjuster. A book by the same title by art historian Nancy L. Kelker was published last year. 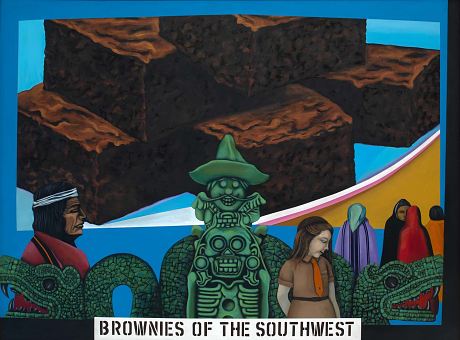