I would make a joke about the “Dog Days of Summer,” but I take this issue too seriously 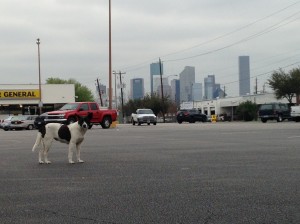 In a bid to raise awareness of the city’s overwhelming stray and neglected dog population, Houston’s DiverseWorks has teamed up with two other non-profits, Barrio Dogs, Inc. and Box 13 ArtSpace, to create a community-based photography enterprise they’re calling No One’s Dog: A Community Art Project.

The initiative calls on Houston residents to document abandoned, overlooked, and suffering dogs (and cats!) around city neighborhoods and upload the photographs to a Flickr group page. Selected photos that have been submitted by July 8 will be included in an exhibition at DiverseWorks that opens with a public reception on July 26 and runs through August 9.

Photos are already filing in to Flickr (I’ll personally lose sleep tonight over the photo showing a chained dog with a inward-spiked collar so tight it’s buried in his skin); this is a smart way to get people invested in a situation they may have otherwise overlooked, or to give them an outlet to illuminate scenes that have troubled them for ages.

DiverseWorks has sweetened the deal by asking Houston artist Michael Bise to create a coloring book “documenting the plight of Barrio Dog Rusty – who was found as a stray and is now one of Barrio Dogs’ greatest success stories.” They also promise that Bise and Rusty the dog will be at the opening, which is cool.

I think this is a FANTASTIC idea/ collaboration that will will bring much needed attention to those forgotten animals that need so much help!!