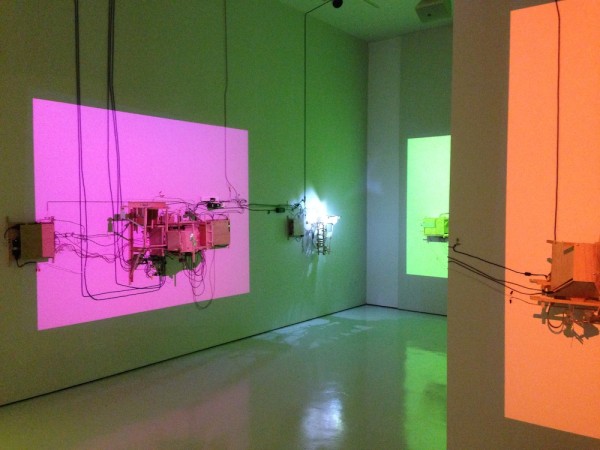 Trailer at McClain Gallery is Shore and Fisher’s most complex piece to date, so intricate and immersive that its techie magic overwhelms cavils about the piece’s unformed narrative, its schizophrenic intent, and its willingness to settle for funhouse effects. Pasted together from snippets of sound, video and technology, the piece is a loosely structured series of live video vignettes held together by Jon Fisher’s soundtrack. A rambling, entertaining string of experiments in low-budget audio animatronics, and the duo’s first storyboarded piece, Trailer ends up pointing out more exciting new avenues for Shore and Fisher’s work than it fulfills. 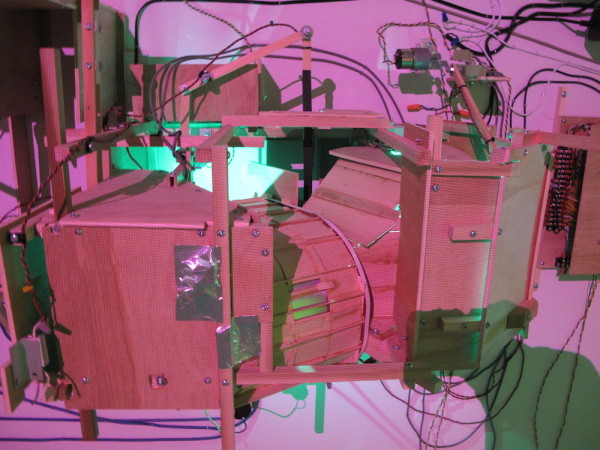 Exterior of the trailer mechanism, detail 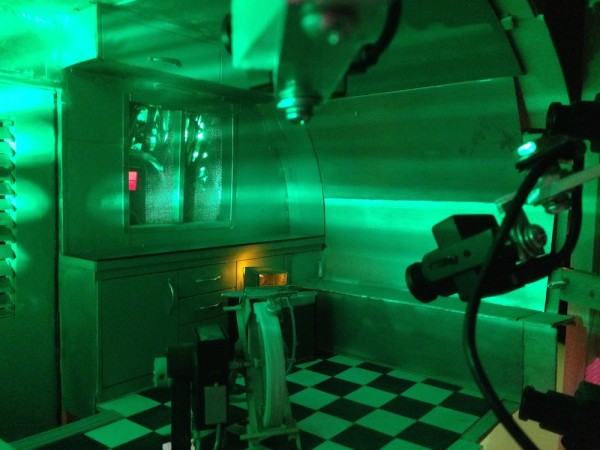 Like many new-media or trans-media works, Shore and Fisher’s carnival of light operates by splitting the opposition. The moody, but inconclusive narrative video the piece creates and projects onto the gallery wall isn’t gripping, but viewers are going to spend more time peering at the mechanisms that create it than in watching the video itself, let alone analyzing it. Conversely, the mechanisms don’t have to be particularly expressive themselves, and they’re not. Constructed like baroque po-mo architectural models, trailing a spaghetti warehouse of wiring, they have delegated their expressive function to the video you’re not watching. It works. The conglomerate experience of Trailer is fascinating and delightful.

In the show’s anteroom, a pair of one-off mechanisms act as a primer for the main installation. Tracing wires and features on the first piece I encountered, I located the red button—pushing it actuated the sound, light and movement part of the piece. An eerie blue glow illuminated a little plywood-and-wire contraption inside a transparent tube that unfolded slowly like a blossoming flower, accompanied by a swelling ambient soundtrack.

Unlike the frenetic, absurdist jerkiness of Jean Tinguely’s machines, or the deadpan gestures of motorized constructivist abstractions (perhaps even funnier for their hyper-seriousness), Trailer revels in clockwork musical storytelling, like a miniaturized latter-day carillon. From Disney’s Enchanted Tiki Room to Chuck E. Cheese’s Pizza Time Theater, the combination of sound and movement produced through intricate mechanisms still can surprise and delight the most jaded viewer, even though these kinds of effects are becoming more commonplace with the tsunami of cheap components, and vastly more complex and subtle with the advent of computer control. Judged against commercial applications of these technologies, Shore and Fisher’s piece is makeshift junk, a fact accepted and dismissed by the piece’s blatantly ad-hoc manufacture. Wires are exposed; plywood panels are left unfinished precisely in recognition of the fact that Shore and Fisher’s piece isn’t in competition with seamless commercial products.

Machines make wooden actors so, as with dinner theater, Trailer relies on music and lighting to provide atmosphere. In its dormant state, Trailer consists of several painting-sized rectangles of colored light, projected onto sprawling wall-mounted mechanisms that could be anyone’s telephone network interface. Activated, the mechanisms produce, live, an eleven-minute music video, each contributing a vignette filmed inside a miniature TV studio, all coordinated with Jon Fisher’s quirky soundtrack. 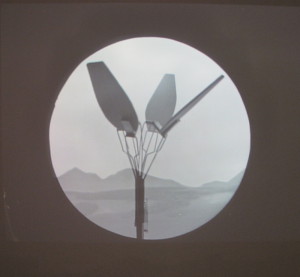 The video begins abruptly, with a sharp percussive beat. A spot of light dilates around an opening mechanical flower accompanied by rising swell of sound, immediately recalling Stanley Kubrick’s use of Thus Spake Zarathustra in the opening of 2001: A Space Odyssey. The video makes several other nods to film history–a lonely noir phone booth, and the eerie light playing through the window blinds from Steven Spielberg’s Close Encounters of the Third Kind.

The sound grows in complexity and volume as the piece morphs into a music video featuring vignettes of tiny horns and cymbals performing their mechanical duties. Eerie choral sequences and dramatic fanfares give way to cacophonous drumming and found-sound collage. Whirring insects and xylophone bells give some parts a haunted-carousel whimsy. Under it all, the mechanical clatters and snaps the various mechanisms produce as they perform continually remind you that you’re witnessing a live-action spectacle. At its climax, the piece’s miniature band breaks suddenly into a galloping klesmer performance redolent of sideshow tents as several previously dormant projectors light up the walls. The piece winds down with a slow rock dirge in a vacant nightclub. 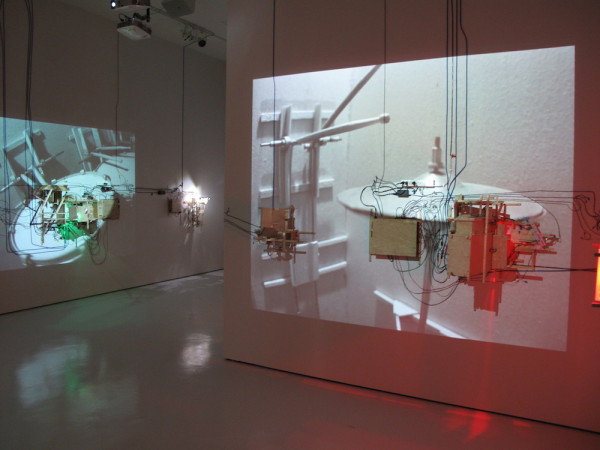 Fisher’s eleven-minute soundtrack pastes several flavors of music and sound into a medley that evokes different moods at different times, much like a film score. Listened to out of context, it seems arbitrarily changeful, but it works well as accompaniment for the video, driving the narrative of the piece and providing much of its emotional content.

It ought to be a vending machine. The piece’s eleven-minute show was easily worth a dollar the first time, and a second, but I doubt I’d splurge for a third. Like the candy machines and kiddy rides outside a grocery store, Shore and Fisher’s Trailer relies absolutely on novelty. But, while the novelty lasts, it’s fabulous.

Jeff Shore and Jon Fisher’s Trailer will be on view at McClain Gallery in Houston through May 31.