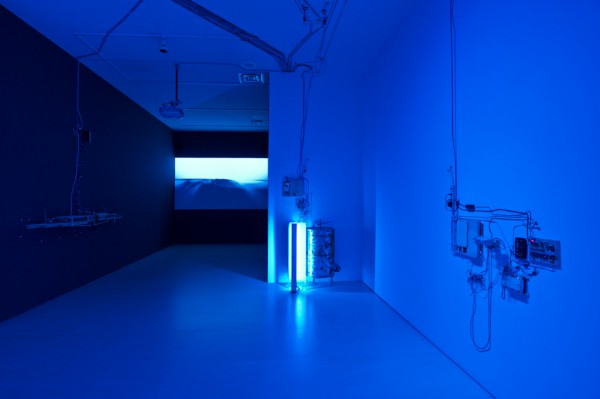 Walking into the dark gallery space, I found my attention drawn to the many different aspects of the installation. Wire-ridden sculptures with jittery moving parts cover three walls, while a fourth holds a projection screen with a murky film noir underway. 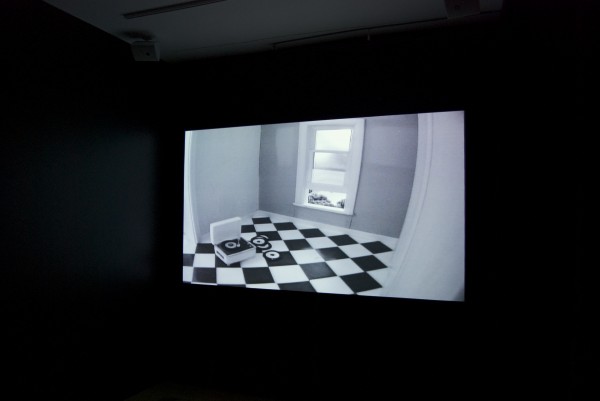 One sculpture tips a plate of sand, allowing the grains to slide from side to side. The machine that sifts the sand vibrates, adding to the ambient music. Indeed, it reminds us that vibration is a building block of music.

Reels and reeling abound in Reel to Reel: the shifting sands, a spinning apparatus akin to a printing cylinder, LPs rotating on makeshift turntables and of course the aspect of film. Reel to Reel comments on obsolete technologies, finding pleasure in the old, yet equally rendering them useless.

If some installations follow the mantra of “L’art pour l’art,” Reel to Reel seems to proclaim machinery for machinery’s sake, reveling in the clearly viewable operations of its functionality. The installation exists in the most complex of ways for the sheer joy of engineering. 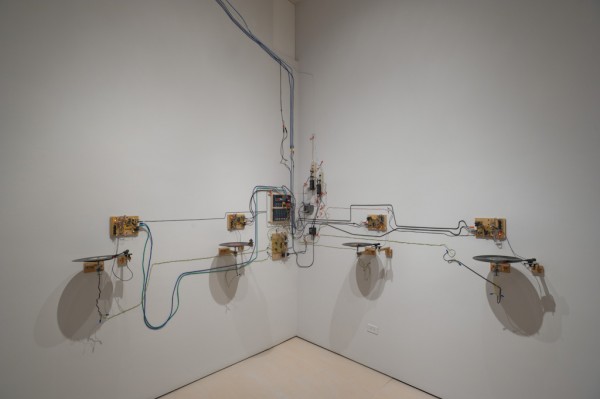 The strange Hitchcockian camera angles of the black-and-white film, capturing interior views that feel eerily familiar, cause the audience to examine each sculptural machine closer. And the highly observant are rewarded—each shot of the film is in fact live, coming from within the sculptural pieces, where 14 cameras are shooting small-scale interiors and reflections created by the seemingly purposeless machines.

Even the less diligent viewer can feel a strange continuity in Reel to Reel.  The tension-filled tonal music merges with a variety of music moments within each sculpture, from the technologic lap harp being plucked like a player-piano, to the old-school scratching of vinyl. Each small movement, noise and light is part of a symphony of engineering.

It seems odd, using such minute and exact technologies to create a work that feels so very convincingly vintage. Yet, inexplicably, that is also its biggest strength.

Amy Davis is an art writer and enthusiast living in Houston. She is a recent graduate of the Courtauld Institute of Art in London, England and currently interns at Christie’s, Houston.

This is an amazing installation. I watched the whole process three times and discovered something new with each viewing. Super cool Jeff and Jon!