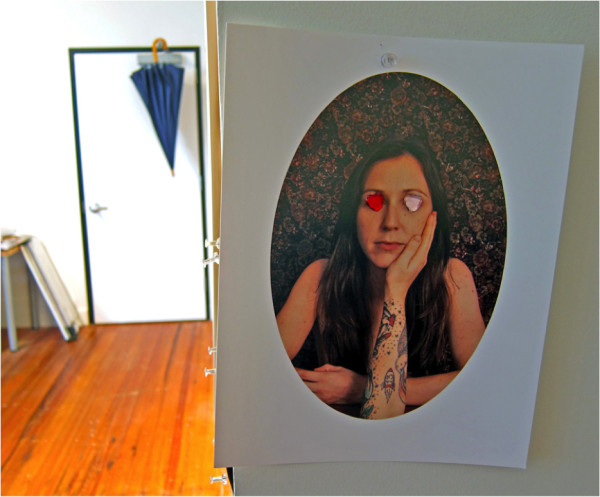 Little is more sacred than the moments spent at home being pissed off at your family. Most everyone has memories of early morning nagging, loud “discussions,” or even fantasizing about pulling a Macaulay Culkin and suing their parents. Yet, for most functioning adults, even these memories bring back a bitter fondness that arises from the vulnerability of family dynamics. Houston photographer Emily Peacock has a knack for being vulnerable and tough at the same time. Her work unapologetically reveals who she is and the result is a genuine view into her personal world. Peacock’s photography and video works give us a glimpse into her family struggles and humbly reminds us of our own. 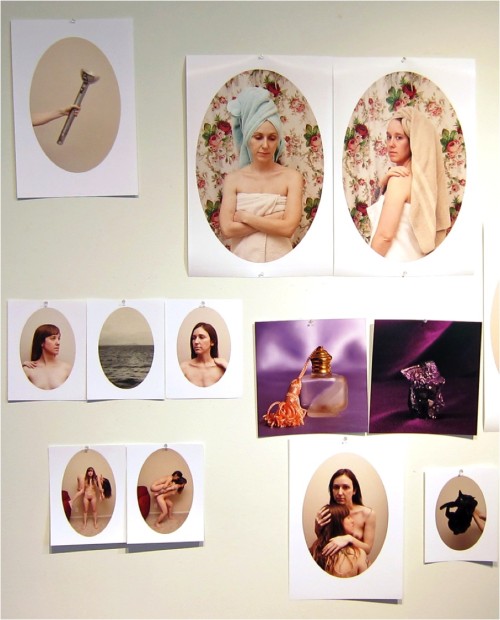 Currently Peacock is an artist in residence at Lawndale Art Center and also has an exhibit up at Aker Imaging called A Matter of Kinship. The photographs in this show were inspired by Peacock’s experience moving back in with her sister in a one-bedroom apartment. “We would argue about the same shit we did when we were kids and although it was frustrating, it was nice to be reminded of who I was and where I came from.” Referencing Victorian family photographs, Peacock frames her images in an alluring elongated oval. This choice is also a personal one, “My sister would always buy me old photographs and negatives for my birthday, I have a whole bunch of photographs of people I don’t know that she has given me.” 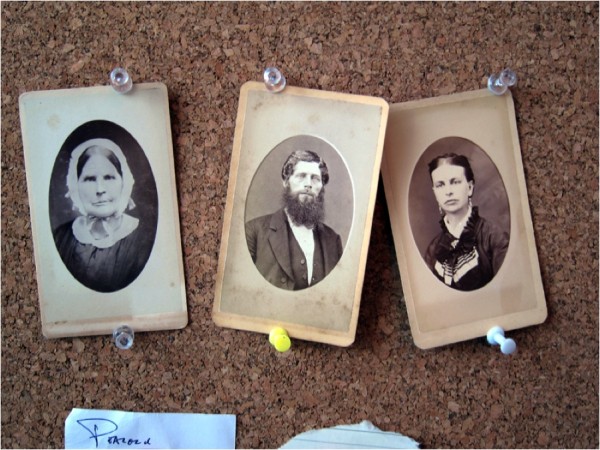 Birthday gifts pinned up in the studio 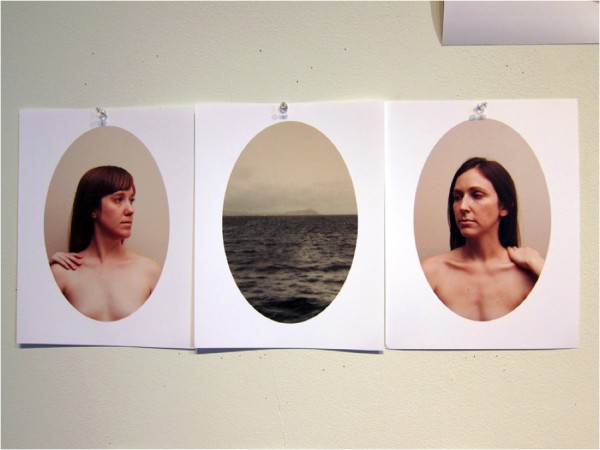 Family portrait. From left to right: Emily Peacock, a print of a vintage photo given to Emily as a gift, and Emily’s sister Sara Peacock.

Looking over all the images I asked if nudity referenced the vulnerability between family members. She agreed that the progression from completely nude to covered up coincided with the varying degrees of trust she and her sister shared. As many siblings who live together would understand, a brother or sister can be your best friend, your enemy, and sometimes seem like a complete stranger. 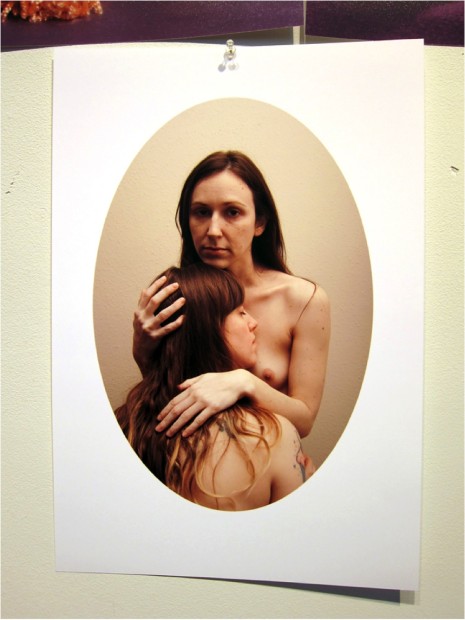 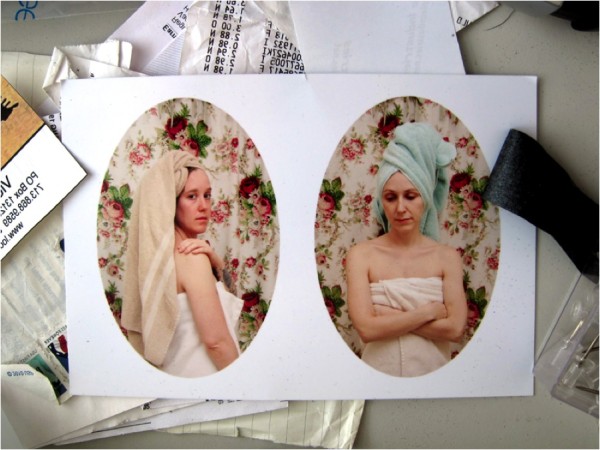 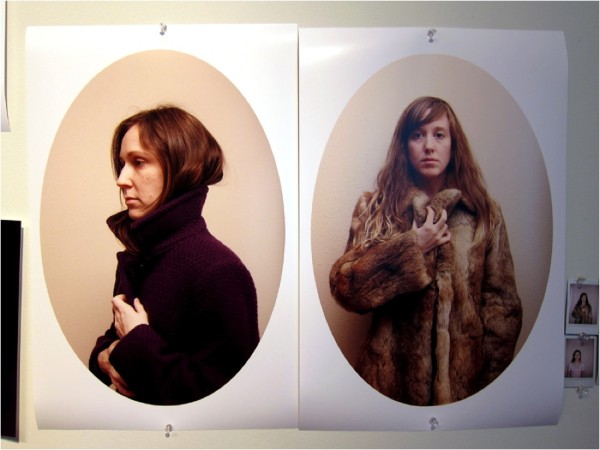 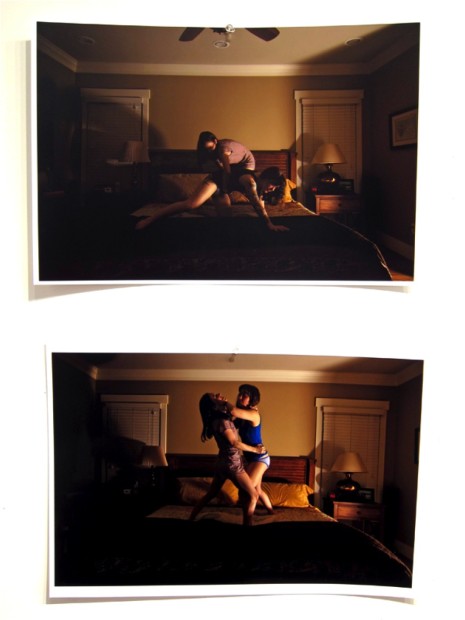 And sometimes you want to beat your sibling up…

In the two photographs above, Greco-roman wrestling and the history of the idealized figure in art inspired Peacock. She wanted to replicate the heroic nature of the sport while imbuing a reminiscent feel of kids playing at night in their parent’s house. 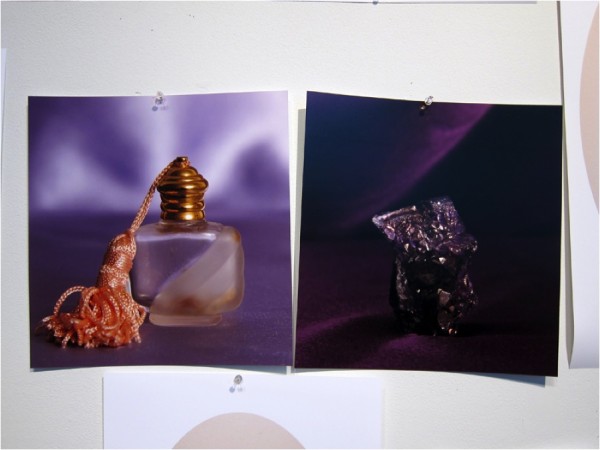 Part of her Kinship series are also images of objects that reference Peacock’s past with her sister: “Sara would collect perfume bottles and I would collect rocks—the objects are very telling of our personalities.” My favorite was a large flashlight being held aloft like an Olympic torch. Peacock explained that the image was a melding of family history and how she felt at that time in her life as she was surfacing from a divorce, “My dad used to give us flashlights when we moved out, like it was going to protect us you know?” She went on to say that the flashlight did feel like a metaphor for carrying a torch for a relationship that was important to her for so long. 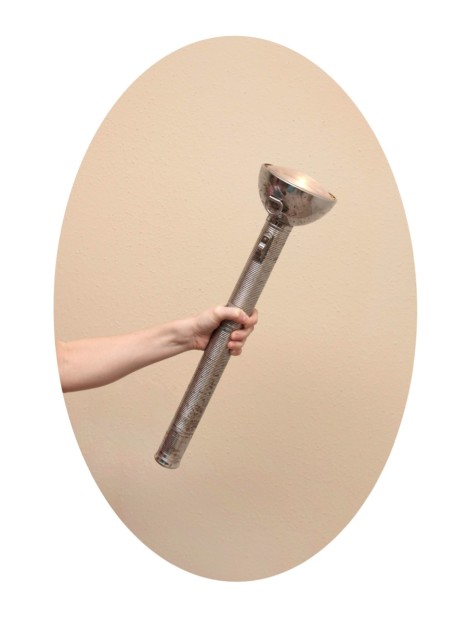 Another medium Peacock has worked with in this past year is video which she will be exhibiting in her artist residency show at Lawndale opening May 9th. In one of the videos she is working on, 6 x 18.78, she is carried like a toddler around a Houston Kroger. Referencing the dissolution of her marriage, she fearlessly addresses the feeling of going to the grocery store as a single person after many years of having a partner. The man holding her picks up items that she would usually buy for her ex-husband. The video is thoughtful and collapses emotions of sadness and bitter humor that are palpable after a break up. 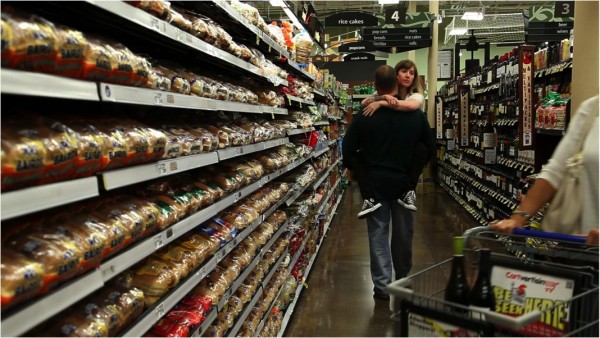 I asked what other works will be in the upcoming end-of-the-year residency exhibit at Lawndale Art Museum, and Peacock showed me some photographs of quotidian objects set against a stark red and black blocks of color. 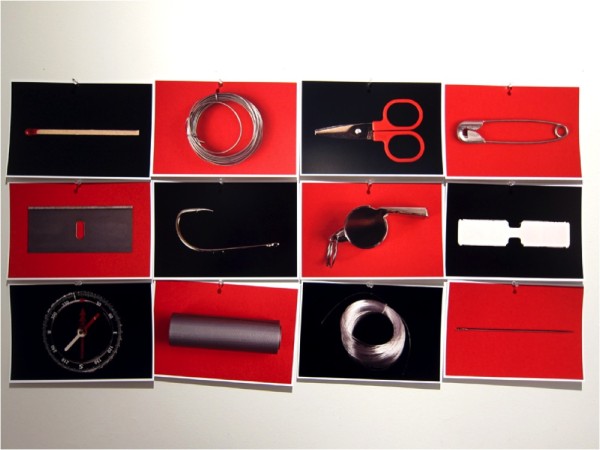 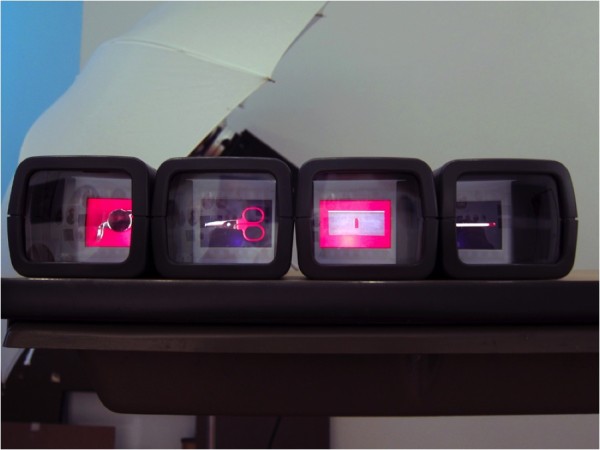 One object Peacock photographed that was particularly striking was a plastic wallet insert that would hold your family portraits. The photo is a minimal gesture that hints at the passing of sociocultural time in a poignant way. 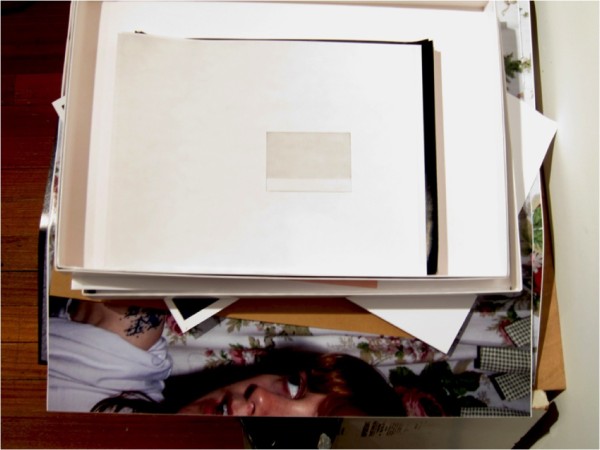 Of course when we want to show off our loved ones now we simply reach for our phone, but the conversation Peacock engenders is an interesting one:

“I fell in love with the craft and history of photography. I miss prints because I always liked seeing what people think are significant. Me and my friends would buy disposable cameras before we went out and you couldn’t prescreen those, if you looked like shit, you just looked like shit!” 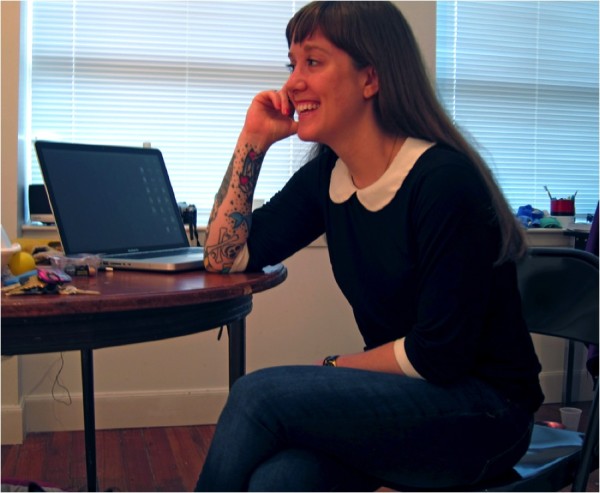 A candid photo in the Lawndale studio

Peacock explains that the instantaneous process of digital cameras has made photography less honest and direct. Although she admits that throughout photographic history images can and have been staged and altered there is a difference now that everyone can instantly process an image. You can see this anytime one of your friends raises a phone to take a photo. In less than three seconds everyone has their pose ready, a face that, in many ways, is not our own. 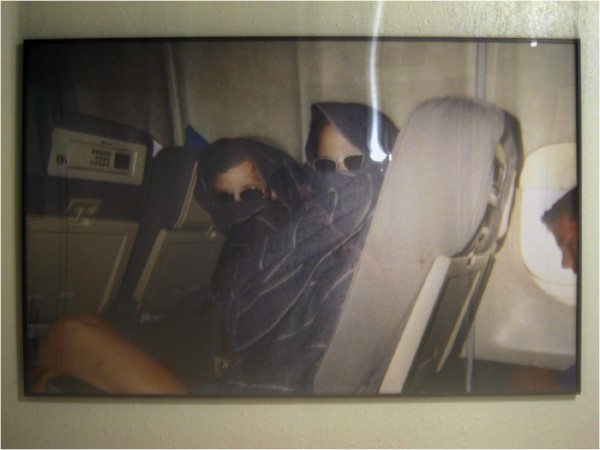 A snapshot taken on a plane right before 9/11 of Emily and her friend being goofy with an airline blanket. The large-scale photograph that hangs in her bedroom won Juror’s choice at Lawndale’s The Big Show in 2010

Emily Peacock now lives in her own place in Houston, Texas with her dog Waffles, a small terrier mix with a personality similar in veracity and genuine excitement to her owner’s. 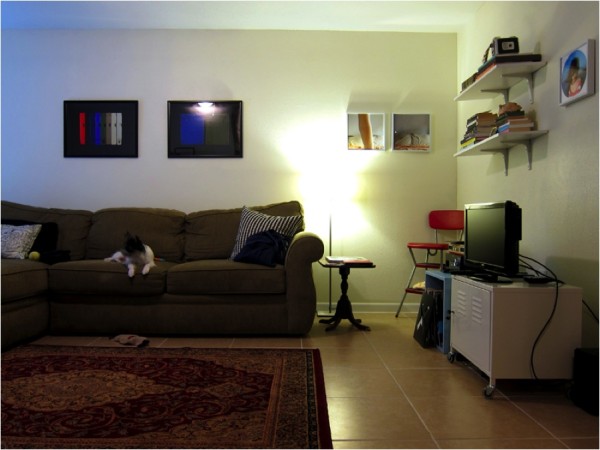 Waffles lounging on the couch underneath. Photographs by fellow Glasstire contributor Peter Lucas

Her home, like her studio, is stark but not lacking in generosity or warmth. Like her artwork, Peacock has pared down her world to what sticks, what matters, and what she knows is true. 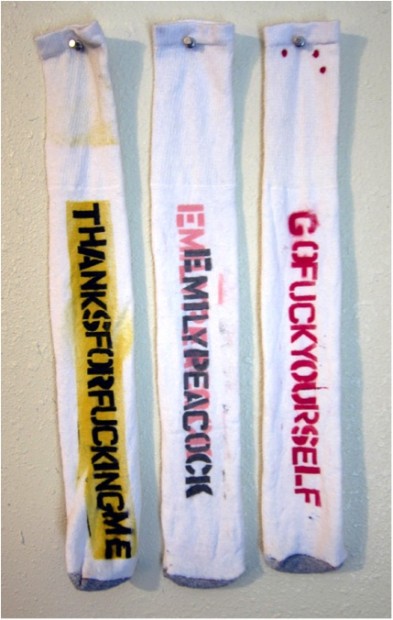 Work by Jim Nolan greets you by the front door 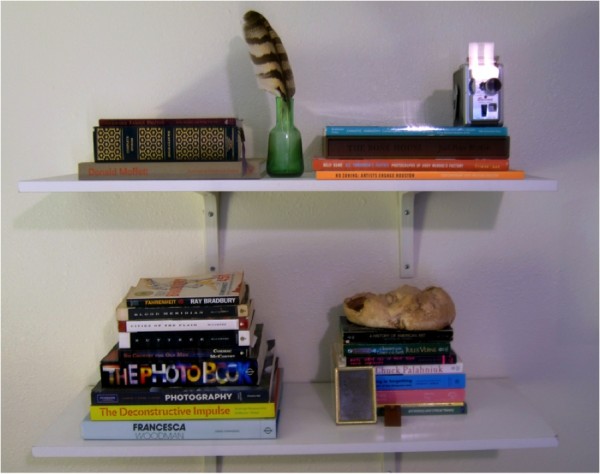 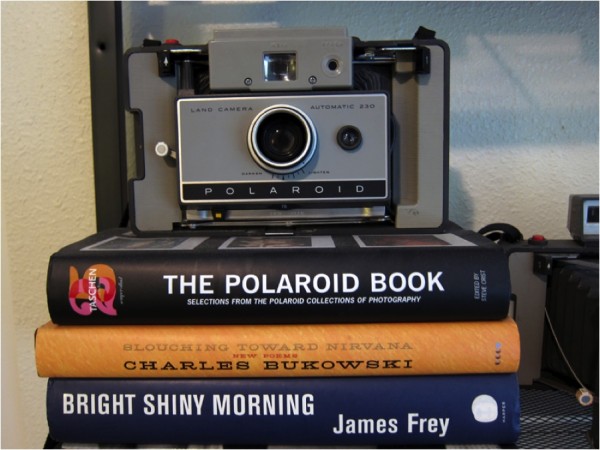 Bukowski and a Polaroid camera

Thanks to Emily and Waffles for sharing their studio and home.

Emily Peacock’s A Matter of Kinship will be on view until May 2 at Aker Imaging in Houston, Texas. To see more of her work visit her website. 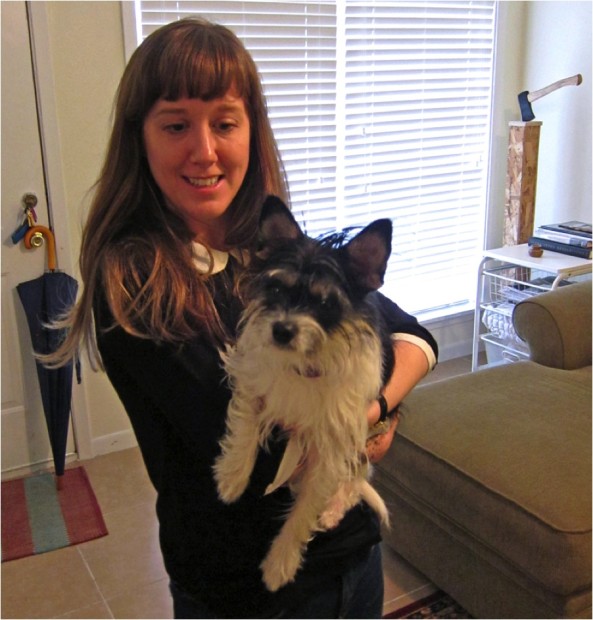 Why thank you Joel, that means a lot!

I am a big fan too. I also collect old photographs and I love Emily’s take on them – even though her’s are obviously very modern, they still have the same essence and emotional draw as the Victorian ones.

Peacock rocks. Waffles is a pretty bad dog though.