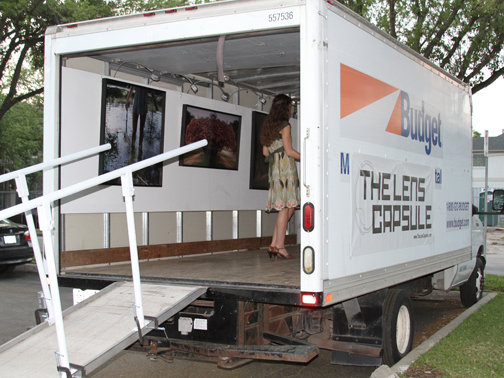 The FotoFest biennial celebration of photography has begun again; weekend before last Lawndale, G Gallery, and the Lens Capsule opened the season. That’s not exactly all that spurred this missive, rather it was the Artist’s Town Hall the week before that.

I did not attend the meeting, but I have talked with participants and one of the moderators. Over the years this sort of thing has reoccurred with distressing regularity. Alternately, there is an aghast response from the community outside of the art-producing arena in the way the art business is run and equally aghast admissions from members of the art-producing corps that gallery people they entrusted with friends and colleagues were less than honest in their dealings. Examples abound and it isn’t always neophytes who are victimized; the recent revelations about a prominent gallery closing without payment or return of work to the artists affected young and old, local and national.

But such meetings usually are about younger or under-represented artists wanting access to the “system.” Somehow this will bring fame, fortune, &/or better sex.

Our esteemed editor proposed six questions that the meeting should address, I would add a couple more:

1. If, during your education, someone told you that doing good work would be enough to guarantee success, you have been cheated and lied to. Of course, you should make the best art you are capable of making, but in the longer run, every one will make competent enough work to generate commerce at some level if they work hard. Good, or even great, art does not guarantee success. Instead some effort must be made to make yourself, and probably more importantly you and your friends, visible in the wider art-world.

What the system has that you don’t is a better Rolodex (an antiquated technology, but appropriate to this context). Who they know versus who you know is a matter of dollars. Everyone knows a few people who have the inclination and resources to support art; share your Rolodex and share your friend’s Rolodexes, too; further, share them outside of your closely held acquaintances.

It’s a shameful fact that Houston has very few collectors who collect in depth, if they have one of your pieces the chances are good that they will never buy another, but they may buy something from your friends or neighbors if they knew of them. I have very good friends who would never in their wildest dreams share their mailing list, even though they likely will never sell another piece to them. It will take a change in the culture of the art world producers to wrest access control from the system.

2. The part of the “system” you do have control of is your own activity. What have you done lately? Been to any openings? Without getting drunk & disorderly? Some of the best known artists, locally and nationally, have stunted their careers by acting like assholes in public.  I’m not sure what causes this, but whatever it is, get over it. Being able to carry on a conversation is a wonderful means of meeting and impressing people at events, collectors and/or the system. When at a loss for words, ask a question.

3. Can’t get someone else to show your work? To quote Mickey Rooney as Andy Hardy (another antiquated reference), “Hey kids, let’s have a show.” Gather your friends whose work you actually admire, pool your resources, and rent space in a vacant strip mall for a month, the property manager will love having the activity. It doesn’t have to be open 24/7, an evening each week and Saturday, with a notice on the door for an appointment will suffice. This is where sharing a Rolodex comes in. Your Mom isn’t going to be your best collector in the future (even if she is right now); friends are wonderful, but if it’s only a party, it’s not going to be productive; you need fresh meat. Publicize! Facebook is cheap, but isn’t going to generate commerce. I’ll bet that Glasstire will list your event if you give them the information in proper form and in a timely manner, and so will other news organizations.

How many dealers or curators have you invited to your studio (a great excuse to clean it!)?

I finally get back to FotoFest. If you were at the Lawndale opening, you should have seen the rental truck in the parking lot; it contained an exhibit of truly young artists, students from the High School for the Visual and Performing Arts (HSPVA). As Art it was “young”, but not unsophisticated. These will be your colleagues in a few years, pay attention!

And, how in the world did they get one of the initial shows at the beginning of FotoFest? Because two women, Emily Peacock and Britt Thomas, put together a “kickstarter” campaign last FotoFest and began the Lens Capsule Gallery in the back of a rental truck. They both have other credentials, exhibits at Lawndale in the past and others too many to mention in spaces all over Houston; but what is important is that they actually did something, and for others rather than themselves, no excuses, no complaints.

Both women are lovely and talented and they arrived at a means to generate churn in the art system. Use  your vaunted creativity and you can do it, too, if you apply yourself.

You ask, “Is this going to help them?” I can only offer the anecdote that while I was there a gallery owner visited and waxed poetic about how it reminded her of the show in cargo containers at the Miami Art Fair. Will it ever translate into something else? I have no idea; however, she now knows them and when the HSPVA students show up at the gallery with a resume that includes a show in the Lens Capsule, she’ll think of them .

Does she know you?

The Lens Capsule will next appear at Houston Center for Photography this coming Friday, March 14th.