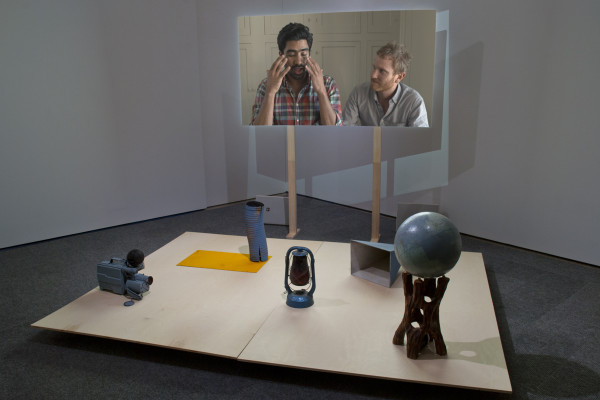 Entering Vishal Jugdeo‘s A Weight Dangles Above Your Head / A Shaky Picture Has No Weight, I walked into a conversation about the size of an undisclosed man’s penis.

Jugdeo’s installation at the Lora Reynolds Gallery in downtown Austin is worth sticking around for, if anything, for its unusual features. Even after watching it from beginning to end—and having context for the conversation about the man’s penis—I found myself curious but underwhelmed overall.

The 23-minute film is a quasi-documentary with footage taken in Guyana, the South American state where Jugdeo’s ancestors were taken as indentured servants in the 1800s. The film jumps between the footage Jugdeo collected there and and his reflections on it.

Like the Alexandra Grant exhibition also on view in the gallery, A Weight Dangles Above Your Head / A Shaky Picture Has No Weight deals with the formulation of identity, specifically through Jugdeo’s personal connections to the country. He is reflecting on the footage through conversation with a male who is assumed to be his romantic partner. Their conversation balances between Jugdeo building a boundary that protects him from vulnerability and his partner’s attempt to demolish it. This is illustrated through the footage of the conversation as well as the objects in front of the screen.

Although I understand and appreciate Jugdeo’s mission, I think its execution could have been tighter. Jugdeo’s attempt to keep his artistic integrity intact—partially scripted scenes, alternating between sources of sound and extended contemplation on seemingly arbitrary scenes—distracts rather than complements his personal exploration of identity. 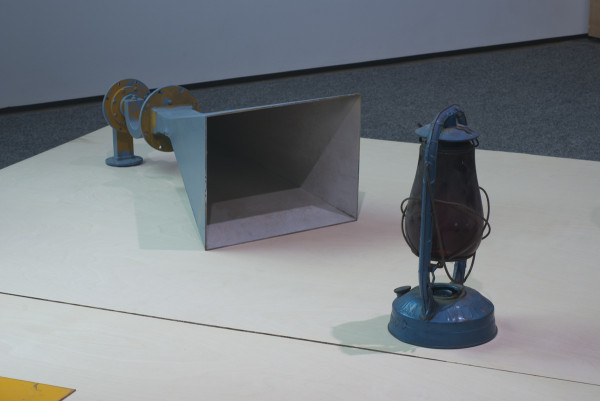 One aspect I particularly liked were the objects that complemented the film. Two of the five—a camera and a globe on a wooden structure—had speakers installed in them emitting the voices of Jugdeo and his partner. Jugdeo mentions in the film that the camera is his way of pressing people into their appropriate behavior while simultaneously breaking down the barriers they’ve created because they can look directly into the camera, not at him.

Regardless of the particulars, Jugdeo’s intentions in A Weight Dangles Above Your Head / A Shaky Picture Has No Weight are clear and honorable. The process of establishing personal identity is just that: personal. Although personal discovery may differ with the person, it doesn’t negate Jugdeo’s attempt at finding himself through his own work and the vulnerability that process entails. 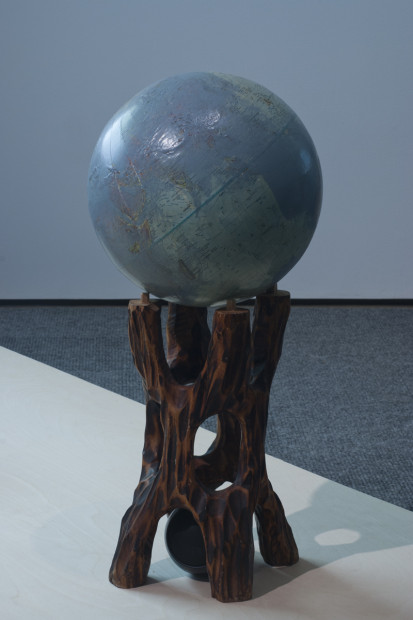 Vishal Jugdeo’s installation A Weight Dangles Above Your Head / A Shaky Picture Has No Weight is on view at Lora Reynolds Gallery through March 15th.