Gazing at Tom Molloy’s installation, currently on view at Lora Reynolds Gallery in Austin, one is quickly struck by the artist’s authoritative draftsmanship, as he employs meticulous cross-hatching and shading as adroitly as any Renaissance master.  Equally compelling, however, is his ability to quietly weave a narrative. 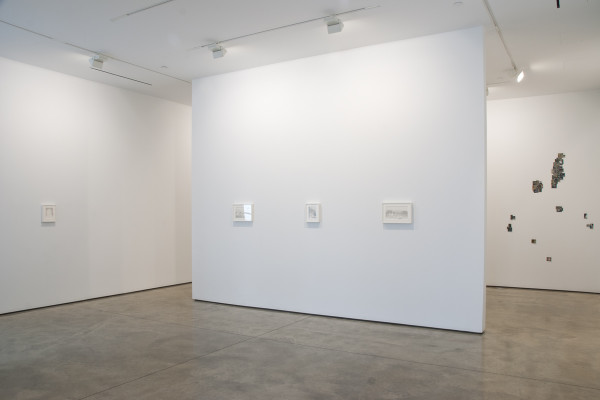 Molloy, who is Irish by birth, currently lives in northern France, and with this geographic coincidence I will draw a comparison with the storytelling technique of the author Émile Zola (1840-1902).

Through his passion for social reforms and his literary technique, Zola became a key figure in the political transformation of France, most famously with his twenty-novel Les Rougon-Macquart cycle (1871-1893).  He was a practitioner of the nascent naturalist literary style, which sought to depict human society and the lives of those who composed it objectively and truthfully – a departure from the emotionalism and sentimentality of romanticism.  Zola hoped that by painting a picture of things as they were, his work would serve as a mirror reflecting society’s image back on itself, and that this would awaken his contemporaries into pursuing the changes he longed for.  Molloy, who seems to share Zola’s hope for contemporary social reform by his choice of geopolitical subject matter, makes a similar appeal to us. 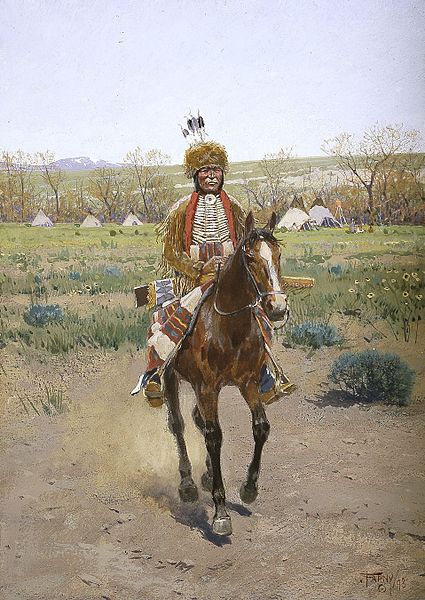 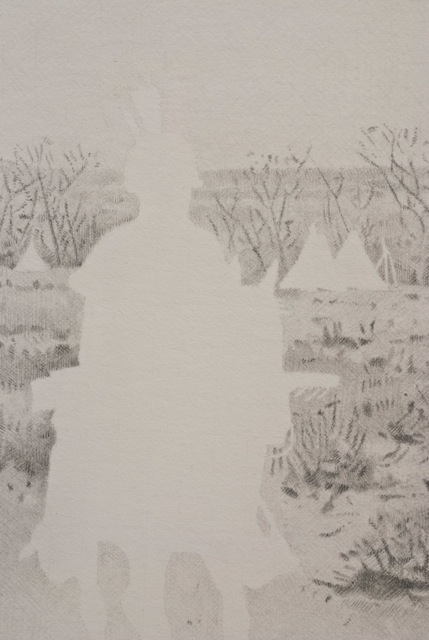 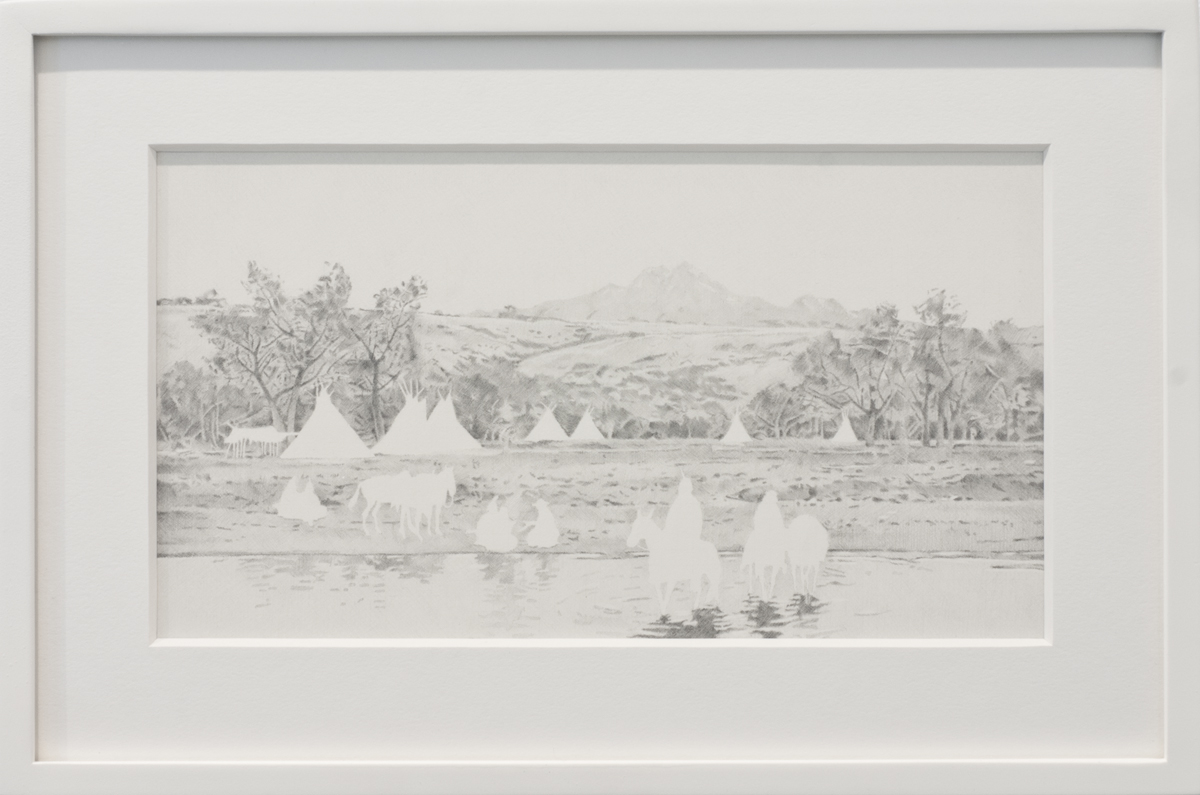 The main body of the exhibition is Native, a series of intimate drawings in graphite wherein Molloy repurposes realist paintings of Native Americans by Henry Farny (1847-1916).  By conspicuously omitting the subject of its original, leaving only silhouettes in a scrupulously drawn landscape, Molloy recalls the decades-long campaign to remove Native Americans from the American landscape.  Beginning with the infamous Indian Removal Act of 1830, which essentially sanctioned the ethnic cleansing of the south, tens of thousands of American Indians were forced to relocate, and many thousands died in the process.  The subject’s absence in each of Molloy’s drawings is a stark, albeit silent, commentary on the horror of ethnic cleansing, both in our history and in countless other examples throughout the world.

Citizen is a set of four self-portraits of the artist wearing a paper mask that transforms his identity into various unnamed persons of middle-eastern descent.  Upon learning these masks depict victims of US drone strikes, the images become spectral.  Although each paper simulacrum shows the victim smiling and at ease, they are all lost to history – casualties of the seemingly interminable US War on Terror. 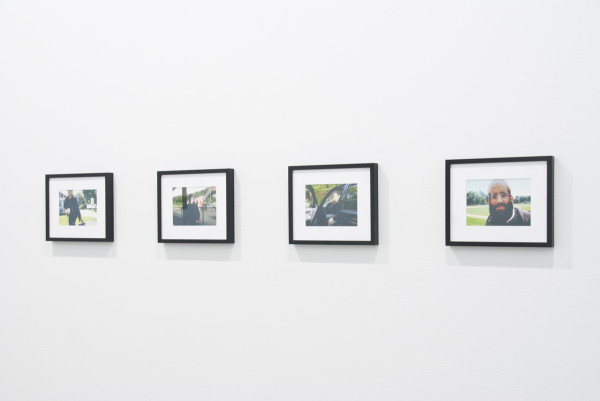 In Base, Molloy deftly calls attention to the vastness of American global hegemony by pinning 600 aerial photographs of US military bases – only a portion of what exists in reality – to one large wall of the gallery.  Since each are strategically placed as they would be on an actual world map, one can only marvel at the scale of our unrestrained attempt at global military dominance as it stretches to all corners of the map. 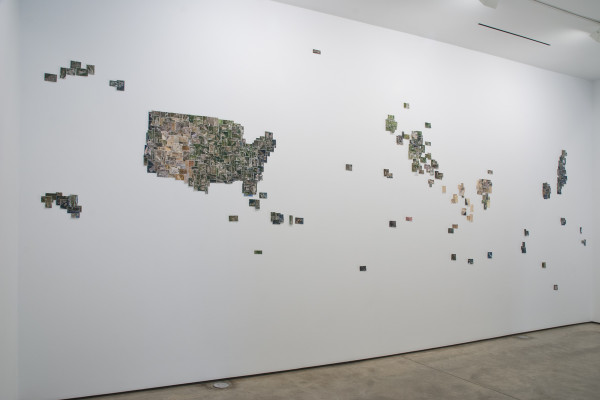 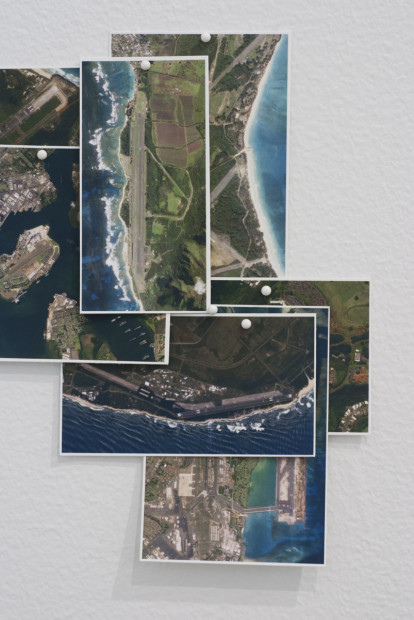 Molloy’s work, though incisive, is not polemical.  He quietly portrays a nation to his contemporaries, as did Zola, “that cannot restrain itself in its rush to possess all the good things that progress is making available.”  Molloy, also like Zola, clearly lays out the facts before us in hopes of nudging us into a moment of introspection.  In Zola’s cycle of novels, his protagonists were, as he said, ultimately “derailed by [their] own momentum.”  What remains to be seen is whether ours, too, will derail us.

Native is on view at Lora Reynolds Gallery in Austin through May 10, 2014.

Quotes are from Emile Zola regarding the genesis of Les Rougon-Macquart.

Terry Mahaffey is an independent writer living in Houston.  He received an MLA in Art History from the University of St. Thomas in 2010.
1 comment