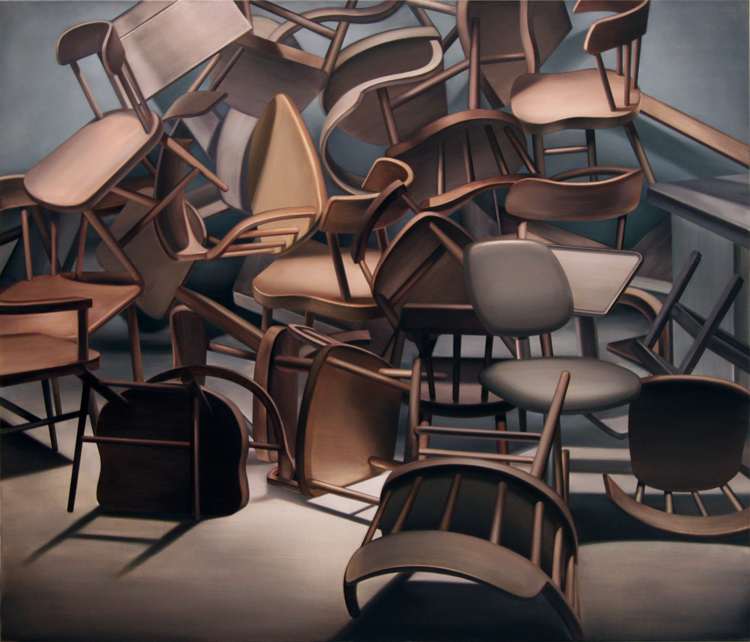 Carl Hammoud’s current exhibition of paintings and drawings at Lora Reynolds Gallery feels cool and empty. The works are also nearly impeccably installed. I recently told a friend that the show is “very Lora Reynolds”—it’s what I think of when I consider the aesthetic of Reynolds’ gallery—taut, skillful and concise. Of course, Reynolds sometimes strays, as we saw last year with Jim Torok’s exuberant and messy unframed paintings or Mads Lynnerup’s madcap take on group exercise. And while I liked these shows very much, it is in works by Tom Molloy, Ewan Gibbs and now Carl Hammoud that Reynolds has created a signature for her space.

This is Hammoud’s first show with the gallery and in muted tones of browns and greys he paints a kind of airless taxonomy of academia: a tumble of chairs, a blank book, an almost M.C. Escher image of a Greek classical staircase. There’s a creaminess to the paintings; the surfaces appear smooth and silky. A spotlight emits from some unknown source in the painting of chairs titled Diorama, creating fuzzy shadows on the neutral ground. 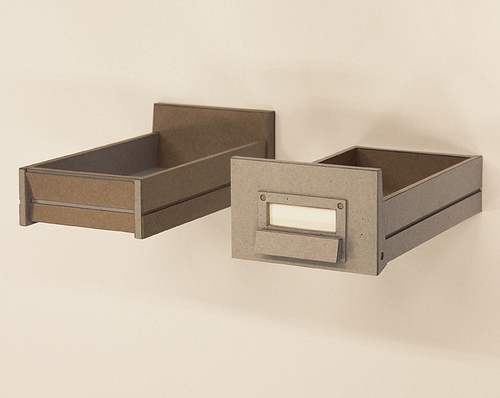 Hammoud’s photorealist drawings made with graphite and watercolor hang seamlessly next to the large paintings. It’s a feat to combine each medium, and the drawings, so tightly conceived, temper the paintings, creating a smallness and intimacy between the two. Tucked in and around the 2D works are paper sculptures of card catalog drawers. Taken out of context, the sculptures appear ghostly, representing outmoded and, perhaps, nostalgic forms of research. 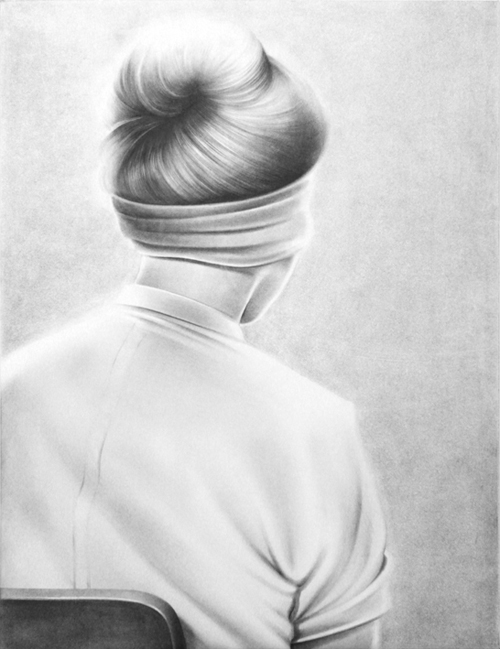 There are too many pieces in the show, which dilutes the strength of the works combined. I longed to do an edit while I was in the gallery. There is one terrific graphite drawing of a seated woman, hair in a bun, her back turned to us, a blindfold over her eyes. “How much stranger,” I thought, “would this show be if that was the only work on the wall.” As it is, another drawing is next to this one, presumably the same woman turned around, thumbing through a book; an empty notebook on a table. Hung alone, the image of the blindfolded woman would charge the entire show. The books and indices of academia, the fastidious approach to drawing, could take a menacing turn, a kind of S&M of higher learning or at least, a pleasant perversion of the Ivory Tower. 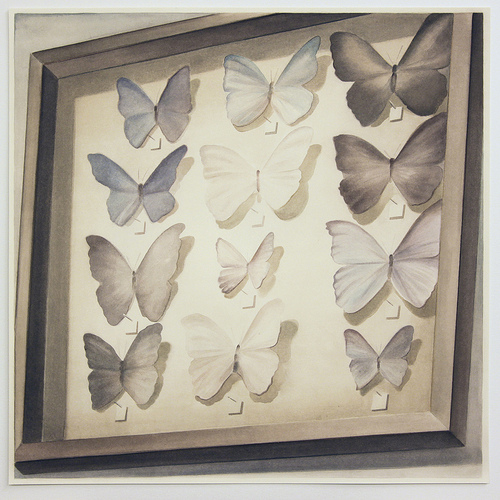 One sepia-toned watercolor of butterflies pinned in a box feels emblematic of the show and, perhaps, the aesthetic of Lora Reynolds Gallery in general. So carefully rendered, so mired in skill, that it sometimes feels musty and old fashioned. Too specific, the drawings and paintings appear dead in the imagination of the viewer. The works, like the butterflies, are staid, simply displayed as beautiful, dead objects.

This and That: M.C. Escher and Billy Hassell