Two Hums Make a Whole: DiverseWorks to Present Sound Performances in the Sky and Underground 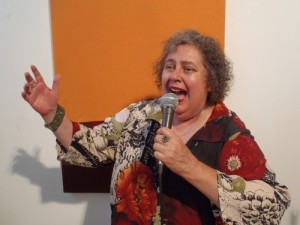 One of the many, crazily ambitious avant-garde events that took place during the New Music America 1986 (NMA) was Bonnie Barnett’s participatory performance of HUM in the downtown Houston tunnels (and simulcast on KPFT radio). Twenty-eight years later, the Los Angeles-based vocalist/composer/improviser has returned to Houston to recreate the piece. Twice.

On Thursday evening, Barnett will bring HUM to James Turrell’s Twilight Epiphany Skyspace, located adjacent to the Shepherd School of Music on the Rice University Campus. Skyspace HUM will begin at 7 pm and all are invited to participate—no musical or vocal experience is necessary. Then, on Friday at noon, she’ll be doing it underground again! Audience participants can go to the Esperson Building, 808 Travis Street, enter through the lobby and take the elevator down to the tunnels.

The two performances are being held in conjunction with the exhibition SonicWorks at DiverseWorks, a show of sound art originally inspired by NMA, which was headquartered at DiverseWorks back in 1986. For some history of the NMA, read Peter Lucas’ recent article “SonicWorks Echoes Past Blasts.” The exhibition, which includes NMA ephemera, will be on view through March 1.