He Wishes for the Cloths of Heaven: Remington’s Night Paintings 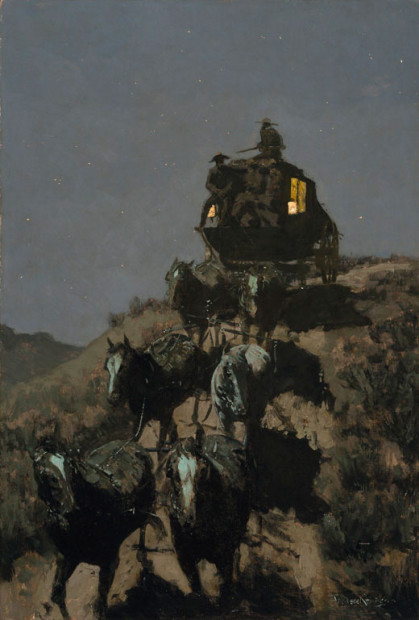 Frederic Remington, The Old Stage-Coach of the Plains, 1901. Oil on canvas, Amon Carter Museum of American Art, Fort Worth, Texas

In the niche that is Western art, there is an interesting little subgenre (a nichier niche) of Frederic Remington’s night paintings. Remington painted over 70 night scenes late in his short career. Some of them, like The Old State-Coach of the Plains, above, fit neatly into the tradition of night painting. Others are weird, with a sickly green cast that sort of evokes the light of a full moon (but also sort of evokes old movies where they filmed night scenes during the day and just darkened the camera with filters). Although they’re less well-known than his brightly-colored action paintings of horses and riders, night scenes are more than just an odd tic in Remington’s oeuvre. Indeed, the National Gallery of Art mounted an entire show dedicated to the subject back in 2003. And as it turns out, there are many fine examples of Remington’s night paintings (which the National Gallery calls his “nocturnes”) in Texas collections. 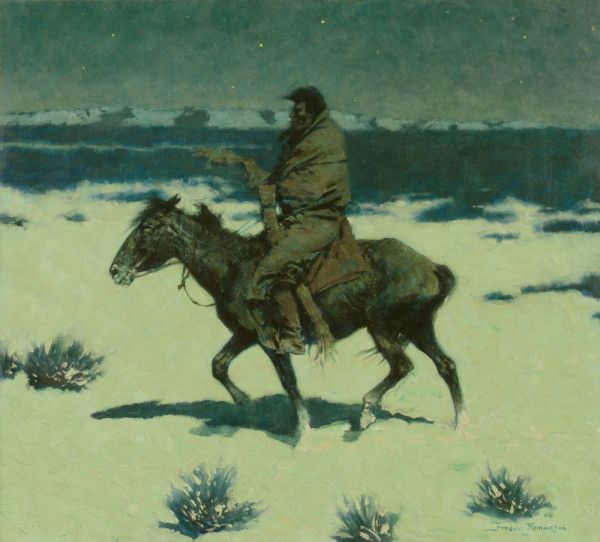 Paintings of night scenes are as old as painting itself, and like a person’s thoughts at two in the morning, they tend towards the melodramatic. Something Biblical, or violent, or naughty (or all three) is usually going on in the high-contrast genre. 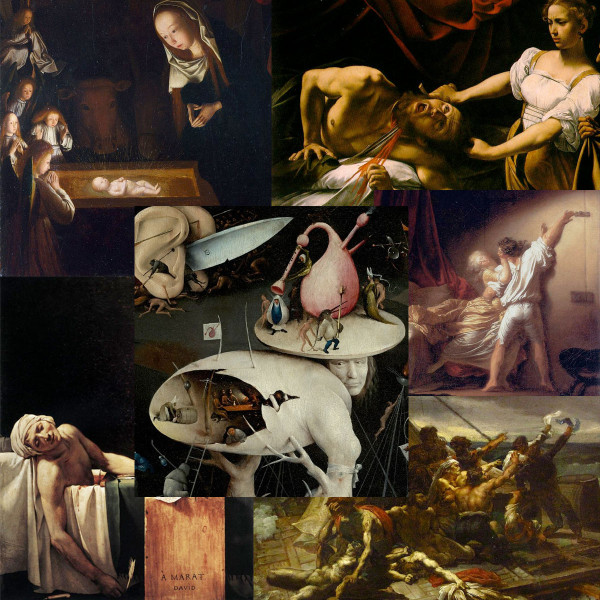 And yet, Remington’s night paintings aren’t so much bloody or violent as they are vaguely ominous. As a young man, Remington made his living as a skilled pen-and-ink illustrator of cowboy life for East coast publications. It wasn’t until 1898, when he enthusiastically (and naïvely) went off to Cuba to be a correspondent in the brief-yet-messy Spanish-American War, that the scales fell from his eyes, he acquired a more nuanced worldview, and he quit being an illustrator and started being an artist. 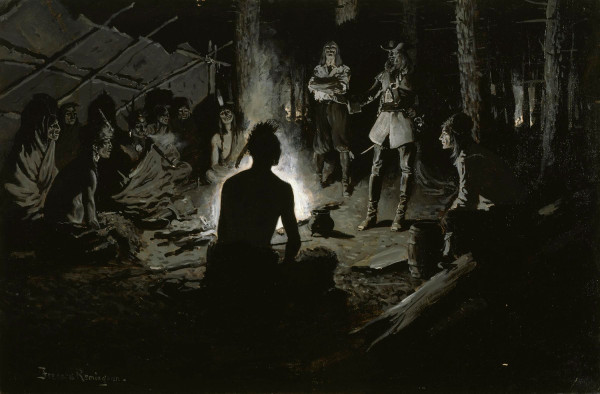 There are a few things that are interesting about Remington’s post-wartime transformation: 1. His subject matter became less straightforward and narrative, and far more ambiguous, sinister, and stripped of unnecessary information; 2. His style lost the hard-edged, cartoonish quality of illustration, and became more painterly; 3. After working with just black, white and gray for many years as an illustrator, he threw himself into mastering the use of color. 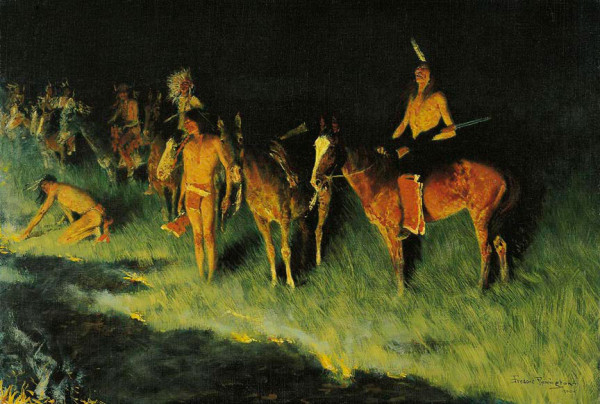 Yet the siren call of desaturation must have been hard to resist, because an interesting handful of his night paintings involve the aforementioned limited palette of grays and greens. One of the best of these is at the Museum of Fine Arts, Houston: 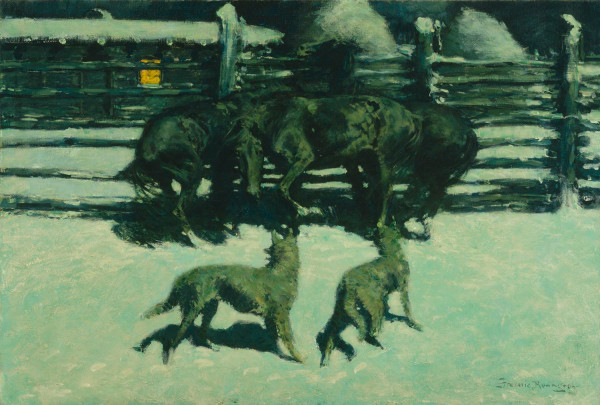 As one critic noted at the time they were first exhibited, the figures in Remington’s nocturnes are stalked by death: “Death’s “shadow” had been the subject of nocturnal images in the past, but Remington’s late nocturnes are focused less on the certainty of death, than on the anxiety, the fear that death may appear at any time.”

On your travels through Texas museums, take a moment to seek out these strange and wonderful depictions of a fleeting, uneasy world that could be said to embody a darker side of our state identity.

one of my favorites is the Artemesia Gentileschi painting of Judith and Maid Servant with Head of Holofernes.

We worked on three of these for the National Gallery exhibit and were able to study them thoroughly, including pigment analysis and cross sections. Few understand what a great and innovative artist he was.

I agree. Remington enjoys widespread popularity with the general public, but I think he’s disregarded in the art world because it’s not cool to like Cowboys and Indians (except in an ironic, Richard Prince kind of way).

“Paintings of night scenes are as old as painting itself…” Really?

Yes! See my snappy (albeit Western-centric) mash-up above. I can’t speak to ancient times, but there’s a ton of night scenes in painting starting in the early Renaissance.

(Or wait: were you being funny?)

I guess that I found it sort of funny that the age of “painting itself” begins in the late 15th century in western Europe. Really?

Well, sure. In those old caves people weren’t painting, they were just blowing dirt on the walls or whatever.

Remington is great. There’s a diner in my neighborhood in Park Slope called The Grand Canyon. It is decorated with Remington prints.

Ran across this today:

“…when the U.S. battleship Maine exploded in Havana harbor in 1898, the two papers both published a supposedly suppressed cablegram saying the explosion was not an accident. There was no such cable, but it boosted sales of both papers to record levels, and the public demanded that President McKinley declare war on Spain. As the famous story goes, artist Frederick Remington was sent to Cuba by Hearst to cover the war. He wrote home, “There is no war. Request to be recalled,” only to be told, “You furnish the pictures, I’ll furnish the war.” And so he did.”

Remington’s “Starving Moon” realistically depicts a high plain’s night under a full moon, with desperately quiet women with children harvesting butchered bison carcasses left rotting by hide-hunters. The scene’s silence and solemnity captured in the wintry snow-covered barren landscape speaks of the death of a peoples’ era. For those judgemental elitist critics who find banal romanticism beneath them based on the popularity of the glorified cowboy images, they show their myopic ignorance of his inclusive canvas preserving a chapter in our nation’s history- the good, the bad, and the ugly.

Glad to know about that piece. Here it is for the curious: https://collections.gilcrease.org/object/01272331