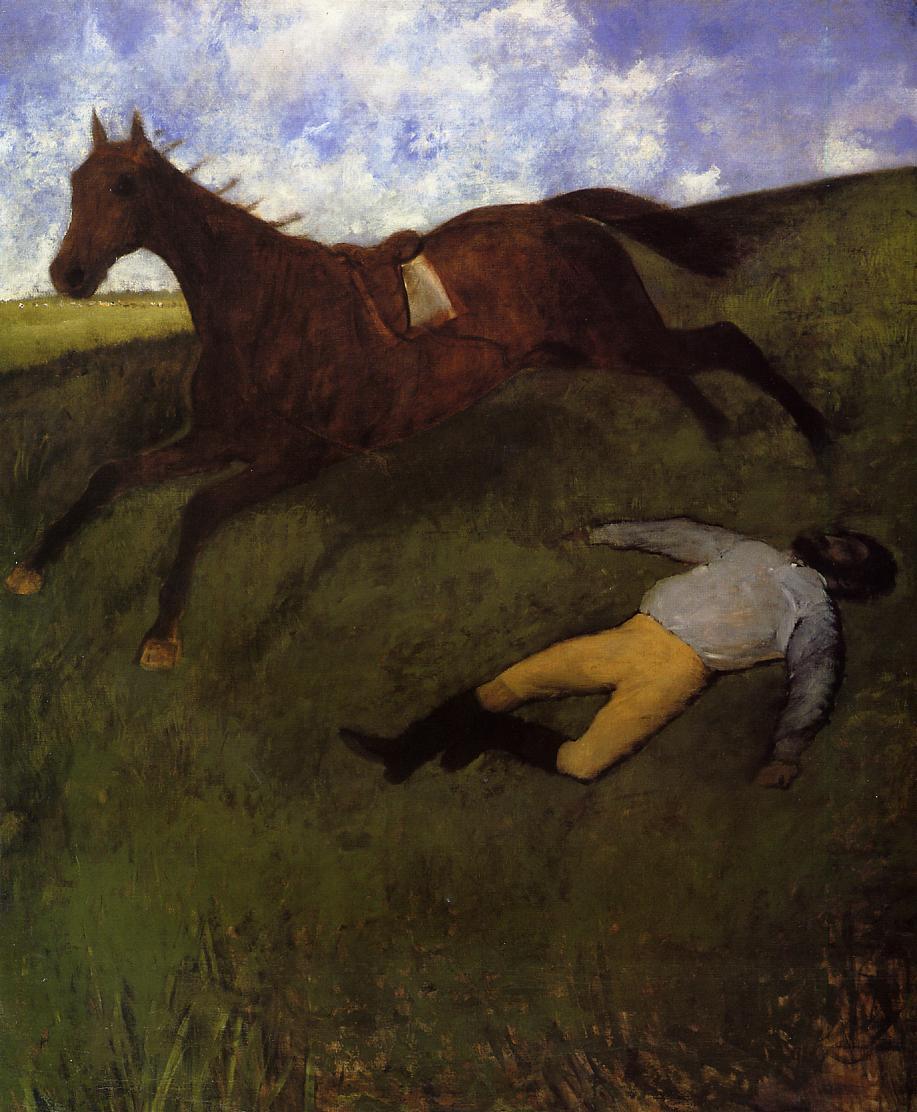 Here I sit, with the responsibility of finding meaning in Degas: A New Vision (at the Museum of Fine Arts Houston) one day before a presidential election, which will put into motion a series of irrevocable political, social and economic changes that will determine the geopolitical fate of the country into which I was born and of which I am a citizen.

This is a tall order. But I’m Darwinian about art. If Degas’ paintings, drawings, sculptures and photographs have nothing to say about the rise of left and right-wing populism, the decline of Western hegemony in the world, and the fact that the United States of America has a 40% chance of electing an Eastern-European-style right-wing nationalist, then I can’t do the work justice. Let’s see if Degas survives… .

Artworks are grounded in history. They are political. But they also function as autonomous aesthetic objects. The job of the contemporary art critic is twofold: to understand the politics of different kinds of artworks but also to evaluate their aesthetic value because historically conscious artworks with no aesthetic value have no sustained or sustaining power. It’s also true that context matters. A beautiful aesthetic object grounded in social norms that have become abhorrent should not be dismissed or destroyed, but its contradictions must be recognized. 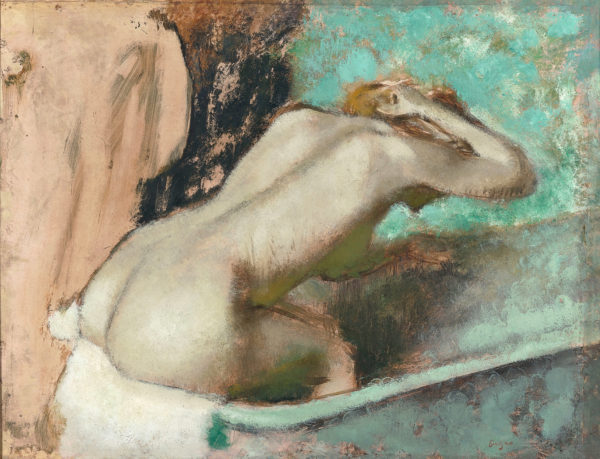 The museum’s didactics present a good entry point into a discussion of both materialist and aesthetic perspectives on Degas’ work. The curators frame his early paintings between the polished classicism of Ingres and the radically unbound color of Delacroix. Ingres was a student of Jacques Louis David and looked to Greek and Roman antiquity as his model in painting and teaching. He was a strong conservative voice in the artistic debates in Paris through much of the 19th century.

Delacroix, at the other end of the political spectrum, privileged improvisation, exoticism and most importantly, he rejected strong standards of academic draughtsmanship. For Delacroix, the meaning of painting was carried in pure and unmodulated color, and not coherent three-dimensional form. The extent to which a Western painter was willing to deconstruct and transform the then-500-year-old institution of painting itself has a direct correlation with the extent to which they were willing to deconstruct the social and political institutions that had brought Western painting to the point at which they encountered it. Style was, and still is, a barometer of artistic politics. 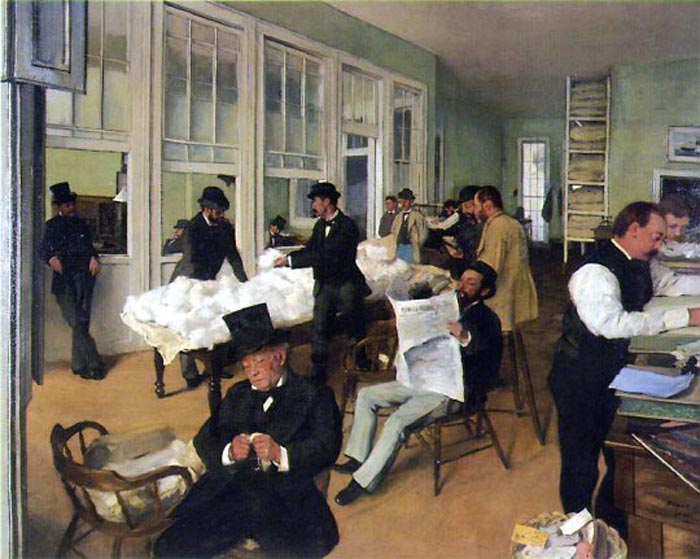 Through the 200 works in the exhibition the viewer watches Degas move back and forth between these two stylistic poles. While Degas’ stylistic evolution roughly follows the historical model in which 19th and early 20th century painters tended to begin their careers, with a tight hold on tradition, and gradually loosen their control over their medium, he is less linear than that. 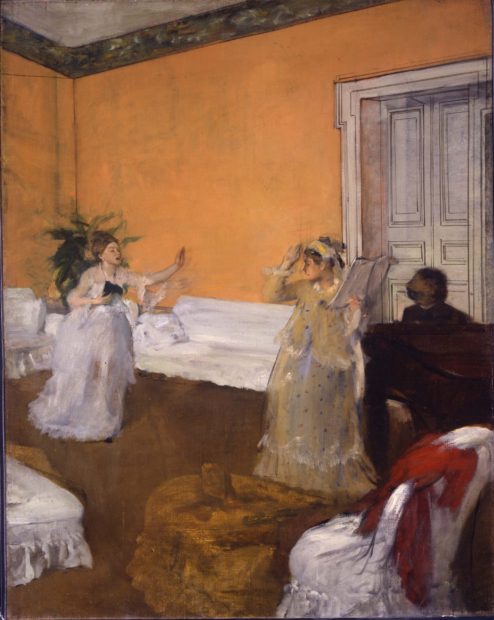 A canvas taken to be a vigorous late work will be followed by another more tightly controlled picture from an even later date. Degas’ style reflects a mind that comes again and again to the edge of aesthetic incoherence, only to double back to the controlled influence of Ingres, sometimes in the same picture. These contradictions within the frame of a single picture sometimes lead, as in The Song Rehearsal, to a powerful, genuinely bizarre picture. In other works, Degas’ idealized, smoothly modeled people comfortably inhabit clothes and environments as loosely worked as any Delacroix banner. 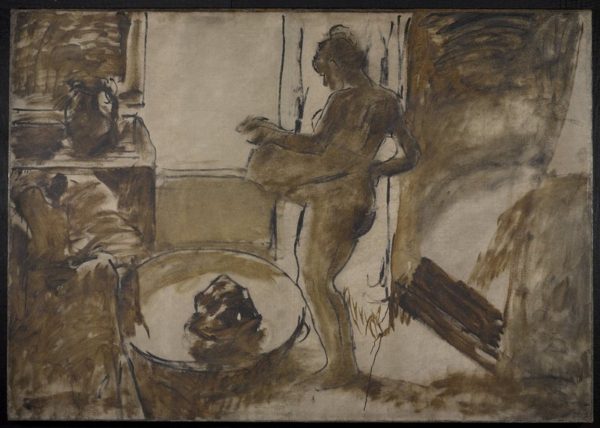 Degas’ synthesis of tradition and innovation make him a more interesting painter than either Ingres or Delacroix, and it lies at the heart of a democratic political ideal. In Nude Woman Drying Herself, a large late picture, Degas shows the viewer that the institution of painting can take just this much deconstruction, but only this much, and remain coherent. It’s a great picture and its tension still prevents me from deciding if it succeeds or fails.

In his personal life, Degas did not always maintain this judicious balance between progress and entrenched tradition. In 1894, The Dreyfus Affair divided France along military, religious and anti-Semitic lines. A Jewish Army captain named Alfred Dreyfus was convicted of espionage and imprisoned for five years on Devil’s Island. In large part due to novelist and art critic Emile Zola’s open letter, J’Accuse!, published in a Paris newspaper, the Dreyfus case was reopened and it was determined that evidence that would have absolved Dreyfus and convicted another man of the crime had been suppressed by the military and the courts.

Degas lost many friendships when he (and Cezanne and Renoir) aligned themselves with the Third French Republic in the conviction of an innocent man fueled by racism. Indeed, there is a good deal of anecdotal evidence that Degas was sincerely anti-Semitic. Manet and Pisarro, among others, opposed the injustice, recognizing in it the European anti-Semitism that would emerge again less than 40 years later in the poison showers of Nazi Germany.

What, then, as a contemporary viewer, should I do with Degas the painter in light of his attachment to stylistic conservatism and the moments in which I see him either blind or unresponsive to the progressive demands of his era? I am unable to dismiss his contribution to liberal modernity based on his personal and political contradictions—the work is too strong. Nor can I use him as a hammer to condemn the Western artists’ tradition from which his work emerges. That same world also produced Delacroix and Zola. At best I can recognize in him the sticky complicity of civility and barbarity that is part of every culture. 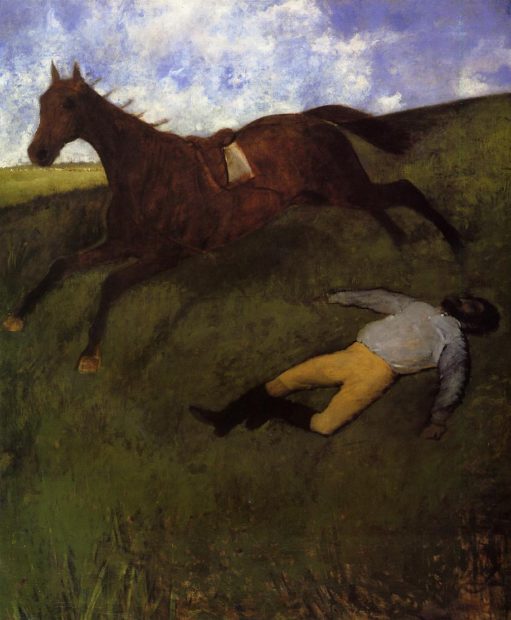 My favorite painting in the show is Fallen Jockey. A late reworking of an earlier racetrack scene, Fallen Jockey, more than any other picture in the exhibition, is on the edge of pictorial failure. One of the largest canvases, it is stark and unadorned, divided by a slash that cuts the earth from the sky. The black-eyed, spike-maned horse, in its flat, ambiguous space, recalls archaic depictions of animals on cave walls. It seems to be part of an earlier, bloodier, more disordered universe. It has thrown its rider to the ground where he lies dead and comical in his yellow pants.

Here Degas, old and fighting blindness late in life, is at the limit of his ability to control his pictorial surface in this painting. As I looked at rider and horse I was reminded of the contemporary formal prankster Peter Doig’s crude archetypes. Unlike Doig’s work, there is no laconic, post-modern lack of interest in Fallen Jockey. The struggle to hold this dark, awkward picture together around its near failure is real. In the end, battered by moral failings, Degas presents a picture of a human being who struggled to create a unique and individual vision of the world through the only eyes he had: his own.

At the Museum of Fine Arts Houston through Jan. 16.