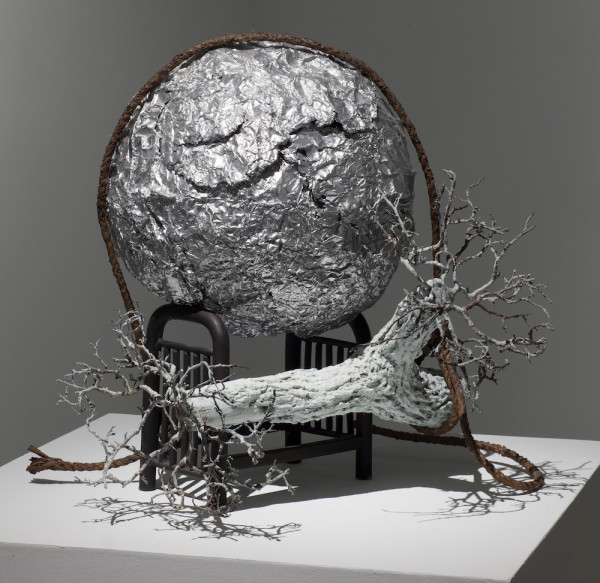 I first heard of Harry Geffert years ago when reading an interview with Linda Ridgway in Art Lies; she mentioned how he taught her how to bronze ridiculous and beautiful things like lace and tiny tree branches, which I’d seen at the Modern in Fort Worth and Talley Dunn Gallery many times. Then, though I didn’t realize it was Harry they were off to see, I heard of him again just a year ago when Cam Schoepp, my grad school advisor and friend, took the TCU undergrads to the foundry of the founder of TCU’s sculpture department, from which they returned with stacks of red molding wax for the department. The wax stacks sat on a work table in the TCU sculpture studio for months, like lots of stuff in a studio does, prompting my eight year old daughter to write in permanent marker on some part of my own studio: “Mom, is that wax yors?” [sic]

But I didn’t piece together who Harry Geffert is, really, until I saw his show at Cris Worley’s gallery the other day: Harry Geffert is the guy that does stuff—as in, if you can think of it, he can make it… in bronze. For years, Geffert ran his foundry at the service of other artist clients in need of just such fabricating—Frances Bagley, Tom Orr, Linda Ridgway, among others—but he never stopped making his own work, the latest of which is at Cris Worley through January 4.

The show begins with some earlier work from Geffert that I think is his strongest in the show, namely two wall-mounted bronze casts of water: one black, one white. They look like Lynda Benglis’ poured latex sculptures, all rippled and full of frozen movement. But unlike Benglis’ polyurethane numbers, these bronze Gefferts are formidable and more than a little confounding. How does a person cast WATER? The mystery of the things, especially that the weight of them can hang on a gallery wall, only adds layers to the simple beauty of them; they are earthy and messy and unevenly executed, which makes their surfaces, like their antecedent, ponderous and deep.

The rest of the work in the show, like the water sculptures, deals in the natural world, and trees take the starring role. Geffert, like he did for Ridgway, casts spindly branches, making the breakable things strong and resilient, despite their appearance of still being fragile. There are branches “collaged” to other branches and bits of clever assemblage, all cast together to form new hybrid objects that, despite their real metal-strength, trick us into believing their frail appearances are their sum total. That play between appearances and strength is a current that runs through all of the work here, creating a constant dialogue between perception, expectation and evidence, not unlike our encounters or inquiries in nature. And as with the sublime in nature, wonder is a big part of the experience of being with Geffert’s complicated work. A great many questions are asked in looking at these objects that go unanswered, and that is their power, an encounter with mystery.

Gathering of an Idea

But while the work may be beautiful and mysterious, it does walk a line awfully close to sentimentality—a kind of sweet look at the sublime. For even though the fires of the forge went into making these fragile branches and tangles, there is little in the work that confounds the mastery of their own execution. There is little fire in the object itself, not enough tension beyond that strong/fragile, barely there/hard wrought relationship, which is why I felt so unsatisfied by much of the work here. That dissatisfaction may belie some broken preference for post-modern conceptualism in me, but maybe not. I think there is something wanting in Geffert’s work, something he begins to get at in his cast water pieces—a fight between material and subject that feels still in-progress, still current and volatile—that is lost in the tidy craftsmanship of the more recent tree sculptures. Even when he deploys the illusion of wind or pressure upon some of the small tree pieces in an effort to convey tension, what registers is only a sense of the simulacrum, the stand-in for the real thing rather than the suggestion of an entirely new creation at his hand.

I wonder, then, if my problem with Geffert’s work is that I want to feel the weight of his material—that steadfast, art historically loaded answer to ephemerality, bronze? Do I want it to be more honest, less tricky? I think so. Surely Nature, with all of its own tangled parts and overlaps and contradictions, has another challenge for the foundry and for Geffert’s wiles and wisdom.

Harry Geffert: Studio Dreams, the artist’s second solo show at Cris Worley Fine Arts, will be on view through January 4.

Reading Lucia Simek’s review of Harry Geffert’s exhibition reveals not so much the actual art in the room as it does her conceits. For instance, she states “I want to feel the weight of his material. Do I want it to be more honest, less tricky? I think so.” Has the old saw about truth in materials emerged from its well deserved grave Lazarus-like? Ms. Simek’s comment that her “dissatisfaction may belie some broken preference for post-modern conceptualism in me…..” may be spot on. Geffert’s work is grounded in sensual encounters prior to the emergence of an idea generated by that encounter. A critic looking for a didactic component in Geffert’s work will be disappointed.
Geffert’s most recent works use exquisite landscapes to draw us in. Once there and over time ambiguity sets in and creates a tension born of not knowing what we are really looking at.
This is similar to the vertiginous effect of Monet’s water lilly paintings. At first glance they appear sweet. After half an hour, they are very disquieting. In both cases the transient nature of our powers of perception are woven into the art.
We control the time we spend looking. How long is that?

It is so easy to dismiss or discount an artists work based on one’s own subjectivities. Everyone, especially a critic is supposed to bring a bit of reflection to a review but Lucia, have you ever tried to cast a tree branch or bundle of tree roots and fooled the viewer into believing that they were looking at a natural element instead of a replication in bronze. The knowledge and craftsmanship to do so is quite extraordinary and excruciatingly labor intensive. Now I would agree that the time required to make a work does not automatically qualify it as good art but to subtract points because it doesn’t explore the weight of the medium I think is missing some of the point. How does an artist use a medium in an unexpected way and present a subject matter in a fashion that makes the viewer wonder how it was done or why. I agree that the water works are interesting but I disagree that they are stronger or weaker. They are as metal should be- frozen and heavy and static. I personally don’t think they look much like water but more like a cold hardened lava flow but I know how they were made and so understand the title. But that is the same subjectivity that I detest in reviews, so shame on me.

Harry’s work is not everyone’s cup of tea but if the underlying mythology and narrative is what you love in works of art then Harry’s works are chocked full of story and mysterious meaning and if the guy can cast a saltine cracker and make it look like I could use it for my tomato soup then I am propelled to ask the question ” Why a saltine? Why not a Ritz.” Mr. Geffert knows that answer.

Christine Rees of glass tire said he should have done something else with his life??? I admire his work greatly!