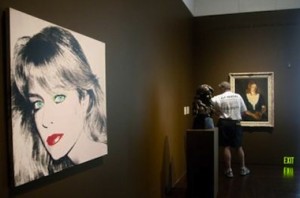 The official verdict is in and The University of Texas has lost its lawsuit against actor Ryan O’Neal. On Thursday afternoon, a jury found that the Andy Warhol portrait of “Charlie’s Angels” star Farrah Fawcett belongs to O’Neal. The painting, valued at $1-12 million (depending on the appraiser) will not be joining its twin portrait at the Blanton Museum of Art.

The three-week trial, which included tears, relationship gossip, celebrity witnesses and clips from “20/20” and reality TV shows, concluded with closing arguments a few days ago, in which UT’s attorney stated, “You’ve seen Farrah. You’ve heard from Farrah,” and urged the jury: “Please, please, speak for her.” But, according to CNN, O’Neal had testified previously, “I talk to it. I talk to her. It’s her presence.” One can only imagine how Warhol would have joined in on this mythical conversation with his painting, as he was famous for such succinct responses as “Um, no,” and sometimes, mischievously just let others simply answer his interview questions for him.

We sought the second Warhol portrait of Farrah Fawcett only because we wanted to honor her legacy. In her Living Trust she left “all of her artwork and art objects” to The University of Texas, and we thought it important to try to enforce her intent.

We are disappointed that the jury saw the evidence a different way, but we will continue to honor Farrah with the Warhol portrait we do have along with her other works of art.

So the conversation seems to be over. Except that the jury also found that Fawcett and O’Neal jointly owned a tablecloth painted with hearts, addressed to both of them and signed by Warhol (and currently held by UT). Another hearing will determine what to do with that keepsake in January.

It should probably read “$1 or 12 million,”extremely different appraisals chosen by opposing lawyers.