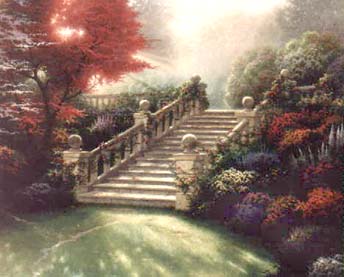 Thomas Kinkade, the marketing pioneer who discovered that, with proper context, reproductions of paintings could be sold for original painting prices without actually breaking the law, (at least as far as his customers went; his company’s deceptive dealings with its franchisees were the issues in lawsuits that cost his company millions) has died unexpectedly at age 54 in California, apparently of natural causes, although an autopsy is planned. After years of artworld loathing and stunning commercial success, the self-styled “painter of light” was a household name, variously beloved and derided for uncritical sentimentality and nostalgia, even as he was envied for his commercial success.

Kinkade was like Andy Warhol,  but sold to a popular, rather than a elite, audience: discuss.

I’m still trying to figure out what “natural causes” you die of at 54?

Cocaine comes from a plant–that’s natural, isn’t it?

good point, Robert, and booze would count as “natural causes” as well under your definition…

Why knock down everyone that dies? He left beautiful work behind……enjoy it! And thank God for having had such a man on earth that shared his talent with us!