The wildest art show in Austin isn’t in a museum or gallery, but rather a raw, former commercial space adjacent to the Paramount Theatre. There’s no sign out front, though artist-run non-profit organizers Co-Lab made one: unfurled on the venue’s concrete floor, it reads LAME LEWD AND DEPRESSED printed on the backside of a Freebirds World Burrito vinyl banner. LL&D‘s invite card features images of Thai prostitutes and a literally pissed bum. The press release, primarily composed by exhibiting artist and provocateur Mark Flood, slathers acerbic wit on thick:

“Perhaps as a result of some fine print, which they didn’t notice when they signed their contracts with Satan to give themselves upwardly mobile art careers, all three of these inexplicably successful shitheads will soon be in a show at an abandoned warehouse posing as a gallery, right here in sweet unspoiled Austin, the Houston of the hill country.” 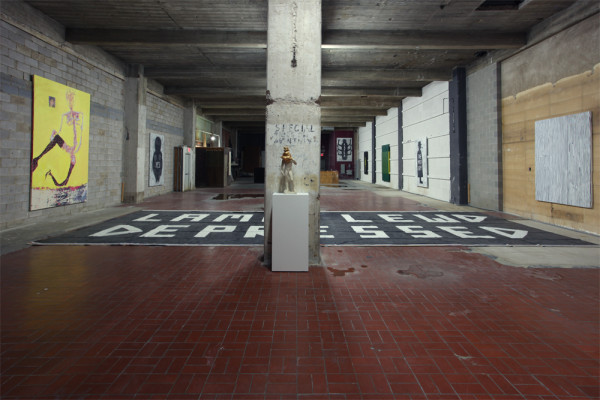 Upon stepping past that heavy door, not quite a barrier to the bustling 8th St/Congress bus-stop, into a cavernous space illuminated by a row of spotlights and aerated by industrial floor fans, you very well may catch yourself saying, “This is nice…” 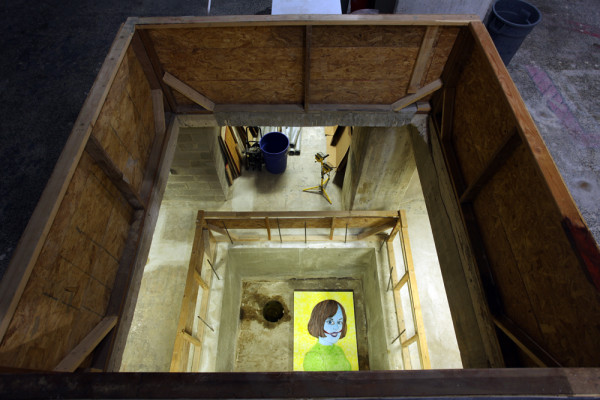 It’s not too surprising that LL&D‘s Houstonian subversion trio—Mark Flood, Lane Hagood, and Jeremy DePrez—looks smart on these mismatched walls, which still bear traces of an auto-body shop. Co-Lab’s Austin Nelsen approached curator Russell Etchen eight months ago to conceive the show, and the team achieved a miracle in clearing out the old space to install this selection of not-quite subtle paintings. Etchen’s ethos was “hang it like Dia:Beacon,” referring to the austere art temple within a refurbished factory in upstate New York, its acres of polished hardwood and white walls an ideal platform to contemplate art. Swap that for exposed wood studs and discolored concrete to get an inkling of the difficulties Etchen and Co-Lab surmounted here. Very punk, just like the art. 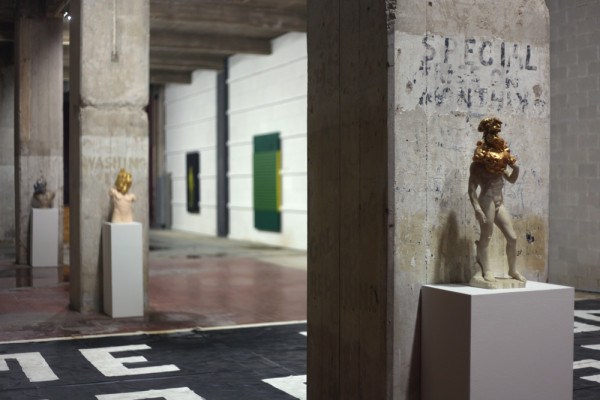 Hagood, Flood, and DePrez (the “Lame,” “Lewd,” and “Depressed” from the exhibition title; sound it out aloud and it’ll make sense) create charged works influenced by their environments. Hagood approaches his subjects—film noir, Kafka and Bolaño, women friends—like a sponge, sopping up everything he reads, sees, and senses, expelling it as airbrush onto canvas. Flood’s tongue-in-cheek press release summarizes Hagood’s soft-contoured results as follows: “…often mistaken for the cry-for-help doodles of a mentally defective child.” Therein lies the deception: observe Hagood’s crudely rendered compositions with your snark-meter down, and the weirdness and discomfort pours forth. 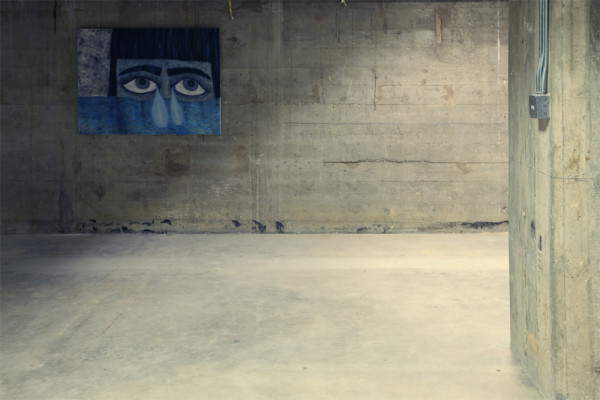 The shadowy gray consuming Crying Girl‘s background bleeds directly into her face, as if she’s just a pair of eyes and violet-tinted hair floating over a pool of tear-water. Yes Venus, which is literally the Venus of Willendorf and the word “yes,” unveils its intent slowly: is Hagood saying yes to art history? To fertility? To women? Several of Hagood’s older Detourned Busts, miniature mass-produced statuary marred by gold-colored squooshy foam, trick out the ground floor and, to me, they’re pretty, although superfluous additions. Easy to look at and “get” (classical beauty and shapeless ugliness), but they contribute little to Hagood’s subtler canvases, which are harder to unwrap but remained in my thoughts much longer. 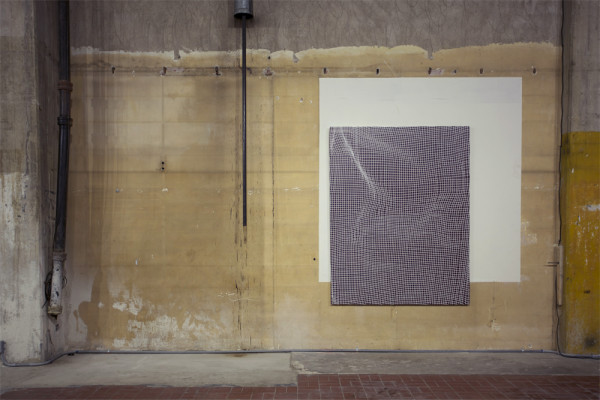 DePrez highlights his suburban upbringing in large not-quite-Op Art paintings that riff on inoffensive stuff like a dress shirt’s magnified pattern (Untitled) and a kitchen sponge (UFO). Super-mundane, perhaps, but that only emphasizes DePrez’s deliberately misshapen canvases and tweaked-out stretcher bars. He’s exposing the eccentricity and flaws within even the most ostensibly boring background. Taking the entire exhibition into consideration, I think DePrez is reminding us that deeper, complicated messages lie within even the most ordinary or “unsophisticated” compositions. 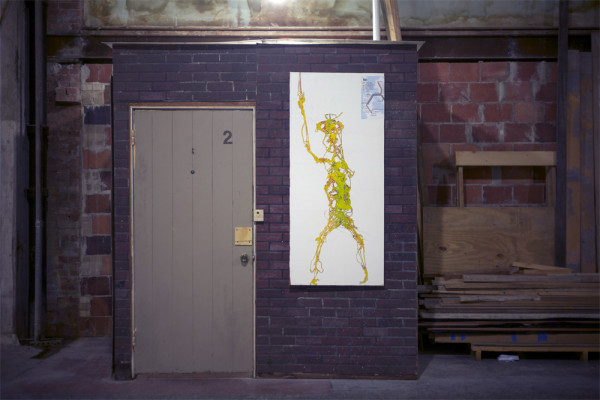 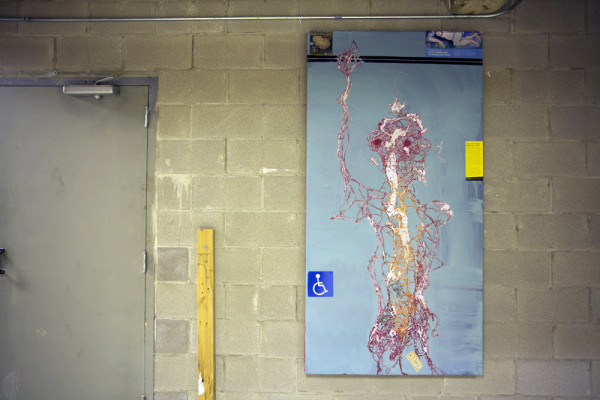 Flood’s array of mutant bus-riders is derived from studio time spent near a BART stop, around an exhibition at NOMA Gallery in San Francisco. This speaks volumes to me as a hardcore big-city commuter: both Flood’s subway newbie with a route map (System Rider, replete with BART map collage) and the seasoned vet out for a recreational afternoon (Muni Rider, with SFMOMA leaflet of Henri Matisse’s Blue Nude and an ad for “Grand Daddy Purple” marijuana). Flood might not expect anyone to gain satisfaction from this very personal series besides himself, but I’ve routinely been that zoned-out traveler, clutching the overhead hand-guard, maybe seriously jet-lagged after an international flight to wherever, reduced to a colorful circulatory tangle in Flood’s paintings. 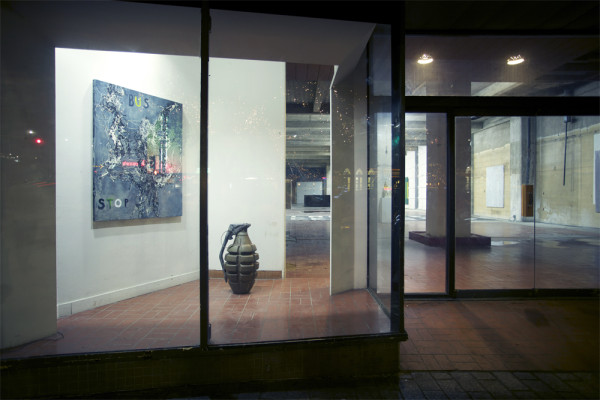 Will you feel like the exhibition title upon exiting LL&D? There is a lot of emotion-letting here, but the artists are doing it very much for themselves. These feelings are ripe for our consumption, so long as we look beyond the “simple” and “ugly” surfaces. So what’s the takeaway? Nothing trendy nor traditionally beautiful here, just a bunch of unwieldy canvases by three slightly neurotic male artists, exhibited in one of Austin’s proliferating historic, empty storefronts. It’s so against the status quo of cool, it’s practically a coup.

Lame Lewd and Depressed is on view at Some Old Warehouse, 721 Congress, Austin, through October 30.

Brian Fee is an art punk based currently in Austin, but he can usually be found in New York, Tokyo, or Berlin, depending on the art season.

Thank you Brain Fee for the excellent article. The exhibition is on view Wednesday-Saturday 1-7PM through October 30th, 2013.

Thank you Brain Free for the exellent arkicle. The exbihition is on view Wendsday-Saturday 17PM throh October 20th, 2031.