I am required by the conditions of my probation to acknowledge that I found the xeroxed artwork reproduced below, complete with its handmade label, at the Center for Useless Mediocrity during the Snoozy Retreads opening. It wasn’t in the galleries, and that makes sense because it’s actually worth seeing. The piece and label were push-pinned near each other on the wall over the third toilet in the men’s room. I stole it, but only because I wanted to pimp it to a wider audience. I can’t find Montalbano on ArtSnitch, or any of the other Registered Art Offender sites. I guess that makes her an emerging no-talent. Thanks, CF 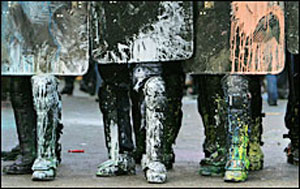 Frances Montalbano is a trans-species performance non-artist half-living in a partially submerged submarine near Bush City, formerly Corpus Christi, as part of a three-year underfunded non-creative event, partially undeveloped in disassociation with the Waller County Museum of Crummy Attempts.

The project at hand involves press releases from law enforcement agencies. Montalbano programmed a Personal Utility Device to substitute sets of art words for sets of law enforcement words in these statements. In related projects she has taught PUDs to roll joints and to give OK handjobs.

Montalbano sees her work as a comment on the exploding prison pop and the exploding cop pop, and foresees a future where the entire pop consists of nothing but prisoners and police. She asks the question “Which side will the art world, and especially the artists, be on?”

In Press Release, “NEA” is substituted for “DEA” in a prepared statement about a drug bust. Montalbano posits the NEA as yet another arm of the police state, and notes that while the NEA currently controls art with a monetary carrot, “it’s easy to imagine them doing it with a stick.”

Over 4,000 art enforcement officers took part in the raids that seized more than 100 paintings, five sculptures, four art-cars, and an unspecified amount of spare change. The seized art is being sent to a lab to determine if it was mixed with talent.

“Iloveyoubaby had a stranglehold over the residents of the Museum District,” said Twiggy Gonad, Associate Special Agent in Charge of the Houston Division. “Today, we have allowed those residents to breathe again. They will be breathing a combination of ozone, fart-smell, pollen and airborne carcinogens.”

“We have the will, and we are developing the large, shaved tools to rid the city and suburbs of the curse of illegal art,” said Mr. Hardon Shapeless, First Assistant District U.S. Attorney and Anti-Assemblage Czar. “We will enforce a Zero Tolerance policy for art that is not clever, for art that is not politically correct, for art that does not need a label or an art professional droning on and on about what it means, for art that does not resemble a stoner grad student’s begrudgingly completed homework, and especially for any art that is sensually pleasant without a tedious, rational excuse.

“This bust demonstrates that we can reduce the dangerous impact that too-creative artists have on everyone who must live in their midst. The screams of these rogue artists, the screams that you act like you don’t hear as you walk down Franklin Street, with your head prudently held down so as not to accidentally catch a police officer’s eye…those screams are literally music to the ears of the phony community we are proudly committed to pretend to serve.”

“The formidable federal penalties for artists who deviate from the approved Boring Conceptual Crap protocols have given us the excuse we always needed to combine HPD’s superb brutality with the sophisticated torture dungeons of the NEA and other art enforcement agencies. Art enforcement works best when agencies work in a cooperative, coordinated matter, like massive Rottweilers who thoroughly sniff each other’s magnificent behinds before playfully mauling a criminal suspect. The synergy of combining local, state and federal resources dramatically enhances our ability to behave like sensuous, sexy guard dogs, sniffing leather boots and gloves, each knowing what the other dog has in his great heart but can never say out loud. Because dogs don’t cry. But we will gladly beat the living shit out of somebody,” Shapeless added.

The rogue art distribution operation described in the complaint was notable for its scope and marketing tactics. The complaint alleges that the collective sold up to 2 or 3 small paintings a year, charging ridiculously low prices and holding quick, meaningless “exhibitions” in crappy, no-account spaces that were too broke even to pay for a sign permit.

“The mainstream, employed losers who attend these parties-posing-as-art-exhibits need to understand that we will be arresting, not only the producers, but also the consumers of illegal art,” said Officer Harry Cheeks of the Harris County Anti-Graffiti Task Force for the Imprisonment of American Youth. “Looking, talking, thinking and having fun are not victimless crimes. The casual illegal art user has plenty of blood on his or her hands, because casual attendance and occasional support helps keep this 200 trillion dollar a year outlaw industry thriving.

“All activities not directly related to the enrichment of the corporations who own Earth are more-or-less criminal activities,” Officer Cheeks explained. “The sooner every spark of human vitality is snuffed out, the easier our job will be.”