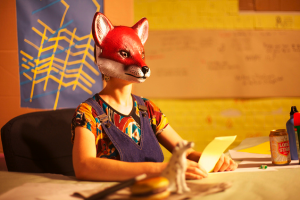 This year, Austin art space Co-Lab has set out to make documentaries for every exhibition/performance they have presented. During each show, the artist(s) were interviewed and the installation/performance was filmed. The footage has been edited into a DVD set that will be released at an event on December 10. Each of the many featured artists will receive free copies, and the remaining catalogs will be sold in bookstores and distributed to curators and institutions throughout Texas and beyond. To pay for it all, they’re running a Kickstarter campaign, which has nearly reached it’s $4000 goal, but has a few dollars to go. In addition, Co-Lab is also becoming a 501(c)(3) non-profit organization and working on a multitude of projects in an effort to revitalize their building.

Austin Curator with Gallery to Become Artist with...