Car culture is so big in Houston that the annual Art Car Parade is no longer quite enough to contain all the car enthusiasm in the city. Now, the Houston Arts Alliance, the Houston Museum of African-American Culture, and Workshop Houston have teamed up to present the first ever Houston Slab Parade and Family Festival on October 20.

Slab culture, which is growing in national popularity, came out of the late 1980s Houston hip-hop scene. Slabs are commonly older-modeled American sedans enhanced by various types of body and interior modifications. The parade will feature 50 Houston-area slab vehicles, as well as customized bicycles crafted by youth participants working with Workshop Houston. The slabs and their owners and customizers will be hanging out to interact with festivalgoers.

There will also kids’ activities, live music and performances, and expressions from the major players in the street art scene. 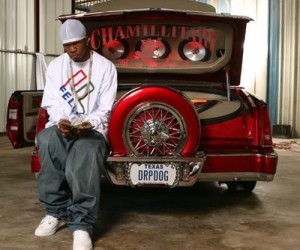 Houston-raised Chamillionaire with his slab