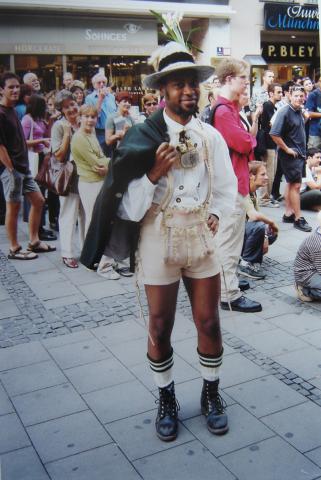 Jean-Ulrick Désert is a Haitian-born American artist living in Germany. His performance project Negerhosen 2ooo is one of the standouts of the soon-to-close Radical Presence: Black Performance in Contemporary Art at the Contemporary Arts Museum Houston. The project involved the artist dressing in traditional Bavarian lederhosen and traveling through Germany—and beyond. Simply being a black man in Germany is enough to garner stares, even without the lederhosen. But the lederhosen turned Désert into a certified public spectacle. Along the way he was photographed with random people he met. He then hand wrote details of his encounters on the printed photographs. An old shoemaker was flattered by his assumed interest in Bavarian culture and whipped out his accordion. Naked German sunbathers eagerly posed with him. A rare few saw cultural critique. A black American carpet distributor living in Germany got it. 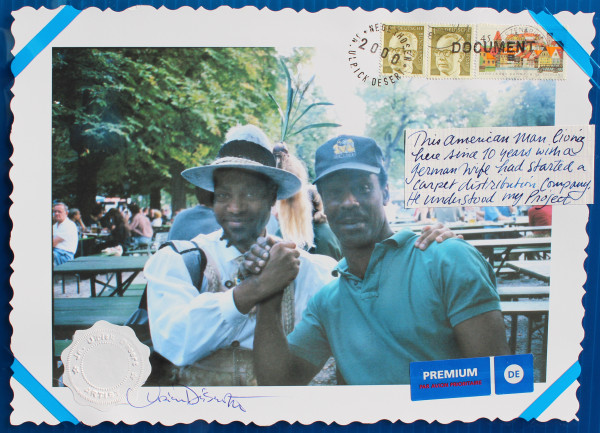 I was interested to see work dealing with black artists in Europe, specifically Germany. Désert’s Negerhosen and Wayne Hodge’s Negerkuss (2009) both incorporate the German “neger,” a rough equivalent of “Negro” and a word no longer considered acceptable. And both performances hone in on the very real and under-acknowledged racism that exists in Europe. (“Negerkuss” is also the common name of a chocolate-covered marshmallow candy.) There aren’t details of the Negerkuss performance (frustratingly, there are no descriptions of the original performances anywhere in the show) but the title and fact that it incorporates a rubber mask of a big-lipped black “savage” sets it in Europe. (America’s offensive racist crap is mainly vintage and on eBay.) 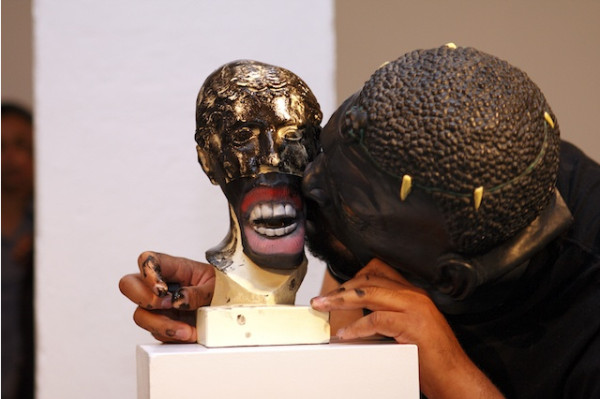 Googling reveals that Hodge found the carnival mask at the bottom of a bin in a German store. Europe may have universal healthcare but they don’t have widespread awareness that this kind of shit is offensive. I mean, people still do blackface in certain public festivals (as opposed to within the confines of Ole Miss fraternities). Hodge cut the mouth out of the mask and glued it over the mouth of a white classical bust of Cleopatra, a replica of a 35 B.C.E piece in a Berlin museum. He then donned the mask and proceeded to cover the piece with black lipstick kisses, darkening the white plaster, transforming a classical image of beauty into something approximating the black caricature of the mask.

Other work by young artists includes made-for-video performances from Internet sensations like Jayson Musson delivering his ART THOUGHTZ as the character Hennessey Youngman and Kalup Linzy’s DIY soap operas. Musson’s smartass and informed skewering of the art world with a hip-hop delivery has been emailed around by said art world for a while now. His mockery of Damien Hirst is priceless and his video on relational aesthetics is funny as hell. He starts off explaining it as when “someone with an MFA wants to meet new people…” Musson’s videos roast the art world.

Kalup Linzy’s Conversations Wit De Churen II: All My Churen (2003) is on view. (You can also check out much of Linzy’s oeuvre on his YouTube channel.) “Churen” is an over-the-top, soap opera-inspired drama in which Linzy plays almost all the characters. You might pigeonhole Linzy into some sort of campy satire box but he’s an artist who keeps you guessing. I made it to the Houston Museum of African American Culture to see Linzy’s performance. He sang the soundtrack to his Romantic Loner video (also on view), backed by a pretty amazing band. Linzy was maddeningly hard to pin down. He doesn’t have a great voice but sang with the earnestness of someone who thought they did. It was a very low-key performance compared to his soap opera videos. Was he really playing “Kaye,” his Romantic Loner character, or playing himself? Whose dream was it to perform Donna Summer’s “Bad Girls” live?

The CAMH made a concerted effort to present a number of other live performances. (The last performances will be February 15 at 6:30 and will feature work by Xaviera Simmons and Jacolby Satterwhite.) You can see the residue of Tameka Norris’s performance in the show. Two faint, drippy lines run horizontally around the sheetrock of a three-sided room in the main gallery. A video player on the wall shows the piece performed at a different venue and, for those who, like me, missed the CAMH performance, it reveals how those lines were made. The artist, clad in an orange prisoner-style jumpsuit, sliced a piece of citrus with a knife and then used the knife to slice her tongue. The pale, watery lines along the wall were made by saliva mixing with blood from the artist’s mouth.

The performance video includes some overhead shots and shows the mostly white audience that crowded around and stared at Norris as she cut herself. For me, the video made the piece less about the artist’s actions than the fact that a bunch of people stood around and passively watched someone harm herself. Maybe it was different if you were in the crowd (performance always is), but the video intentionally or unintentionally makes the work even more disturbing.

Norris’s piece is one of a number of performance works in the show in which the artist does something particularly painful in front of an audience. It’s a familiar scenario in performance art and it’s one I have a problem with. By providing an audience for someone who is hurting themselves, you are complicit in that harm. And sometimes, that’s the point. In Clifford Owens‘ CAMH performance, the audience was apparently more than complicit. According to Carrie Schneider’s review on Glasstire, “Not a Big Fan of Clifford Owens,” Owens instructed the audience to “do something to me that you will regret but you won’t apologize for.” (Other artists had created the performance instructions for Owens.) Responses apparently ranged from kissing Owens to throwing beer on him to calling him the “n” word. There is only photo documentation of past Owens performances in the gallery. I can’t really comment on what I haven’t seen, but bringing out the worst in people is a subject already exhaustively explored by reality TV.

The viewers certainly become a part of the 11-minute video of Sherman Fleming’s Pretending to be Rock (1993), in which the artist is on his hands and knees for two hours under 200 dripping candles while wearing a thong. (I got the details of the performance from Fleming’s YouTube video description.) I can understand the artist exploring the idea of endurance and stoicism, but seeing it in front of an audience whose members are taking pictures and sitting and idly watching from theater seats makes me think “what the hell is wrong with the audience?” more so than “what the hell is wrong with the guy on his hands and knees in a thong with hot wax dripping on his back?” Dancer Josephine Nicholson is suspended in a harness near the artist the whole time with water dripping down on her. Seriously, the whole thing looks like it was shot in some arty S&M club. There is one part where this woman who looks like somebody’s grandma walks behind the artist and takes a photo of his mostly bare ass and the piles of wax on his back. I just wish “Hennessy Youngman” had done a voice-over commentary for it. 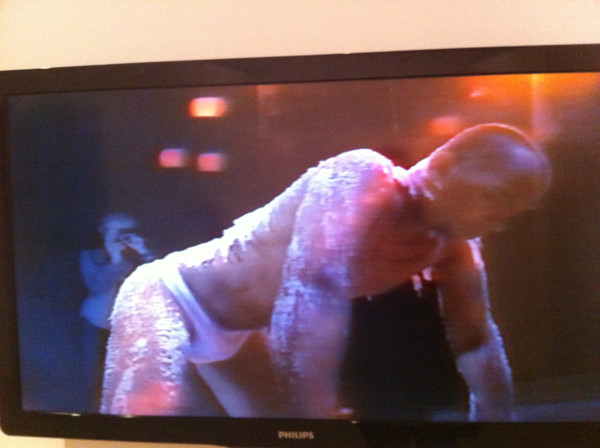 Check out the woman checking out Fleming…

There is no visible audience in the 2011 video My dreams, my works must wait till after hell… by the collaborative duo Girl [Simone Leigh + Chitra Ganesh] and titled after a Gwendolyn Brooks poem. It’s one of the video works screened in its own room, which serves it well. (Presenting a lot of video in a group museum show is almost as tough as presenting a survey of performance art.) My dreams is a static shot of a woman’s body as a landscape—an oppressive one. She’s lying on her side and you see the line of her back like a smooth hill, ending in a pile of dusty gravel covering her head. You keep waiting for her to lift her head and free herself. You watch her side move as her breath becomes faster and faster. You imagine her trying not to hyperventilate. The pounding of a kettle drum ratchets up the drama. The self-control is palpable. 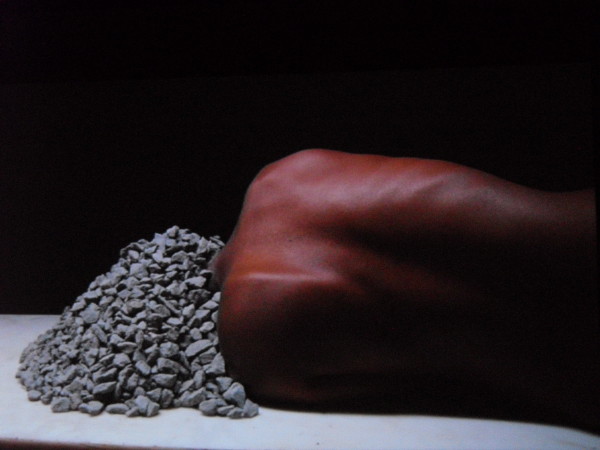 Girl (Simone Leigh and Chitra Ganesh), still from My dreams, my works must wait till after hell… (2011) Video, 7:14 minutes. Courtesy the artists

I think I would feel differently about the video if other people were shown crowded around and gawking down at the woman. It’s still voyeuristic but the separation of the video keeps the audience out. Its wall-sized projection dwarfs the viewer. It somehow remains a private act.

Radical Presence is filled with diverse and well chosen work, but the show itself isn’t giving you much information beyond what is displayed. And someone unfamiliar with performance art or any of the artists in the show is really going to be at a loss. I’m not advocating wall text to spoon feed meaning to viewers but with so many things that are essentially relics and records of performances, viewers need some basic who, what, when and where. Even something as seemingly straightforward as Dave McKenzie’s While Supplies Last (2003) still needs more information. I see photos of the artist handing out bobblehead dolls of himself while wearing a giant papier-mâché bobblehead. The bobbleheads themselves are on display. But I don’t know where the performance took place. Was it in the context of an art venue or a baseball stadium? How long did he do it, how many did he give out? Giving out thousands of bobblehead figures to the general public, figures depicting someone no one knows, is different from giving a few to art cognoscenti. 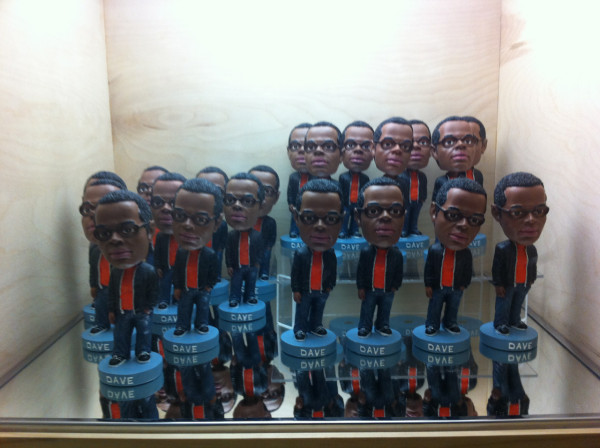 For the sake of the exhibition, it’s a shame that the catalogue for Radical Presence is coming out after the show closes. The show’s brief curatorial statement asserts that black performance has traditionally been viewed in the context of popular culture and drama and that the work of black visual artists using performance has been largely unrecognized. Text on the website adds that “Radical Presence provides a critical framework to discuss the history of black performance traditions within the visual arts beginning with the ‘happenings’ of the early 1960s, throughout the 1980s, and into the present practices of contemporary artists.” It’s good that the post-show catalogue for Radical Presence will be able to include documentation of the CAMH’s live performances, and it promises to be an important document. But in the meantime, viewers are left to their own devices.

_________
Kelly Klaasmeyer is a Houston artist and writer and the former editor of Glasstire.

This is an amazing show. It was heart-breaking to find out how terrible (Chris Johannson terrible!) the Art Thoughtz guy’s painting are. His videos are genius!