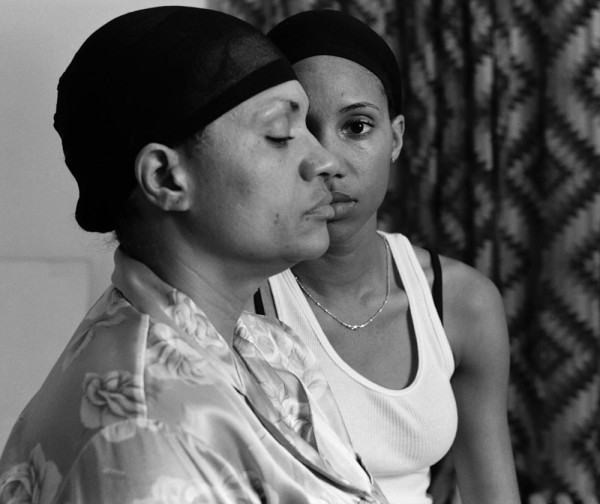 Momme, from the series Notion of Family, 2008

LaToya Ruby Frazier’s work explores the use and misuse of representation as she provides a documentary style counter-narrative to media stereotypes of poverty, disease, African-American family life, and the dilapidated post-industrial landscape of her hometown, Braddock, Pennsylvania. Frazier’s work on view at the Contemporary Arts Museum Houston focuses on the bodies of the artist, her mother, and her grandmother as they struggle with diseases likely resulting from living in a town that has been biochemically ravaged by the steel industry, then devastated economically by the flight of US Steel from that town, then abandoned by the University of Pittsburgh Medical Center (UPMC) hospital because citizens failed to provide the healthcare industry more profits there than UPMC could make in a more affluent city in the region, and finally distorted by media representations designed to cover over these truths while encouraging young people to buy denim.

Frazier’s Witness amounts to no small project in its critique of societal and political neglect of a population. The artist treats these issues with delicacy and care in her series of poignant gelatin silver photographs and looped color digital videos. Her work combines social documentary style, including influences of Dorothea Lange and Walker Evans, with psychologically intense personal narrative. Bodies are strikingly paired with industrial landscapes, as symbiotic parts of a complex ecosystem. Figures in the artist’s life and community—including the artist herself—are portrayed heroically, fighting or standing firm in the face of challenge. 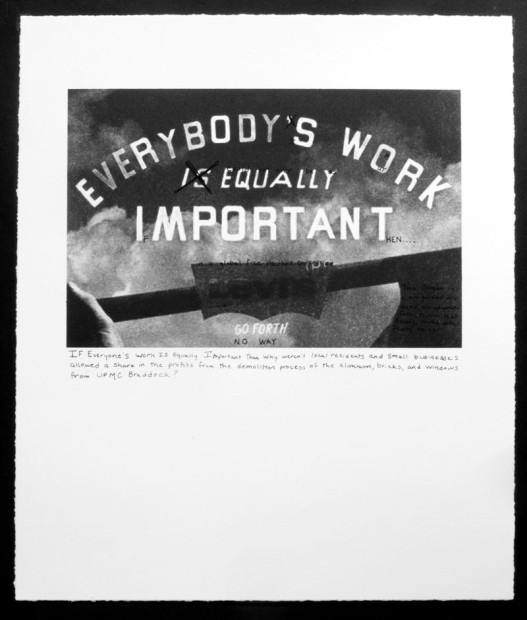 Jenny Holzer’s Truism, 2011, from the portfolio Campaign for Braddock Hospital (Save Our Community Hospital), 2011

The overall effect of Witness might best be described as visual activism. That is, Frazier’s project is crafted around the pressure between documentary and media representation as a means to provoke criticality and sociopolitical change. In the photolithograph and silkscreen print series Campaign for Braddock Hospital (Save Our Community Hospital) (2011), Frazier manipulates Levi’s “Go Forth” advertisements that misrepresented Braddock as a frontier for urban pioneers (complete with horses brought in for the photo shoot) rather than the toxic and impoverished Pittsburgh suburb that it is today. Levi’s campaign encourages Millennials to buy denim as a means to falsely participate in the manual labor of American urban and industrial development. Frazier’s critique challenges whose labor is truly valued, what opportunities are actually possible, and how precisely one should “go forth” without resources, access, and means to healthcare, transportation, and other public services. She pairs these written-over advertisements with images of local citizens fighting to save the UPMC hospital from demolition—the reality of “pioneer” life considerably less sexy and glamorous than Levi’s would have us believe. Although this work is not the show’s centerpiece, its powerful message reshapes the other images in the exhibition. 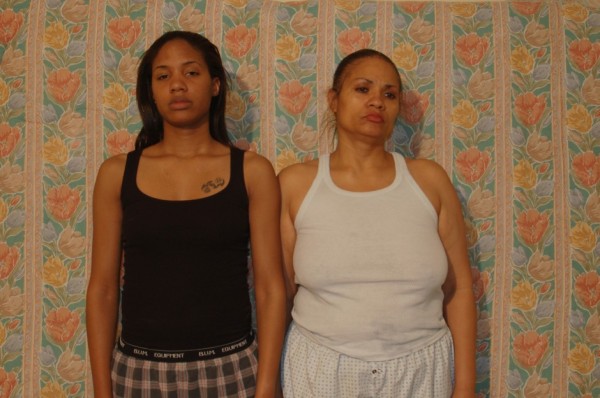 Most arresting are images in which the artist performs for the camera. Momme Portrait Series (Wrestle) (2009) shows the artist and her mother on a bed viewed from above playing affectionately at wrestling and then hugging intimately. Other gelatin silver prints in the Momme series put us face to face with the intense gaze of the artist while she is positioned near her mother, who also looks out actively, but seldom at the camera or with the same directness.

She performed more explicitly in a street performance, If Everybody’s Work Is Equally Important (2010), outside the Levi’s pop-up storefront photo studio in New York, documented by collaborator and video artist Liz Magic Laser. Here, Frazier mimes backbreaking industrial labor that gradually destroys the fabric of the globally manufactured denim pants and shirt that she wears. Chafing her clothing against the pavement, she appears as a fighter in this piece. Her performance brings to mind the “crawls” of William Pope.L from the turn of the 21st century, which similarly drew attention to economic disparity and racial stereotyping in the urban landscape (one of which took place in Houston in 2003, currently on view as video documentation at DiverseWorks). 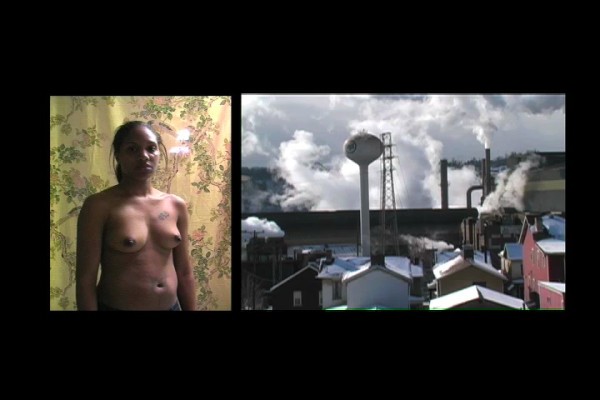 In another video in the exhibition, Self Portrait (United States Steel) (2010), the artist appears on the left side of the still moving image diptych. Opposite her steady gaze into the camera—naked torso fully exposed, hair disheveled, against the backdrop of a floral curtain—appears the landscape of Braddock, with smoke rising from industrial buildings and a water tower and power lines hovering over houses in the foreground. The smoke merges with the clouds in the distant background; industry fuses with nature, transforming the environment and infecting its population. Meanwhile, the artist continues to stare straight at us for the duration of the 3 minute 28 second looped video, her steadfast resilience and earnest vulnerability on full display.

These self-portraits of and performances by the artist most clearly and forcefully challenge us as viewers to negotiate the role of witness into which we are thrust. Frazier’s direct gaze is piercing, a studied gesture designed to make the viewer ask herself, “What am I going to do about the falsity of media representation?” or “How will I respond to personal documentary images?” or even “In what ways do these images of postindustrial Rust Belt deterioration resonate with the landscape of uneven development in Houston?” Frazier confronts us not only as witnesses to the realities she depicts, but as critical thinkers about our complicity in the social, political, and economic structures that shaped her life and her environment. 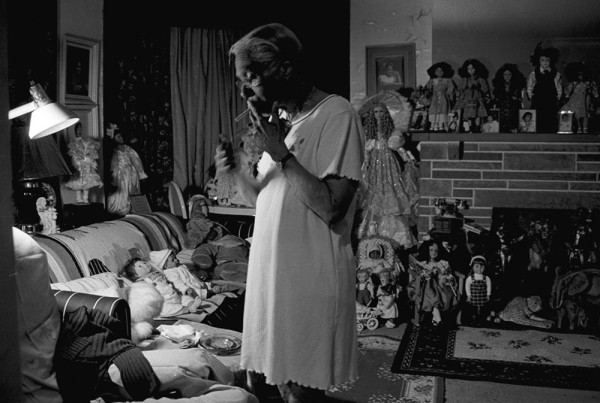 In the back of the gallery, we are caught in a more removed mode of witnessing when we examine the photographs of Grandma Ruby and her home. There is a tension in the show between images that ask us to witness the artist, witness the media, or witness Braddock and the demolition of the UPMC hospital and images that show the artist witnessing her family members. Although they are quite beautiful formally, the photographs of Grandma Ruby and her home position the viewer differently, as we are now asked to look through the affectionate framing and intimate lens of the artist. One craves a more descriptive caption for these earlier photographs or some other means of connecting to them critically, as in the visual activism of her more recent work. These photographs lack the finesse of Carrie Mae Weems, although they aspire to the narrative intrigue in works like The Kitchen Table series (1990).

Frazier’s work is most compelling when it addresses the audience directly. Witness shows the young artist developing a commanding sense of presence and, moving beyond the technical mastery of her photographs, establishing her critical voice. Her approach to documentary does not limit the act of witnessing to passive spectatorship or even to psychological engagement, but implores the witness to think critically about the connection between mediation and reality; between public health and public space; and between the self and the familial other.

Witness: Latoya Ruby Frazier is on view at The Contemporary Arts Museum Houston through October 13.

The artist and her work cuts through the nonsense that the genius of the capitalist world of phony advertisements fill our billboards and screens. She is able to chronicle the class based-race based healthcare system that the poorest people are subjected.

Great show. Frazier will have a second exhibition at UT’s Warfield Center from Jan to May 2015.