The Conversation is Global, But the Talk is Personal: Interview with TX 13 Curator René Paul Barilleaux 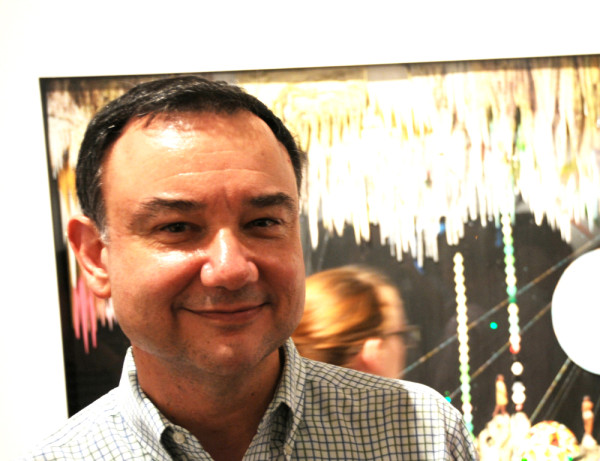 René Paul Barilleaux, Chief Curator at the McNay Art Museum, and one of a baker’s dozen choice-makers for this year’s Texas Biennial, talked with Glasstire the morning after last Thursday’s opening of TX 13 Group Survey Exhibition at Blue Star Contemporary Art Museum. If you thought the new International Style was go-local, think again.

Why do we do these biennials? Something I noticed some years ago is that if you look at place-oriented survey shows, no matter how disparate the individual works, the exhibitions tend to look much the same. Is there a template effect operating? Are jurors—perhaps unconsciously—looking for what they have seen before?

That’s a really good question. By means of comparison, this year I curated the Arizona Biennial, a single juror as opposed to a group of jurors… Maybe with one person, you may have more of a vision, or curatorial direction, but I don’t know whether as a way of capturing a group of artists in a geographical parameter, if these shows reveal anything more than that. Because, to me, they all have a sameness, as you said. Across the globe, there is a sameness to art.

So, the search for missing hometown heroes, what we might think of as the distinctive smell of the place—is that just an illusion?

I think so, to me it is. Because I have not seen that. I was in Mississippi before I came here. There was nothing like the Texas Biennial. So in the late ‘90s, I designed a state survey, because I thought—we need something. So we brought a curator in, and traveled around visiting artists… But in the end, it was like what we saw last night, or what I saw in Arizona. They had that feeling of sameness in range. That was 15 years ago. Certainly now, it is even more homogeneous.

Any show is just as good as the person who chooses it. You have the person who selects the work, and the collection of works that the selection is made from. So, there are these two constraints. For example, one of the things I said in my statement about the Arizona show, was that the people who were not selected for that show, their work was not necessarily any better or worse than those selected, but that it was not fitting into what I saw as my vision for that project.

So, you are putting the onus on the curator.

For artists, juried shows can be crazy-making.

I already got a package from somebody who said, “You didn’t put me in the show, but you should look at my work.” And that’s what I do.

What was the selection process this year, how did it work?

There was an open call, and the curators could also invite artists. We had 13 curators this year.

Was there the usual voting submissions in or out, the curators acting together as jurors?

Everyone worked separately. We did several rounds of proposing artists, looking at each other’s selections, and at the end, I had five artists to propose and I selected works by those artists. So, everyone was operating very independently. I don’t know how the other 12 curators were making their decisions; I was particularly interested in including the work of artists who I felt were under the radar, and were not widely known. That was my take. The people I selected, some, no one knew of them. But I happened to see the work. Other people may have been looking for hot names; they may have been looking for more agenda-based work. I don’t know. So, with 13 curators, that’s a lot of different voices.

There was no consensus?

Each brought in five-ish. We didn’t have to agree, no. I remember reading some feedback. Somebody, looking at someone else’s selections wrote, ” I would never put those artists in this show!” You know, everybody has a different approach. But that’s the point.

Last night, I had a guest from out-of-town who looked at my selections and made a comment about a sensibility that was consistent in at least three out of the five artists I included. It was kind of funny. It was about the process they were using—collage. I guess I was thinking about that process at the point I made the choices. I won’t reveal all of them, but one person I proposed was Shannon Crider, who did a small collage piece called “John In Drag,” a beautifully built-up piece using tiny pieces of paper.

When I walked in last night, I saw a lot of names I had never heard of, work I was not familiar with. The show didn’t read “Texas,” whatever that means now, but some pieces really got my attention.

People move around so much. You might be here for the Texas Biennial this year, but in two years you’re gone. What does that say? Are some people looking for a Texas aesthetic? I was never looking for that, because I don’t think it exists in the bigger picture.

So, if the point is not to bring out “the best,” or the “most Texan,” because we’re not going to buy into those notions…

I was interested in advocating the work of certain artists who I felt needed some more recognition, pushing those works out there.  Because I thought that would serve the artists, and the artists’ community.

Looking at the whole show, what do you think?

Like you, I saw a lot of work by people that I had never heard of. But it’s a big state, so that didn’t surprise me. But the overall impact felt very positive, and very energetic. I also appreciate the fact that there is also a lot of new media work, video. We really stretched to make sure that happened.

But why do we do these surveys? Why is there still a Whitney Biennial?

The other thing to consider is the impact of commercial art fairs on all this. Because now, wherever you live, you can get to an art fair and see work from all over the place. A hundred years ago, you had to make an effort to see what was going on. Now you have to make an effort not to see what’s going on. It’s flipped everything. And if you make work that seems regional, or that seems to have some sort of vernacular, it often gets maligned. If you make work that has some sort of Texas motif—it gets lambasted.

What was the point of such a massive state-wide Initiative for “open call,” when curators were essentially encouraged to bring in five-each of their favorite names? Were those invited artists required to pay the application fee? If its an invitational, I believe it should be labeled and matketed as such. This year’s Biennial was rolled out with such gusto, leading up to the open call… then efforts waned significiantly, as organizers tried to make the appearance they were going through the submissions. In the end, many might argue, you have a disjointed collection of vaniity exhibions, featuring the same “names” we see again and again, produced on the backs of working artists who never stood a chance.

Jordan, that is a well written post. Even artists that are included in this years “programing” find it totally transparent and self gratifying on the parts of most of the included venues. Texas Biennial folks took advantage of a large, regional art community–in regards to application fees.