It’s been well over a month since Pulse NYC, and I still have the jingle from Cameron Gray’s I’m an Indian Too in my head. Here it is accompanying a video walk through of his work, in an effort to transfer it to you.

Gray’s work was getting a lot of buzz at Pulse. At first, the kitschy collaged imagery seemed too cynical and easy, but after looking at the cluster of gif animations cascading by like ants on a dead bug, I starting thinking of Stan VanDerBeek’s old video animations and Nickelodeon’s You Can’t Do That on Television. The collage, though stationary, had the same effect—an overload of contradictory and unresolved images that were inexorably bound together in a crazy funhouse mash. 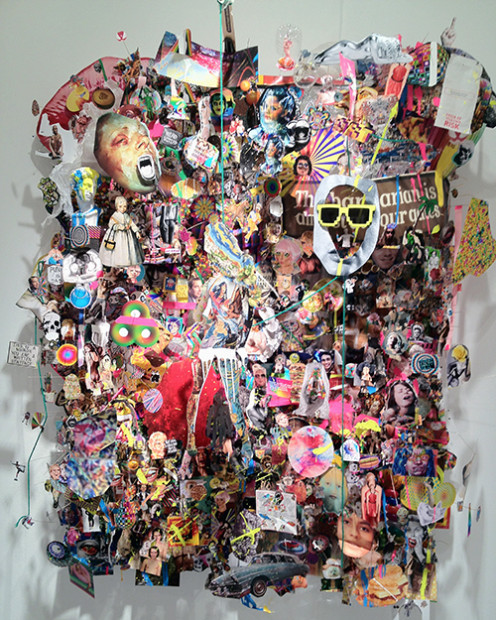 Gray’s work was in Mike Weiss’ booth, and Weiss seemed like the big dog in the room. That may be because he scolded me for hammering nails into the wall (which now I know is a huge no-no at art fairs.) To be clear, hammering nails into inch-thick temporary plywood walls didn’t feel right to begin with, but it was all we had at the time, and I was tired from uncrating, assembling and hanging seven of Alicia Ross’s pieces. Luckily we didn’t knock down any art on the opposite side of our booth. They just needed a little straightening. 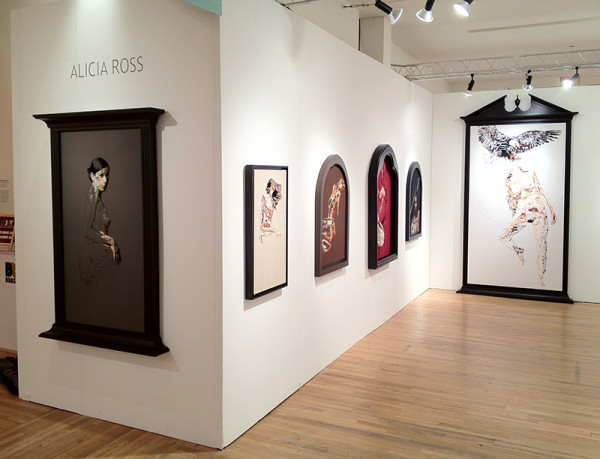 Disclosure: I am sharing a shot of my girlfriend’s booth—and yes, I am certainly biased—and yes, the booth looks quite normal and calm. But as you might imagine, we nearly killed each other in the mess that was the day before Pulse opened, hanging her life-size embroideries (with no glass: notice that one in the back with pristine white fabric? Combine that with dust, packing materials, drills and knives and hammers? Yeah.) I need some record of that and also to avoid getting the boot for not including it, so here you go.

In part 1, I wrote a bit about Frieze, and the fact that most of the good work was watered down a bit by the sheer supersized blue chip hype of it all. I think the same thing happened to Armory (never been so don’t quote me) and well, it happens to lots of things. Lollapalooza was pretty cool for the first year or two, right? Anyway, the point is that the smaller and more intimate setting of Pulse allowed for more comfortable examination of the work in the booths. If you wanted to go back and look at something again, you didn’t need a map or have to stop and use the restroom first. It was less Six Flags and more neighborhood pizza parlor. That was a horrible comparison. Here’s some more of the work for your pleasure and critique: 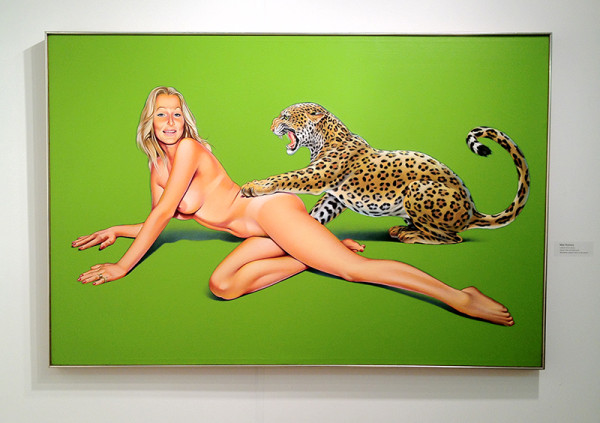 As long as we’re looking at ladies and wildlife, here’s a Mel Ramos I couldn’t help but wish was over my couch, but only if there were a Trans Am in my garage. Imagery like this makes me smell a mixture of lingering cigarette smoke and someone who just took a shower. Maybe it’s the retro macho thing. I can’t remember if the gallerist (Zemack Contemporary, Tel Aviv) said this was the first time it had been shown, but she did say it had been in storage for a long time. GT’s Robert Boyd talks about Ramos from the 2012 Pulse NYC here. 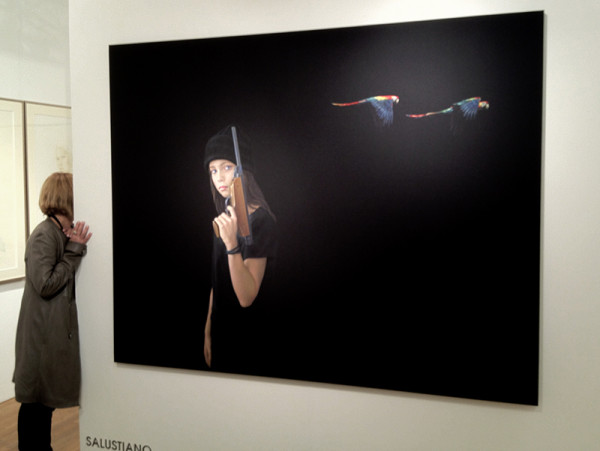 This was another seductive piece with a little more weight. Salustiano (Kavachnina Contemporary, Miami) does lusciously dramatic portraits, this one being no exception. I kept imagining this young girl as some vigilante that was hell-bent on freeing exotic birds from black market cages. It would make a good comic book, or an animated short film. 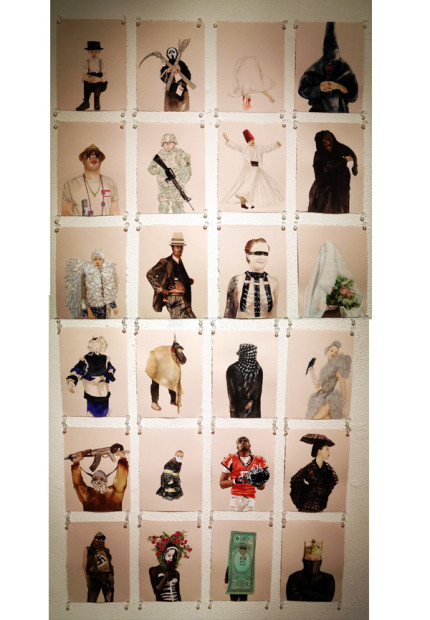 “Who Are We Really?” Dawn Black asks.

Dawn Black’s (Cynthia Reeves, New York) Conceal Project was a grid of little drawings depicting people and their personas—whether utilitarian, religious, or novelty. I loved how this rather simple collection made me think of identity (an overused term in arts criticism) and really ponder the question she was asking. 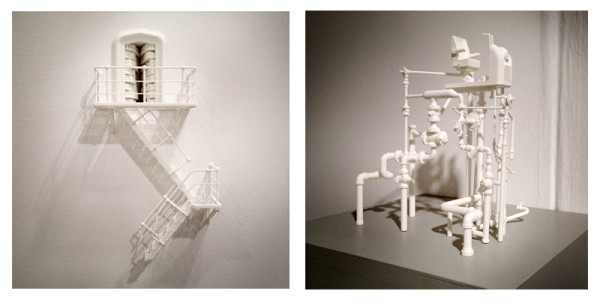 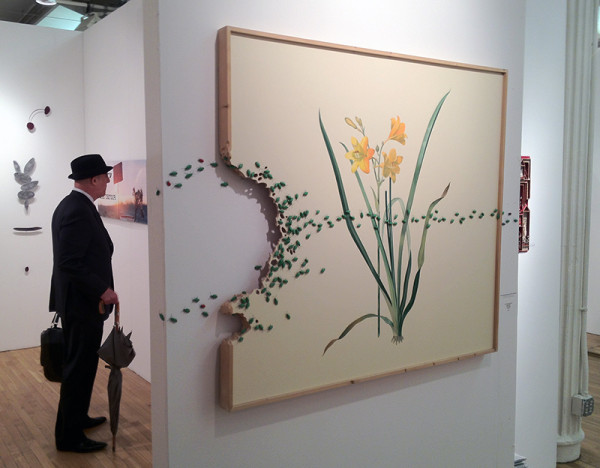 This is a fantastic piece by Jorge Perianes (Pan American Art Projects, Miami). All of his work was split, chewed or somehow purposefully dysfunctional. I was even more impressed that I caught René Magritte in the booth when I snapped this shot. 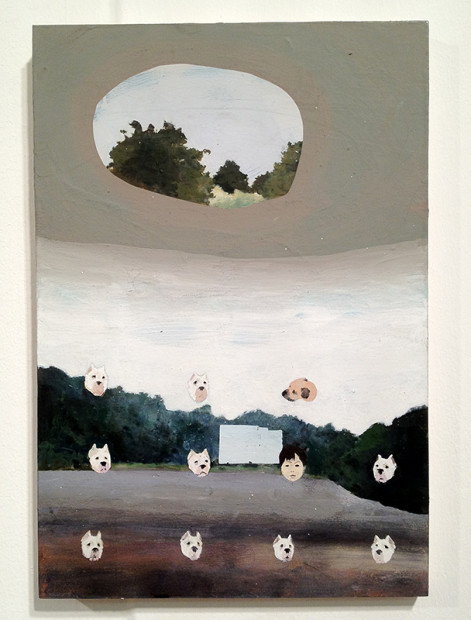 Siobhan McBride (Eight Modern, Santa Fe) had a fantastic collection of surreal paintings that kept me guessing. This one, Grid, has floating doggie heads (along with a little human head) set against a simple landscape, with a crude Turrell Sky Space/time portal encroaching upon the sky. I had no idea what was going on here, and I loved it. Other pieces of hers pair domestic interiors with arbitrary and subsconscious-like color fields, sometimes referencing filmstrips and nostalgic imagery, but mostly just insinuating some kind of supernatural event that just occurred, or is just about to occur. 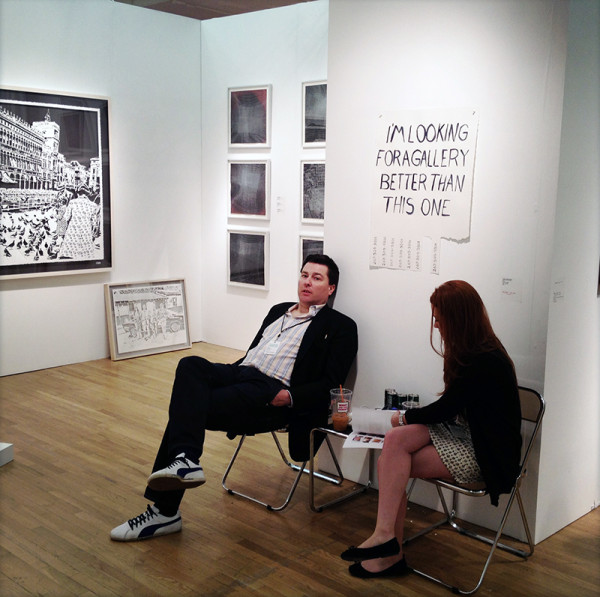 Gallerists… would you let your artists do this? 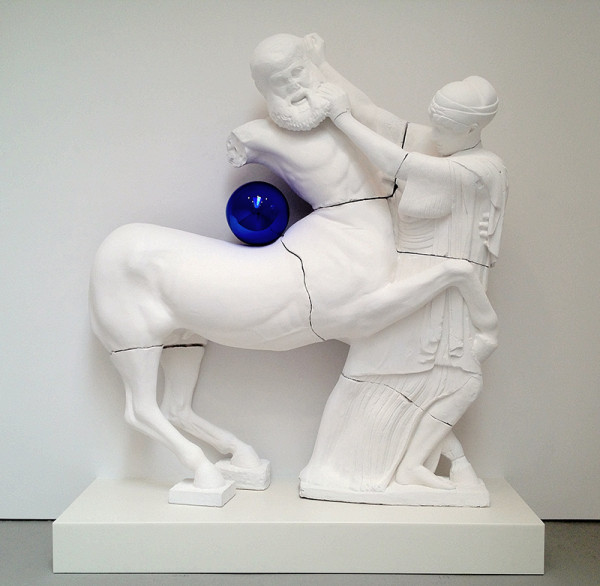 We hit Chelsea for some gallery death marching, but it seemed a little quiet since Frieze and Pulse were happening. The biggest news was Jeff Koons’s double header at Gagosian and Zwirner. We missed the Gagosian, but the Zwirner was pretty interesting. Saltz has already dived deep into both shows rather well, so I won’t attempt a rehash. However, it had some similarities to Sara VanDerBeeks’ show at Metro Pictures. The same interest in reflective spectraflame blue, and white marbly classical and/or minimal sculpture. 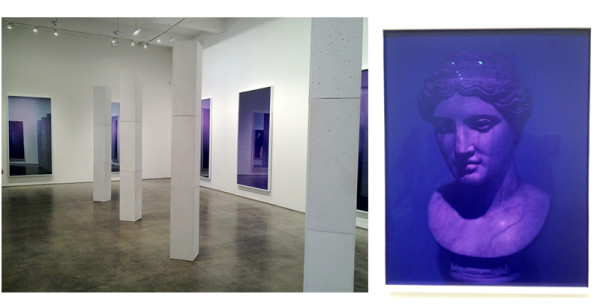 We tried to see MOMA’s showing of Rain Room, but the wait was three hours.  We decided to go to the Met instead, and it made me think of Koons and VanDerBeek again. 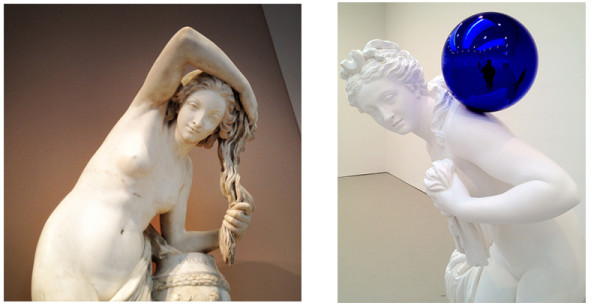 The Met vs. Koons

I saw Maurizio Cattelan riding his bike down 9th avenue. I wanted to chase him down but he was riding pretty fast. I wasn’t quick enough to snap a picture, so instead, here’s a shot of a fox fur hanging from the ceiling in Mood Fabrics. 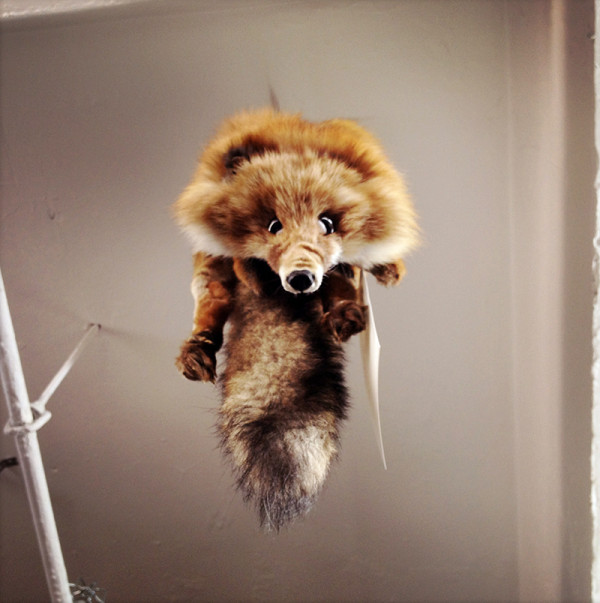 Is there one word for sad, grotesque and cute?

We also bumped into William Wegman and his weimaraners twice. Not so coincidental since he apparently lives nearby, but we had just been talking about whether we would see him again, and as we turned the corner, there he was. Doesn’t beat bumping into Jeff Goldblum three times in one day a few years ago—but just in case you were wondering, Wegman indeed walks his own dogs.  I love New York. All these personalities are just people, you know. 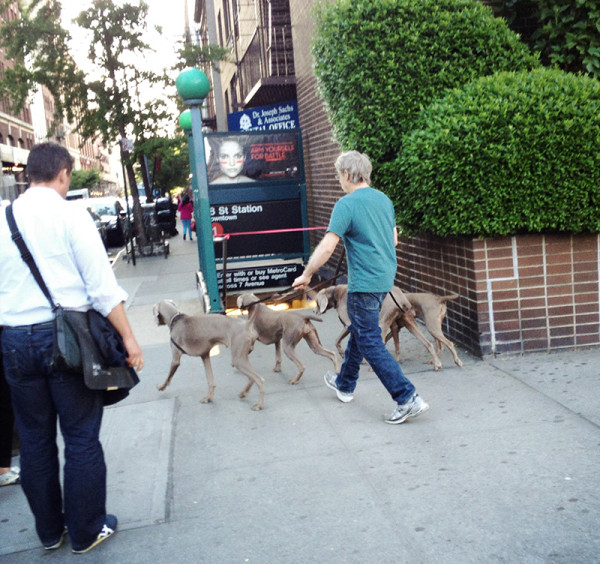 As our plane took off out of that fascinating little island with so much enormity going on, I had a familiar feeling of loss as I watched it get smaller and smaller. After landing back in Texas and driving out of the George Bush airport, across I45, down I630 and out 59, I kept wondering what would happen if I could take Houston or Dallas and smush it all in the same square footage as Manhattan. Then again, distance and fondness seem to have a great relationship.